1716 How to Make the World a Better Place 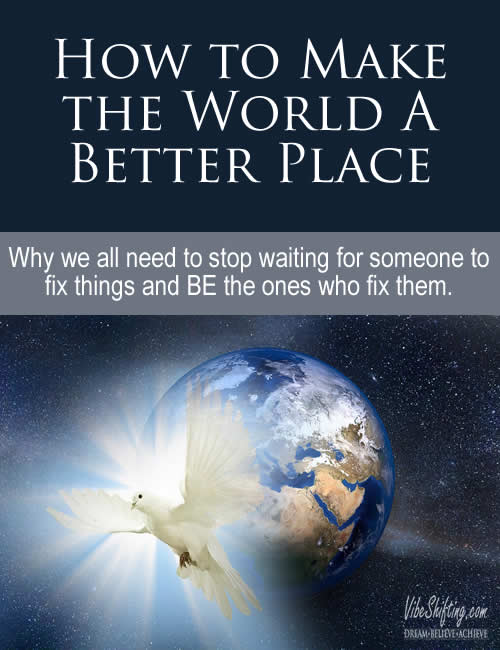 Hello everyone and welcome to the final episode of the 2017 season of The Vibe Shifting Show! In the spirit of the holiday season, today we’re talking about how to make the world a better place.

So, I’m going to start this off with a story about something that happened recently in my own life. Now, this may seem a little off-topic to you, but bear with me, because I promise it’s relevant to what we’re talking about today.

Back in November we had a very windy garbage day and, as is always the case when that happens, people’s garbage cans and recycle bins were blown all over the place. One recycle bin, it seemed, never got claimed afterwards, and someone put it under the communal mailboxes, presumably to make it easier for whoever owned it to find it. No one ever did claim it, though, so the box just sat there.

Over the following days, people started dumping their junk mail into that box. And then people started throwing their garbage and dog poop bags into it, too. And then it rained and then it snowed and all the junk mail got wet and started growing mildew. And still people kept throwing garbage into it. The box overflowed and dog poop bags and disposable food containers started piling up around it.

Has the state of the world these days got you down? This will help! #BeTheChange Click To Tweet

“Somebody” Should Do Something!

It was gross. And it drove me crazy every time I saw it. “Why are people so clueless and horrible?” I wondered in fury. Why would anybody throw their dog poop bags into a RECYCLE BIN?!?

I started cursing all dog owners everywhere for their complete contempt for the other people who shared this space, and I decided they were an example of everything that is wrong in the world.

I was furious with my neighbours for being so bloody lazy that they couldn’t be bothered taking their junk mail back home to their own recycle bins.

And I wished in annoyance and disgust that somebody would do something about this eyesore.

And then one day it occurred to me that I was somebody, and I could do something about it.

So the night before our next garbage day I filled two garbage bags with all the mouldy junk mail and dog poop bags from that recycle bin. I picked up all the flyers that had collected along the fences after being blown out of the bin over the past few weeks, and I picked up all the garbage that other people had dropped beside that bin. And then I confiscated the bin itself so that the same thing would not happen again.

And just like that, the mess was gone. And it wasn’t getting me stressed and angry anymore. And my neighbourhood looked so much nicer. And, presumably, at least some of my neighbours breathed a sigh of relief that “somebody” finally did something about it.

And all it cost me was about ten minutes of time and two extra garbage bags.

The Moral of The Story

The moral of this story is that so often we see things happening in this world that we don’t like – whether they’re big things or small things. And we wonder how these things can be. And we ask ourselves why something doesn’t get done about it. We wonder why no one fixes these things and get ourselves all worked up about “the unfortunate state of the world”.

And it never occurs to us that maybe, just maybe, we’re the ones who can fix these things.

What if, instead of waiting for ‘somebody’ to fix things, we decided to be that somebody and fix it for everyone? #BeTheChange Click To Tweet

And I get that it can be disheartening and exhausting to deal with this stuff day in and day out. I do. The morning after the garbage day on which I got rid of all that mess under the mailboxes there was another lost recycle bin that I saw as I headed out the door to take the kids to school. By the time I got home and confiscated that one, people had already thrown more junk mail and, yes, another bag of dog poop into it. (Growl!)

So, yes, there are moments when it’s easy to get angry. And it’s easy to get yourself into that mind space where you’re tempted to just start hating the world and everyone in it because it sometimes feels like no one cares about anything anymore and no one ever thinks about anyone but themselves.

…But We Must Never Give Up Hope

But here’s the thing: It’s precisely when we feel this way that we have to take the time to stop and breathe. And remind ourselves that, despite what we see in our little corner of the world, most people aren’t awful.  Most people still care about others and about this planet. Most people are still good people.

It’s precisely when we feel the most hopelessness about the world that we have to keep hold of hope.

It is precisely when things seem bleakest that we must refuse to ever give up working for something better. 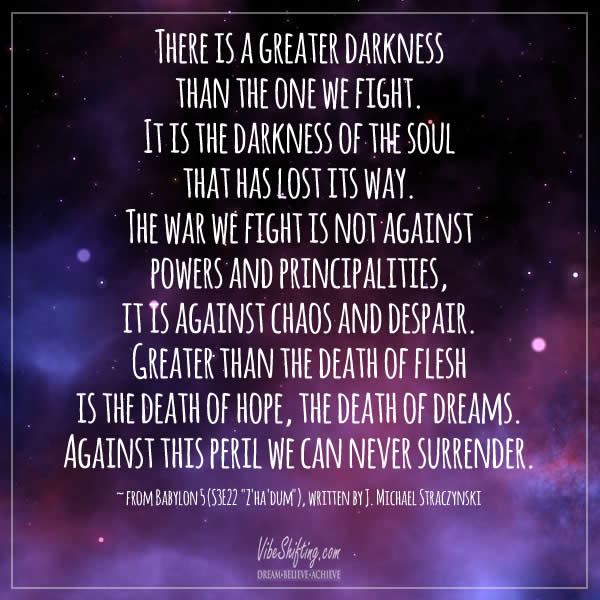 Yes, we have problems. Yes, some things are pretty bad right now. And yes, it’s a scary time for everyone. But you know what? Maybe it’s in realizing what’s happening that we will finally be galvanized to actually do something about it.

We can make a difference.

But it has to start with each and every one of us.

Because if you, personally, aren’t willing to take a stand and make a change to make this world a better place, then how can you expect anyone else to?

And if all of us do that, all those tiny little flickers of light we send out will start to create something bigger. In making our little corners of the world better for ourselves, our families, our friends, and our neighbours, then all together we have the effect of making the entire world better.

Again, it doesn’t have to be big splashy things. It just requires a willingness to do good things, and a commitment to think before senselessly doing things that make the world worse for everyone.

7 Ways to Make the World a Better Place

There are any number of little things you can do to bring light into the world. Just off the top of my head, you can:

It is precisely when things seem bleakest that we must hold on to #hope and keep working for something better. #BeTheChange Click To Tweet

Lighting the Fires of the Heart

A Challenge for the Coming Year

Now, at this time of year, I usually encourage my listeners and readers to work on their business and life plans for the coming year. But, given all the challenges that our world is currently facing, this year I’d like to challenge you to do something a little different. This year I’d like you to think about what values matter to you and about what kind of world you would wish for, both for yourself and for your children and for their children.

I am asking you to wake up every morning over the coming year and ask yourself just one simple question: “What can I do today to make this world a better place?”

And I am asking you to listen for the answer with an open heart and an open mind, and to then go out and DO the thing that comes to you. Do this every day.  Because if every single one of us does that, we really will make the world a better place.