Why We Must Speak Out When Darkness Falls 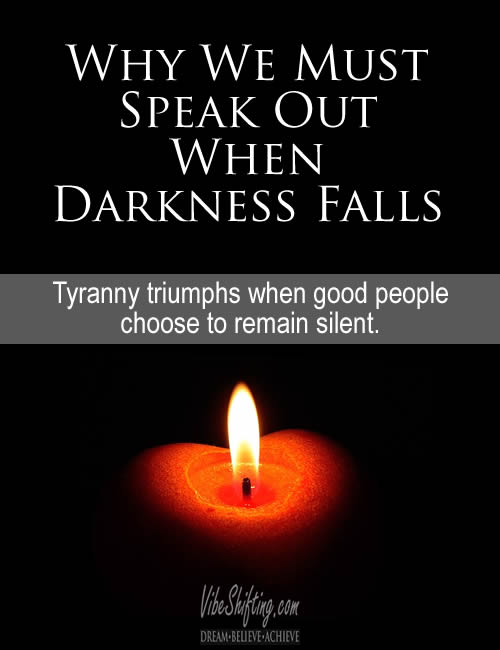 All right. The Trump article. You knew it was coming. I have struggled with this post for two weeks now, trying to come up with something to say that wouldn’t just add to the darkness and despair that so many are currently feeling. But I cannot stay silent on this any longer. It is time to speak out.

To speak out or stay quiet?

There are many in the writing groups to which I belong who believe that we (authors and bloggers) should leave politics off the table entirely when it comes to interacting with our readers. In other words, wherever we stand on the recent U.S. election, we should keep out mouths shut for fear of angering those on whom we depend to buy our books.

There is only one way to avoid criticism: say nothing, do nothing, and be nothing. ~Elbert Hubbard

Just stay quiet, no matter what you believe, and let it slide. Don’t be “political”. Don’t rock the boat. Don’t say anything that could be interpreted as inflammatory or that someone who reads your work might get upset about.

In principle, I supposed it’s a reasonable theory. If you never speak out, you never upset anyone and no one gets mad at you. Just put up and shut up and look the other way.

But here’s the thing: Sometimes, you have to speak out, and damn the consequences. Because sometimes silence is dangerous. Sometimes, silence is supporting that which is fundamentally unsupportable.

Sometimes silence is the ethical equivalent of selling your soul.

All tyranny needs to gain a foothold is for people of good conscience to remain silent. ~Edmund Burke

And I can’t stay quiet about this. Despite people’s attempts to normalize this whole situation, there is NOTHING normal about this. Not at all. And the world has gone down this very dark path before.

And they did the exact same thing then: “Well, he can’t possibly mean what he’s saying. It’s just political grandstanding and rhetoric.” and “Well, it’s just one country, how dangerous can it be?”

A dark and dangerous path

The last time the world tried to shrug off or minimize this kind of “rhetoric”, it ended up in a war that cost tens of millions of lives, and ruined millions more.

We CANNOT let that happen again.

This is what scares the hell out of me — all these “chill, people it’s not that bad” comments all over the internet right now — this is exactly how it started in Nazi Germany. One man said the same things then that another man is saying now.

And then, as now, sane people thought that surely no one would truly believe or actually do the things they were starting to hear about. Normal, everyday people put their blinders on and locked themselves onto the promise of making a country great again.

See no evil, hear no evil

They ignored everything else that was said, and they ignored the terrible, horrific things that had already started to happen, in the name of national greatness.

They didn’t want to see.

They didn’t want to know.

And they were too afraid to speak up.

And one small step into darkness led to another and then another.

And one day people looked around and realized where they’d ended up.

And by then it was too late.

Then they finally came for me…

Ever since the Americans made their big decision, Martin Niemöller’s poem, First They Came, has been echoing through my head.

Then they came for the Jews, and I did not speak out – because I was not a Jew. When they finally came for me, there was no one left to speak out. ~Martin Niemöller

Replace the “socialists” and “trade unionists” with blacks, gays, Muslims, and women and it’s exactly the same thing now.

And for the love of God, think.

For the love of All That Is… SPEAK!

There is no “them”, only us

The world has seen this kind of darkness before.

And the world stood by then because “they” were the ones being targeted, not “us”.

So it didn’t matter. And the world stayed silent.

But the problem with that kind of thinking is that “they” is nebulous. Even if you are somehow able to rationalize terrible things being done to a group other than your own, sooner than you think “they” becomes everyone who isn’t in the immediate inner circle of the one preaching hate. (And in this day and age there is NO excuse for a lack of compassion and justice for ALL people.)

Sooner or later, YOU will become THEY. And there will be no one left to speak out for you.

We MUST understand and accept that there is no “them”, there is only “us”, or we risk repeating the horrors of the past.

Speak out and speak up

Decades ago, the world stayed quiet for too long and hatred became the dominant power. The world was drawn into a desperate war that would decimate 3% of the population of the entire planet.

Millions of other lives were destroyed.

All because hatred was allowed to grow unchecked.

All because millions of good people remained silent when they should have spoken out.

WE create the way out of this

I struggled with this article because I did not want to add to the darkness and despair. I didn’t want it to add to the fear. I tried so hard to understand how this could happen. And in my despair, I could not see a path through the madness that threatens to engulf us all.

And then I realized: we create our own path through this.

And we do that by speaking out and speaking up.

We do it by reaching out our hands and our hearts to those in need, wherever we happen to be.

We do it as my father would have, by helping others in whatever ways we can, whenever we can. By making this world a better place, in any small way in which we can.

Because it is in those small acts of courage and love that we actually take the steps to create the world that we do want. Together. All of us. No matter who we are or where we come from or what our backgrounds are.

We must focus on what we want

And from an LOA, Abraham-esque perspective it occurred to me that perhaps this period of tumult and contrast that we are now in is necessary to help us all fully realize what we don’t want. So that we can completely clarify our focus on what it is that we DO want.

And that is why we must speak out.

When the darkness seems worse, this is the time when each one of us must take the initiative to be the light that repels it.

And for all those being persecuted right now who want only to live their lives in peace and joy, in friendship with all people everywhere, know this: You are loved. You are valued. You are accepted exactly as you are. And most of all: You are not alone.

I have said this before, but it bears repeating now more than ever: The darkness cannot win so long as a single spark of light remains.

And each and every one of us has the ability to be that light.