Love or fear; which one do you choose? 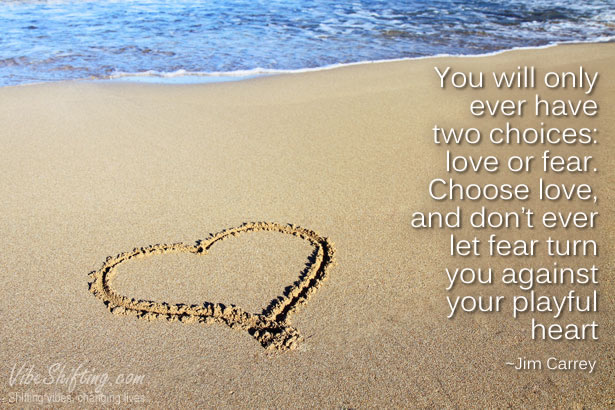 Last month, actor Jim Carrey delivered the commencement address to the graduating class at the Maharishi University of Management, and I have to say I was really impressed with the inspirational content he delivered to the audience; he said some pretty deep stuff, stuff that I hope all those graduates take to heart as they move out into the world, the most important of which was that everything we do in life comes down to a choice between love or fear.

Carrey’s full commencement address can be found on YouTube (see link below). The first part is mostly just jokes, but he gets into the good stuff just after the 10 minute mark, so if you haven’t got half an hour to watch, then forward through to that point.

There were so many really insightful things that were said in this address (I highly recommend checking it out when you get a chance), but there were a few points that really stood out for me that I wanted to share with you today…

Is the safe route really a sure thing?

In last Friday’s podcast episode, I talked about how important it is that you go out there and live your life, without holding anything back. I talked about how so many of us let fear dictate the course of our lives, rather taking the chance to do what we feel called to do most strongly. And this sentiment was echoed in the speech Carrey gave; he talked about how his father had great comedic talent but that he had never believed that a career in comedy was possible, so he chose the safe route and became an accountant, believing that this was the wiser choice for stability and security. But years later, he was laid off from that safe, secure job. Carrey said that this taught him that “you can fail at what you don’t want, so you might as well take a chance on doing what you love.”

Of fear, he said:

Fear is going to be a player in your life, but you get to decide how much. You can spend your whole life imagining ghosts, worrying about your pathway to the future, but all there will ever be is what’s happening here, and the decisions we make in this moment, which are based in either love or fear.

This really stuck with me, because what is the point of choosing the safe route if the safe route can still fail, especially if there’s no happiness to be found along that route for you? If you’re always going to feel like you’re meant for something other than what you’re doing, and in the end, you still have a very real possibility of that security blanket being torn away anyway then why not follow that other path, the one you most want to follow, instead? Yes, you may fail. But you may fail in the safe choice, too. So do you choose love or fear?

But I’ll never be good enough for that

So many of us look towards our idols; the ones who’ve already done what we want to do, with a mixture of excitement, envy, and sadness. Because we wish so desperately that we could just be where they are; we want so much to just be able to figure out that magic key that will get us to where we want to be. But the problem is that at our core, we don’t really believe that it is possible for us to ever get there. We don’t really believe that we could ever be what we most want to be. Because we’re not sure we really deserve it. Because we’re not sure that we’re good enough to make it.

Carrey said something very wise in his speech about this very thing:

You look at a person like me and say, “How could we ever hope to reach those kinds of heights?”

This is the voice of your ego. If you listen to it, there will always be someone who seems to be doing better than you. No matter what you gain, ego will not let you rest. It will tell you that you cannot stop until you’ve left an indelible mark on the earth, until you’ve achieved immortality. How tricky is the ego that it would tempt us with the promise of something we already possess.

That last part is really important. The voices you hear inside your head, telling you that you’ll never make it, that you’re not good enough, that you still have to do more; the voices that compare you to everyone else… you must stop listening to them. Because nothing you do will ever satisfy them. You could have achieved every goal you’ve ever had, earned every accolade available and won every prize that’s out there, and those voices would still tell you that you’re not good enough. But it’s not true; what those voices say is all just smoke and mirrors. And that last sentence is the key to letting them go; once you begin to realize that you are an integral part of something much greater than what you see as you, once you realize that you exist beyond space and time, that you have always existed and that you will always continue to exist, beyond death and beyond birth; once you begin to remember that you are a part of infinite source energy, then you can see how ridiculous those voices really are. You are infinite love; limitless and without end. The voices are just fear.

But what if I messed up my big chance?

Regret. It’s a heavy burden that so many carry, believing that their one and only chance for ever achieving the things they most want to achieve, or of becoming all that they most want to be is gone. A choice made of fear, forcing them to forever follow a path that they never really wanted, and which they resent more and more with each passing day.

But the thing is, there is no “last chance”. That’s not how the Universe works, unless you ask it to work that way. Shift your energy, shift your mindset, shift your focus and shift your beliefs. And as you shift, the Universe shifts with you and for you. You are in control. And you get as many chances in life as you want. You just need to get yourself clear on what it is that you want.

Your job is not to figure out how it’s going to happen for you, but to open the door in your head and when the doors open in real life, just walk through. Don’t worry if you miss your cue. There’s always doors opening. They keep opening.

So open the door in your mind. Open yourself to possibility. Allow yourself to dream and allow yourself to believe in that dream. This is how the doors show up; trust that they will be there as you work towards the dream, and don’t ever be afraid to step through them when they do. Love or fear? Love will carry you through, but fear will hold you back. So which one will you choose?