Enough With the Worst Case Scenarios! 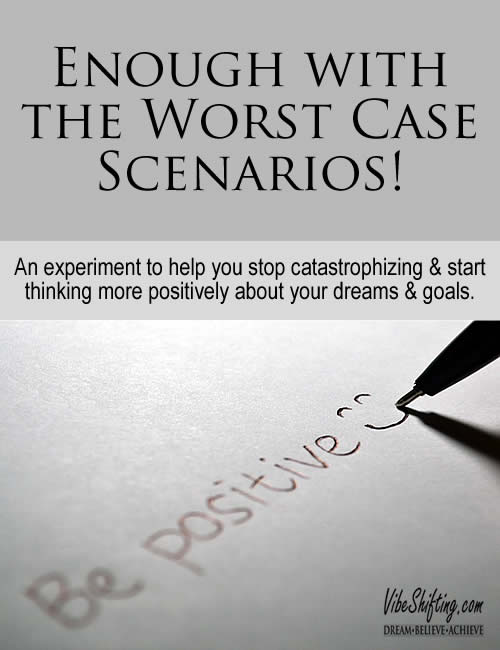 When you think about your biggest dreams and goals, do you have a tendency to dwell on the scary, negative things that could happen? All the worst case scenarios of things that might go wrong if you really let yourself go after what you really want? You’re definitely not alone in that — it’s something we all do, to one extent or another. And it’s one of the big things that kept me from going after my own dreams, until I had a paradigm-shifting moment while watching a Hollywood movie.

In the movie After Earth, starring Will Smith as the ghost ranger, Cypher Raige, there is a point where Smith’s character says to his son: “Fear is not real. The only place that fear can exist is in our thoughts of the future.” In essence, our fears are entirely imaginary; they are based entirely on things that we think may happen in the future – but those things don’t exist right now and may never even become a reality.

So why do we attach such strong emotions and importance to them? Even if there is a tiger standing right in front of you, your fear is based on the thought that it might eat you, even if at the moment it is not eating you, and even if it may choose to ignore you, walk away, and never eat you. Fear is not real. Danger, as Smith’s character goes on to say, is very real, but fear is entirely based on hypothetical scenarios about what could happen.

When I first saw the scene in After Earth, it was a paradigm-shifting moment for me. It made me realize just how ridiculous most of the fears that I had around my dreams really were, and it was one of the key moments in helping me get through them (thank you, Will Smith).

What I realized was that all our fussing and fretting over our imagined fears just makes us miserable in the present and attracts more stuff for us to worry about. The more importance we attach to something, the more we seem to worry about it and the bigger our fears seem to get,  until we’ve got ourselves in full-fledged panic mode, imagining all the worse possible outcomes to the situation and freaking ourselves out over how we will ever possibly  be able to deal with it.

This stuff is covered in my new book, fearLESS: How to Conquer Your Fear, Stop Playing Small, and Start Living an Extraordinary Life You Love. If you’d like to learn more about the book, you can do so right here. You can also order the book directly on Amazon.