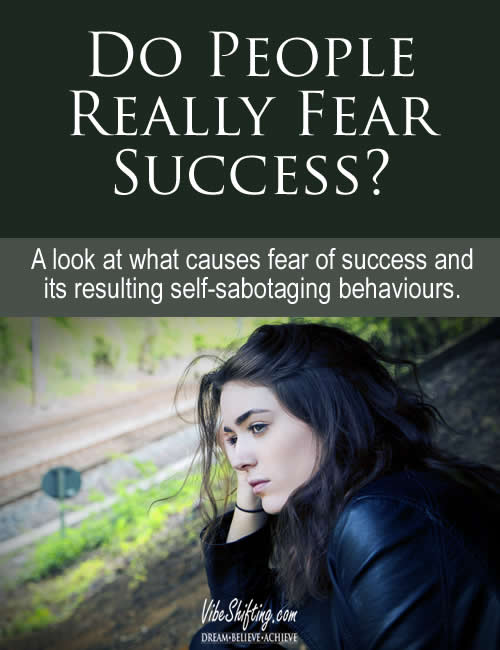 Most people are familiar with concept of fear of failure. But for some people, it’s not failure that scares them most, but the fear that they will succeed. And while the fear of success is actually one of the most common fears out there, it’s a concept that seems counter-intuitive on the surface because, really, don’t we all want our dreams to come true? Can people really fear success?

Fear of #success is usually a subconscious thing. Could it be what's holding you back? Click To Tweet

On a conscious level the answer, of course would be “yes”, but the really interesting thing about this particular fear is that most people aren’t even aware that that’s what they’re dealing with; being afraid to succeed is almost always an unconscious thing. And this can make it particularly difficult to deal with, because it has to be brought forth into your conscious mind — you have to become consciously aware of the fact that you have it — before you can actually begin to do anything about it.

How to tell if you fear success

There are many facets to the fear of success, the most common of which involve the subconscious beliefs that:

In looking at these beliefs, you can see that when we fear success, it almost always arises because, on some level, we think that the bad parts about being successful in our goals will outweigh the good parts (and there are always going to be both good and not-so-good changes resulting from our success).

If we think the bad parts of #success will outweigh the good parts, we'll #selfsabotage Click To Tweet

If your subconscious mind is focused on what it sees as the not-so-good consequences of your success, then you will be relentlessly, but unconsciously, sabotaging yourself so that you don’t succeed (and therefore you won’t have to suffer the not-so-good stuff).

As American motivational speaker Dennis Waitley once said, “success can be heavy”; it carries a burden with it, and it means that things are going to change. If we are successful with our goals, our lives will change, and not all of those changes are going to be ones that we like. That’s just the way it is sometimes.