A Gift of Silence in a Noisy World

Yesterday evening the power went out for over an hour. A power failure is unusual where I live especially when there is no apparent reason for it (it wasn’t stormy yesterday).

I spent the first few minutes being irritated because I had lost Internet connectivity. And because it was dinner time and I wouldn’t be able to cook anything (I get cranky when I’m hungry).

Then I started worrying that if the power was out for too long, everything in the fridge would go bad, and I was particularly annoyed about this because ice cream was on sale went I went grocery shopping, so I stocked up for the kids and had three tubs in the freezer.

Does a big power outage count as a legitimate reason to eat all the ice cream for dinner? #ottawa

Then I stared out the window for a while and wondered what to do with myself.

And it was only then that it dawned on me how very, very quiet it was.

The sound of silence

No humming of the refrigerator, no muted roaring of the air exchanger, no machine noises at all. There was just… silence; pure, untainted silence.

I decided to work on research for the next book.

When the power came back on, it occurred to me that I had just missed a beautiful opportunity. Instead of research – which can be done with the usual background noise – I could have spent the time just drinking in that beautiful, blessed silence. I could have used that time to feel how wonderful it was to just be quiet and alone.

I didn’t recognize the gift I had been given for what it was because I was too busy being miffed about my lack of Internet connection.

In a noisy world, silence is a gift

So I started to wonder: why had I been unable to accept this gift? Why do so many of us struggle with unexpected moments of silence and solitude?

Is it because we’re afraid we won’t like the company we find ourselves in without the distraction of others?

Or is it the fear that, without the noise and constant bustle drowning out our thoughts, we’ll find that we may not have any that are truly our own? 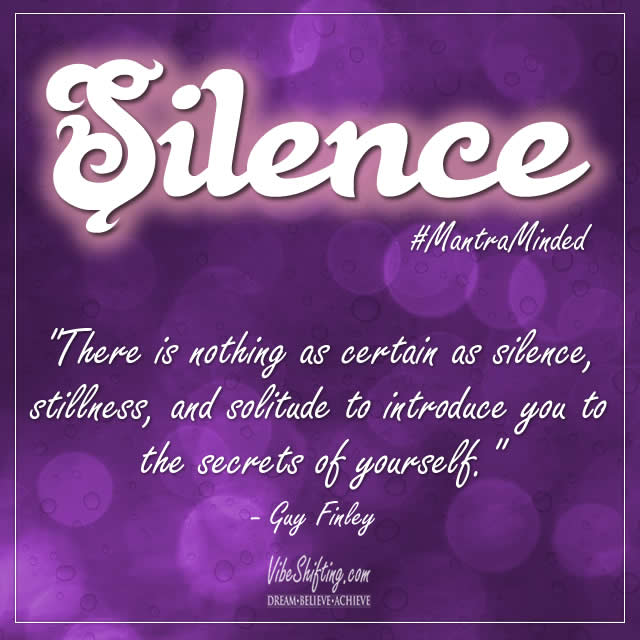 Why is it that we fight so hard to avoid the silence that allows us to hear what’s really going on inside?

The silence that allows us to know who we really are.

Filling up the void

We see it as a void, so we fill it up with “stuff”. Music and gadgets and television and talking-but-not-listening.

A meaningless fury of sound and lights and movement and motion, designed to make us forget that there is something underneath, waiting patiently for our return.

Waiting for us to remember who we are.

But what if we turned everything off?

Silenced the world and the outside voices.

And just listened to the sound of our Selves.

Would we be surprised by the depths that we would find?

Would we come to know ourselves once more, the way we did as children — innocent in our joy of Being, and delighting in the wonder of being alive?

Silence the world for a moment and just listen to the sound of your Self... #mindfulness Click To Tweet

The eloquence of silence

If we stopped to listen – if only for a moment — to the sound of our own hearts beating, would we remember, then, that we are already all that we could ever hope to be – and more?

That, perfect in our very imperfections and exactly as we are in this moment, we are the embodiment of a love greater than we could ever hope to understand?

Let me sit here, on the threshold of two worlds. Lost in the eloquence of silence. ~Rumi

If, like Rumi, we were to sit on the threshold of two worlds – poised on edge between the seen and the unseen, the outer and inner — would we, too, discover profound wisdom within us?

In the “eloquence” of our own silence, would we be able to sense the ineffable?

Would we feel the currents that bind the Universe itself together, supporting, connecting and empowering us all?

Would we see the unfolding fractal patterns of infinite realities branching out and converging again in endless cascades of possibility and potential?

Would we hear distant stars colliding and entire worlds being born? The echoes of Time itself taking form?

If we stopped being afraid of the silence and allowed ourselves to understand our own miraculous nature, would we find that we are only ever as alone as we choose to be?