Infinity and the Nature of Reality 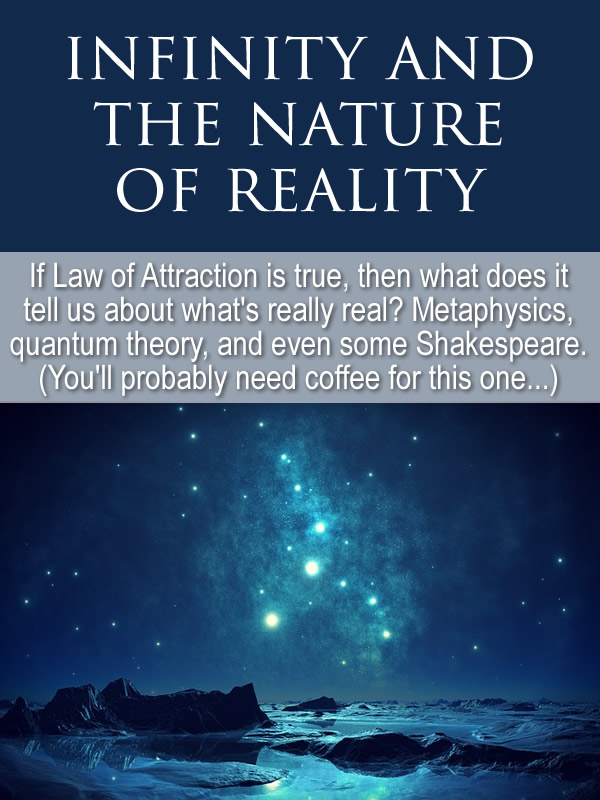 All right people – batten down the hatches and hold on tight because today we’re diving headlong into the heavy-duty world of metaphysics and philosophy, and we’re answering a question from one our Vibe Shifters Tribe members about infinity and the nature of reality…

I listened to an Abe Hicks segment and the person in the hot seat described how Source would “see” everything, as a clump of universes connected together by a network of light. But, is it finite, or is there infinity? Or, is Source infinite and its mere expansion creates all this stuff?

Is reality finite or is it infinite? This is an excellent, question and one that no one currently has a definitive answer to. One of the theories coming out of the quantum physics field right now tells us that there are infinite parallel realities; every time any one of us makes a decision, or has ever made a decision, or ever will make a decision — no matter how big or how small — a new reality is created.

Most of the decisions are not life-changing and the parallel worlds that are formed are more or less the same. But some decisions are life-altering and the worlds they create are very different. And they are infinite… think of a fractal tree branching off forever. And multiply that by every person on the planet that ever was or ever will be. In this theory, there are infinite parallel realities.

Solipsism: Are you the only thing that’s really real?

There is a philosophical theory known as solipsism, in which you are the only thing that’s really real. In this theory, there are no others, and the individual mind is the only reality. This would mean that, in your reality, I’m not really real… I’m just a construct that your mind has created for its own reasons. As is everyone and everything else in your reality, too.

In some interpretations of LOA, it’s the only possible theory that makes sense, because if we really are all-powerful and have complete control over what happens in our experience, then other people can’t exist because it would lead to too many “exceptions” to the Law. (You create your own reality “except” for when someone else is interfering.) So, in this theory, all those other people out there (including me) are created by YOU – they are like fictional characters that behave exactly the way the script YOU wrote for them tells them to. They ONLY exist at all because you dreamed them up and wanted them there, exactly as they are.

Think of this theory like a sky full of soap bubbles… there may be lots of soap bubbles (i.e. people) out there, but they each exist within their own bubble and what happens in one bubble can’t be affected or controlled by what happens in another bubble. So, each one of us has our own closed reality and all the things and people in it are basically figments of our own imaginations, or constructs of our own minds, created because we believe and expect them to be there. And that reality is constantly shifting and changing as our thoughts change; in every moment, we wrap a brand-new reality around ourselves, or shift from one reality into a new one, with each thought and belief. In this interpretation, there is no outside Source… the individual mind is the ONLY thing that exists

Shared realities: co-creating with others

In other interpretations, this is a shared reality (the other people out there are objectively real and exist outside and independent of our own minds). What we experience of those people is still what we’ve drawn to us through our own beliefs and expectations, but we draw the “real” people rather than just fictional characters that we have created.

And the reality we create when other people are involved is created co-operatively with those other people, regardless of whether we “like” or “dislike” the situation that is created (it is created out of our expectations, not what we want or don’t want).

Think of this one like a great big computer game. You get to create your avatar (your body) and you enter the game as that avatar. You’re here to play. And to learn. And to have fun. And just to experience stuff. But one of the conditions of joining the game is that you have to forget who you really are and become your chosen character. Total immersion. Total amnesia. Not even knowing that you are, in fact, creating the game environment as you play. So is everyone else, of course, but you draw to you what you are a match to, so the co-creations work out.

The divinity within: you’re not OF Source, you ARE source

In still other interpretations, we get into the concept of the divinity within; we are not just OF Source, we ARE Source, seeking new experiences and perspectives to expand itself, and thus becoming billions of individuals with unique identities, thoughts, and experiences to add to the “cosmic database” of All That Is.

Think of it as drops taken out of the ocean and carried away — no matter how far they go, they are chemically indistinguishable from their Source, the ocean. Whether they are taken to a jungle or a desert or a huge concrete city, each and every one of those drops is still Ocean, still Source.

Separated from that source, they are not as powerful (a drop of ocean does not have the same power that the full ocean does), but they are still Source. And eventually, they all return to that Source; all water on this planet returns to the ocean eventually. It might take days, it might take thousands of years, but it all goes back to the ocean. We, essentially, are those drops — temporarily separated from the whole of Source, but still undeniably and just as powerfully… Source.

So, what’s the answer to the question already?

There are more things in heaven and earth…

Wait for a clear night and go outside and look up at the stars. Ask yourself how many there are and how far they go. According to astronomers there are about 100 BILLION stars in our galaxy alone and there are, at minimum, 100 BILLION galaxies in the observable Universe. That’s ten thousand billion stars out there. And that’s just what we can see… imagine what else is out there that we don’t know about yet. And there are still mysteries here on earth – it’s said, for instance, that we know more about the outer reaches of space than we do about the deepest reaches of the oceans.

There are more things in heaven and earth, Horatio, than are dreamt of in your philosophy. ~Shakespeare, Hamlet (I:v)

The point I’m trying to make here about this whole question of infinity and the nature of reality is that there is so much that we still don’t know, don’t understand, and can’t even begin to imagine. But I do believe that we create it as we go. It wasn’t until after Gene Roddenberry dreamed up communicators on Star Trek that cell phones were invented, for example. And the X-Prize foundation is currently running a contest to award $10 million to the team that creates a working medical tricorder. There’s no end of evidence out there that we create what we believe we can. And it all starts with someone’s dream. And dreams, my friends, are infinite. I believe that there are more things in heaven and earth than have yet been dreamt of in any of our philosophies…