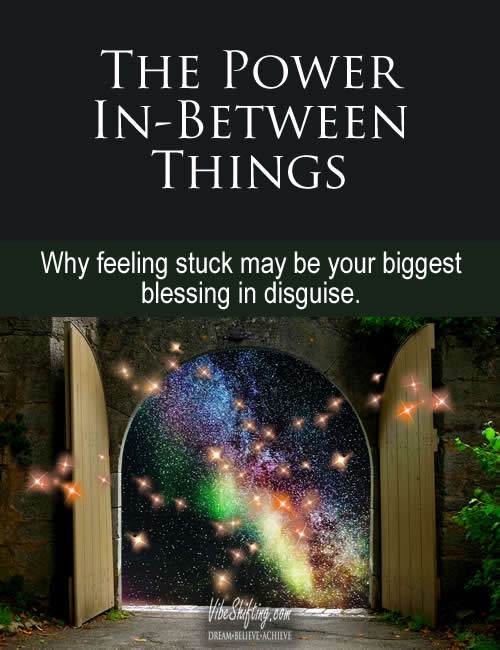 Today we are talking about the magic of change and the power in-between things.  We’re talking about learning to recognize and use the ultimate opportunities you are given for creating the life that you most want to be living. And we’re talking about how those change points can be uncomfortable and potentially scary places if you don’t understand what they really are.

Now, a couple of weeks ago we talked about that awful, awful feeling of being stuck in life and feeling like you’re never going to be able to achieve the things you want to achieve. And I gave you seven strategies for getting unstuck and back on track again. And with one of those strategies, I said that sometimes you need to change the way you think about being stuck because sometimes it’s just part of the process – that it’s a natural by-product that you get when big changes are in the works but aren’t apparent yet.

And that’s what I want to talk about today – that in-between stage where things are happening in the unseen but there’s no evidence of them yet in your physical reality. Because, hugely uncomfortable though it is, this zone is also hugely powerful. And that’s where the discomfort of feeling stuck can come from – the power that’s surging around you in the unseen realms.

One of my favourite authors is a guy by the name of Charles de Lint. He writes a lot of urban fantasy stuff where old magic crosses over into city streets and people’s lives. And one of the things he says in several of his books is that magic is found in between things.

And when you look at a lot of older, magic-infused belief systems, you see this concept reflected in a lot of their practices. Magical power is believed to be strongest at dawn and dusk, at full moons and new moons, at solstices and equinoxes, etc.

Whenever there’s a split between things, there’s power there in that split, in the boundary zone that delineates A from B.

How to change the way you think about being #stuck in life so that it becomes your greatest opportunity for making a change. #mindset Click To Tweet

The Nexus Point of Infinite Potential

Likewise, in your life, there is power in the void between the end of one thing and the beginning of another. In the space between here and there, between what was and what will be, is a nexus point of “what could be”.

It is the power of Infinite Potential, the point of pure energy on the leading edge of the unbounded quantum possibility — where this potential exists as an “anything and everything” — before it collapses into a defined “something”.

It’s a place, in other words, where real magic is possible precisely because of the unlimited possibilities that exist here. When one thing has ended and another has yet to begin — has yet to even form the concept of what will next begin — you have the unprecedented ability to decide what that possibility will be.

A Point of Chaos and Fear

Now, while this is a point of possibility and potential, the energy on the liminal edge between what was and whatever will be is also a point of chaos – of unknown and therefore potentially scary changes.

This nexus point, this void that exists in the no-longer-there but not-yet-here, can be a profoundly frightening place because it’s the ultimate expression of what humanity has always feared most: the unknown.

We’ve lost what was and don’t know what will be next. And that’s terrifying for us. It triggers the alarm bells in the most basic, primitive parts of our brains that are designed to make us react to danger before we’re even consciously aware that danger is even there.

This is why you feel so uncomfortable and so restless and so frustrated when you’re stuck. It’s because you’re right smack-dab in the middle of that void, and you’re picking up on the hugely powerful energy patterns swirling all around you, even if you can’t see them. 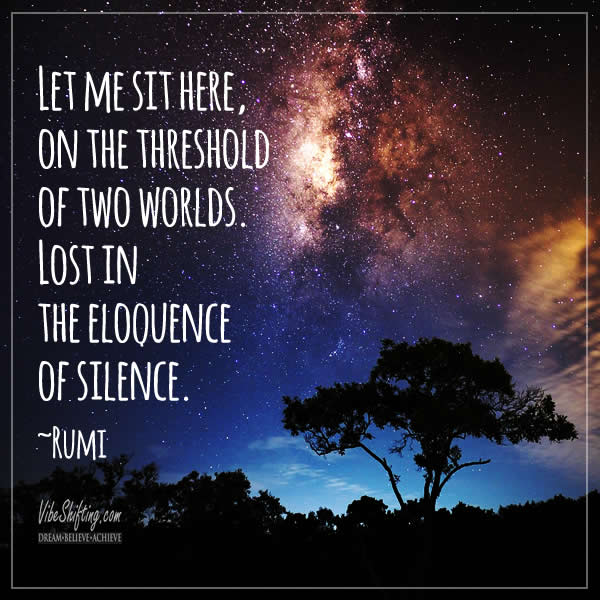 The energy at these boundary points is the energy of becoming, and it can feel completely overwhelming to many. But it is also the place where each individual can tap into the primordial energy that connects All That Is in order to create something new.

And this is so important because what it means is that this being-in-the-void problem you’re having actually becomes YOUR personal point of infinite power because it is from this place of unlimited possibility that you can most effectively begin to shape the world into the image you have of it.

To put it another way: When you’re feeling stuck, like nothing is working and your whole life is one big ball of frustration, THIS is the point at which you are at your most powerful because THIS is the point where all the unrefined power of potential – and I’m talking all the divine, cosmic, creative power of the entire freaking Universe here – is swirling around you.

Do you see the opportunity here? Can you see the possibilities you’re basically being handed on a silver platter right now?

That unsettled feeling you have? You’re sensing the energy surge of potential, of the almost-something! And it’s building and building and it’s almost ready to hit the flashpoint and become a SOMETHING. It’s about to become a change in your life. BUT IT ISN’T YET.

And THIS is the critical point. The energy of potential is building around you, but it hasn’t been turned into anything specific yet. And that means that this is one hell of a big opportunity for you because if you can harness that energy, you can direct it into a form of your choosing. Or at least turn it into a form that would be helpful to you.

That very feeling of stuckness that you’re so unhappy about could be a huge blessing in disguise if you change the way you look at it. Look at it as an opportunity rather than a burden and jump on this chance to start playing with your power to create something really cool.

How to harness the magic and power of infinite #possibility between the end of one thing and the beginning of another. #potential Click To Tweet

The trick, though, is to figure out how to harness this potential energy without being overwhelmed by it. Because there is one thing I do want to caution you about here and that is the fact that when anything is possible, everything is possible.

And this means that, despite the unprecedented opportunities inherent in it, the void can also be a bit tricky to navigate because when there are so many possibilities for creation open to us, we sometimes fail to choose anything out of fear of choosing the wrong thing.

And when that happens, you inadvertently end up creating something that is based on your fears and frustrations rather than your desires and dreams.

Harnessing the Energy of Creation

My best suggestion for avoiding this pitfall and, instead, deliberately harnessing the energy of creation, is to immerse yourself in the energy of your ideal solution.

In other words, when you’re feeling stuck, this is probably the best time for you to use all those manifesting tools you already know but never remember to use: create a new vision board, visualize the ideal solution to your current problem, or journal the next chapter of your life and write it out exactly as you wish it would unfold for you.

Really get yourself into the details and the emotions of your ideal story or experience because this is what’s going to help you wield the power that’s flowing around you and channel it into something you actually want rather than letting your feelings of frustration dictate how things are going to unfold.

So, what I want you to take away from today’s show is that when you’re feeling stuck, what’s really happening is that you’re feeling the power in-between what was and what will be. You’re on the threshold of a new beginning, and all that creative energy — the magic of the entire universe, essentially — is what’s causing your discomfort.

But if you can harness that magic, that power of potential that lies in-between any two things, then you can use your current stuckness not as a mere stepping-stone, but as rocket-powered spring-board to launch you towards your biggest dreams.