1801 Making Mistakes and Dealing With Regrets 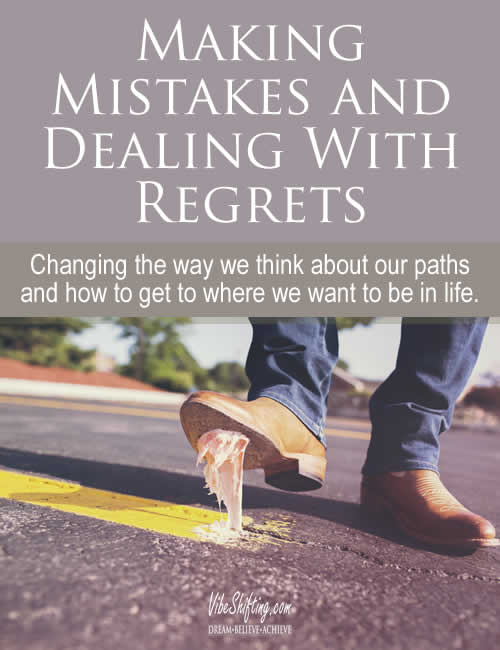 Hello everyone and welcome back to a brand-new season of The Vibe Shifting Show! Today we’re talking about making mistakes, dealing with regrets, and taking action to build our dreams.

So, here we stand on the brink of a brand-new year. A fresh start and a wealth of possibilities lie before us. But for many, the concept of all those possibilities can conjure up a wealth of panic, too. How do you decide which path to take? What if you’re not sure which is the best direction or the best road for you? What happens if you start making mistakes, get everything all wrong, and find out twelve months from now that you’ve wasted a whole year on a wild goose chase? Oh, the stress of it all!

Now, before you give in to full-fledged panic, relax a little! And take some of that pressure off yourself. Because this is not a do-or-die scenario. So often we start off a new year with all sorts of regret about everything we didn’t manage to get done in the previous year, despite all our best intentions.

When it comes to building your dreams, are you stuck in this vicious circle of frantic action and desperate floundering? Maybe it’s time to #ThinkDifferently! Click To Tweet

So what we end up doing is launching ourselves into January all gung-ho and determined that this year we’ll “make things happen” and this year, we’ll finally get things right. Then we dive headfirst into all sorts of programs and make all sorts of resolutions, and it’s all high-energy and frantic action… for all of about three weeks before reality kicks in and we find ourselves floundering again.

It gets to be a bit of an annual vicious circle, doesn’t it?

A Different Way to Start Your Year

What if this year we decide to give ourselves permission to enjoy the process of our lives as the journeys they were always going to be and always meant to be?

What if we all just took a deep breath and accepted that whatever paths we do end up taking will end being the right ones for us, eventually. Because sometimes we take a direct route to what we want in life, and other times… well, let’s just say that the route tends to be more meandering and scenic.

What if we began to understand that those longer routes aren’t necessarily “bad” or “wrong” for us, and that whether we go the direct route or the scenic route, we’ll get to where we want to be as long as we keep going and don’t give up?

And what if we realized that, in order to do the things we need to do in order to build our dreams and create the lives we want for ourselves and the people we care about, we need to be willing to make a few – more than a few! – mistakes along the way? 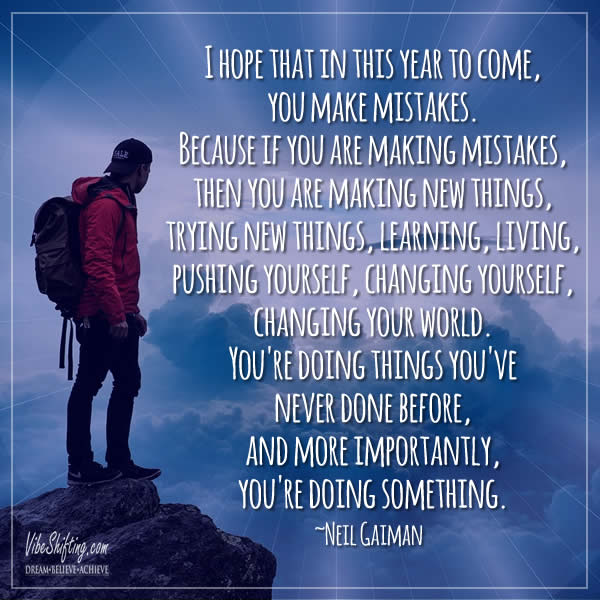 The inescapable fact of the matter is that living any life is a process of trial and error, and you’re going to mess things up once in a while as you go. We all do. But that’s how we learn. Mistakes are fixable. And, more often than not, it’s those very mistakes of ours that end up leading us to our biggest breakthroughs or greatest accomplishments.

But those things all come in the doing of things, not in the sitting around and waiting for something to happen. Yes, that purple car you’re trying to manifest into your life as a “just for fun” experiment might show up as a picture on your screen while you’re sitting on your duff scrolling through Facebook, but it’s probably not going to show up in your driveway that way.

You get the picture.

Put Wonderful Things Into The World

Some of the things you create aren’t going to work out quite right.

Some of them will flop in spectacularly embarrassing fashion

Some of them you’ll wish you had never created in the first place.

But some of them will become seeds for greater things.

And some of them will actually be brilliant right from the start.

You’ll never know, though, unless you create them. Unless you stop wishing for them and start working your magic to pull them into your physical reality. Unless you take a risk on pouring a little bit of your heart and soul into something that matters to you in the hopes that it will grow into something amazing.

Making Mistakes Is Part of the Process

Mistakes, in other words, are part of the process of creating anything new.

Whether you’re trying to launch a new business, learn a new skill, or make some new friends when you’re used to an introvert lifestyle, you’re going to mess up once in a while. And when you do, the important thing to remember is that that’s OK, because you’re supposed to! The only time you don’t make mistakes is when you’re stagnating in place and never trying anything new!

If you’re making #mistakes, that’s a good thing! It’s part of the #process of creating anything new! Click To Tweet

If You’re Regretting Past Mistakes

Now, if you find your path has taken a detour because of some of your mistakes – if you’re looking at your life to date thinking that every decision you’ve ever made in life was the wrong one because, right now your life doesn’t look anything like what you’d thought or hoped it would be – then that’s OK, too. You’re allowed to feel whatever it is that you feel about that.

And if you’re in that boat, then one of things that I would suggest is that you take some time to sit down with a pen and paper and write out anything good that has come into your life through those “bad” decisions.

In my case, for example, whenever I start worrying about money and question my decision to leave a job that would most likely have led to a six-figure salary for me today if I had stayed, I also remind myself that if I had stayed I would not today have my two children. And I probably would never have launched my blog or written any of my published books, either.

Another thing to remember is that it’s easy to look back from where we are now, with the benefit of hindsight, and think that we should have made different decisions. But at the time we made them, we made the best decisions we could make for ourselves given who we were, and what resources and knowledge we had available to us, at the time.

When we allow ourselves to get sucked into regret it does nothing to help anyone, least of all ourselves. What we can do, however, is chart a new course for ourselves from where we are now. As Mike Dooley like to say, we can always recalculate our route if we’re moving, but it’s hard to get anywhere at all if we stay parked in the driveway.

Make As Many Mistakes As You Can

So start your new year the right way. Think about what you want to accomplish, and make a pact with yourself to make as many mistakes as you can while you go out there and start building that dream. When you start to question yourself or regret your old decisions, remind yourself that’s it’s all part of the journey, and re-focus yourself on doing what you can from where you are today.