Shifting Your Mood with Mindfulness and Gratitude 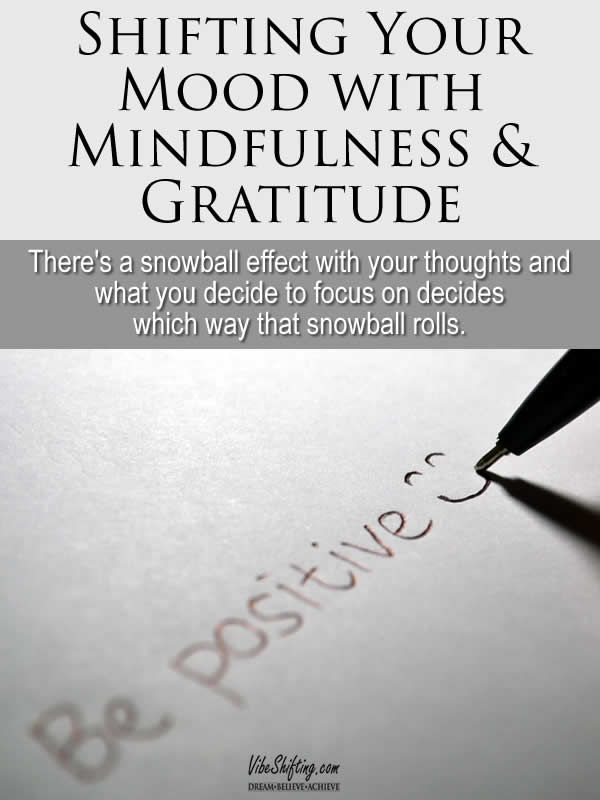 One of the best ways to make a big, lasting shift in your mood and outlook on life is to make a lot of little shifts in the way you approach each day. Shifting your perspective on the events that unfold within your daily life is one of the biggest keys to creating an energy within yourself that is better aligned with making those big dreams of yours happen. And the easiest way to achieve this mindshift is to inject a little mindfulness and gratitude into your day.

Yup. We make it out to be such a difficult thing, but practicing mindfulness and gratitude is really very easy. The hardest part is just remembering to do it, that’s all.

For example: on Monday, I had to go to a dental appointment that was on the outskirts of the downtown core of the city I live in (I live in the suburbs). I would normally drive there, as it’s a bit of pain to get to by bus (takes a couple of buses to get there). But I share a car with someone and he needed the car that day for a golf game. (I know. Priorities, right? He did offer to give me a ride to the appointment, but I was going to be on my own getting home again, plus I was going to have to walk the kids home from school in the rain that night.)

Anyhow. I woke up on Monday morning after having slept horribly (I’m the Insomnia Queen, in case I’ve never mentioned that fact before). It was pouring rain out when my alarm woke me up, and I only had time for one cup of coffee that morning (usually I need two, and after a mostly sleepless night, I definitely needed that second cup that I didn’t get!) So I was not a happy camper on my way to the dentist’s office.

After the appointment, I was really feeling the fatigue and lack of caffeine, and the first bus I needed to catch was late. And it was raining. And the wind blew my umbrella inside out, so I gave up on it, threw into my purse soaking wet. And stood glowering in the rain thinking evil thoughts about the evil public transit system, getting grumpier by the minute.

And that’s when I happened to glance down at the sidewalk. And there, right in front of me was a dime. And it made me smile. Because it made me think of my kids – especially my son. He gets so excited when he sees money (or even just shiny bottle caps) on the road – it’s like he’s discovered some fantastic treasure and it’s so adorable. So when I see coins on the street, I always pick them up and think about my kids.

So that made me smile (in the rain), and I was in a much better mood when the bus showed up. I wasn’t sure where my next stop was, so I asked the driver and he was very helpful, and I wished him a cheery “Have a great afternoon!” when I stepped off the bus.

And there, right in front of me was a Starbucks (Hallelujah! Coffee at last!). I walked into the coffee shop just ahead of a crowd of people, and there was no one else at the counter so I didn’t have to wait in line at all. Had a nice chat with the barrista (barristo?) while he was making my coffee, and we both agreed that it was a shame that they never have the Kenya coffee available as the brewed coffee because it’s by far the best one they have.

When my next bus came, I was grateful that I got a seat (a window seat, no less!) and didn’t have to stand all the way out to the suburbs. And I was grateful to be able to just sit and enjoy the scenery without having to worry about the traffic or having to drive.

And by the time I got back home, I was actually in a really good mood, which was pretty impressive considering the way the day had started.

The power of mindfulness and gratitude

But do you see how easy it is to make that shift in your mood? How focusing on something as small as a coin on a sidewalk, and being grateful for it can pull you out of a negative headspace? There’s a snowball effect with our thoughts sometimes… and that snowball can roll either way; it can make a bad mood worse, or it can make a good mood even stronger. You just have to decide which side of the hill you’re going to send it rolling down.

P.S. The video in this post is from my very first ever livestream broadcast. I’ll be doing more of these at random in the future, and if you want to catch them live, you can follow me on Periscope to get notified when a broadcast starts. They’re live, totally unscripted and off-the-cuff, and they’re interactive, so you’ll be able to ask me questions and interact with me live. You can also heart broadcasts you like by tapping your screen, and you can even share them with your own followers or send them out on Twitter if you feel like it. You can get the Periscope app for iOS or Android, and my handle is @VibeShifting or Vibe Shifting (use the search to find me).

P.P.S. Have you ever had this kind of perspective-altering experience that shifted what could have been a bad day over into a good one? Tell me about it in the comments below — I’d love to hear your thoughts! 🙂