Why You Need to Rest, Recuperate, and Realign 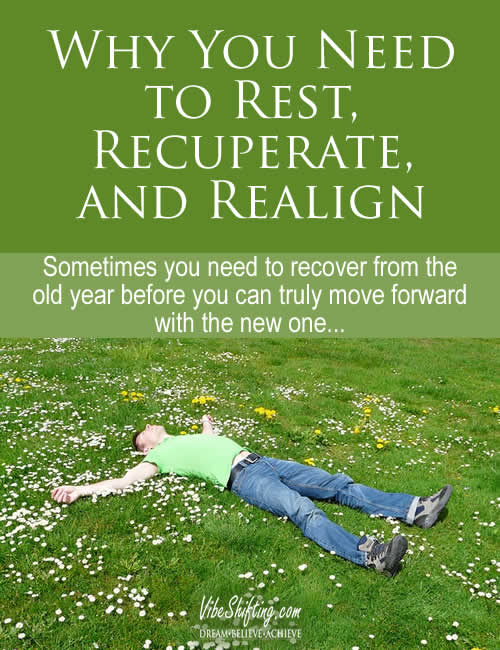 So, I’m starting a new thing here on Vibe Shifting. I think I’ll call it #MantraMinded. Every week I’ll be posting an article focused on one specific word or quote – something that has resonated with me over the prior week and made me stop and think. I’ll share my thoughts on it, and I invite you to use the mantra as a meditation or focus point during the week to help you in your own journey, as well.

If you’re overwhelmed and exhausted

If you’re feeling battered and bruised by the chaos and unexpected traumas of the past year, you’re not alone. In talking to other light worker types recently and what they’re seeing with their readers, it’s clear that so many of us are approaching these final days of 2016 with feelings of exhaustion and resignation rather than the hope and optimism that normally characterize the start of a New Year.

Feeling drained and resigned? Time to #rest and recuperate before stepping into the new. #MantraMinded Click To Tweet

In many ways, it’s been one hell of a year. And that can take a toll. And it’s only natural that as the year draws to close and we start looking back on all the events of the past twelve month, we start to feel overwhelmed by it all. Maybe we didn’t notice it before because we were in the “keep on keepin’ on” mode and just felt the need to get through it all.

In such times – when we’re feeling drained and hopeless – the best thing to do is stop fighting it. There comes a point when we realize that fighting the overwhelm just adds to its power.

Because that’s the first step in finding your way through it.

Allow yourself to rest and recuperate

So be gentle with yourself right now, and allow yourself the respite that you need. Letting yourself rest and recuperate gives you the time you need to heal your psychic wounds, replenish your energy reserves, and realign yourself with Who You Really Are.

Don’t force yourself into feelings or activities you’re just not ready for right now. If you need to withdraw from your usual social scene, then do so without guilt or apology. 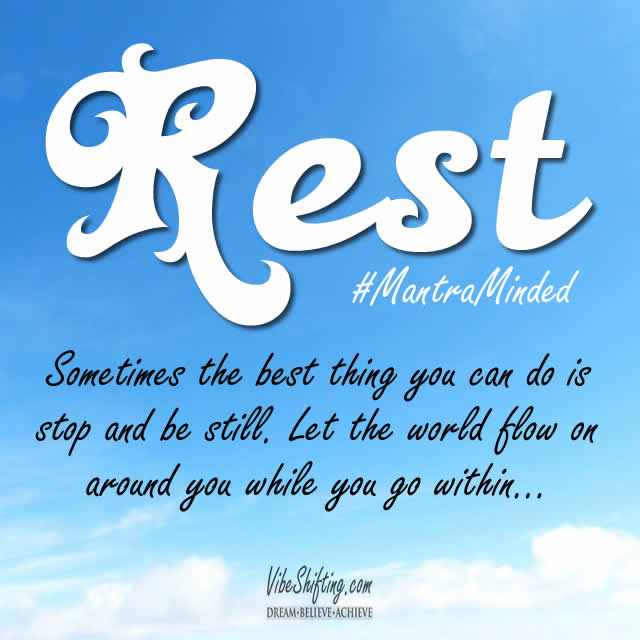 You can’t give what you don’t have

It’s not a crime to look after yourself – it’s a necessity. Remember that you can only give what you already have. When you’re drained, you’re no use to anyone else anyways. Do what you need to do to return to yourself and “refill” your energy reserves.

Sleep whenever you can and allow your mind and body to regenerate so that you are able to let this year go and step fully into the next when it arrives.

Feeling stressed? Sometimes the best thing you can do is stop & be still. #rest #MantraMinded Click To Tweet

Rest is not a bad thing. And admitting it to yourself when you need it is the wisest thing you can do. Set your boundaries – don’t let others override your own needs in this matter and give yourself whatever time you need.

You can only go for so long

When our minds and bodies call out for rest, we can only ignore it and force ourselves to keep going for so long before are made to take the rest we need. And that kind of crash usually comes in the form of illness or other breakdown. And that, in turn, puts us out of commission for far longer than we would otherwise have been, had we just heeded that little whisper within us in the first place.

So use these last few days of the year to take a step back from the hustle and bustle. Don’t try to plan out your new year or worry about the old one right now. Don’t try to make any critical decisions. And don’t push yourself further than you absolutely have to.

Instead, just stop. Stop and be still. Let the world move on around you while you go within.

The time for action will come again soon. But for now, take this time for yourself. Let it all go and just rest…

P.S. If you love the idea of weekly mantras, you’ll probably love my spiffy new Mystical Mantras grown-up colouring book, too. It’s got lots of mantras that you can ponder as you colour away your stress…