Why Failure is a Good Thing 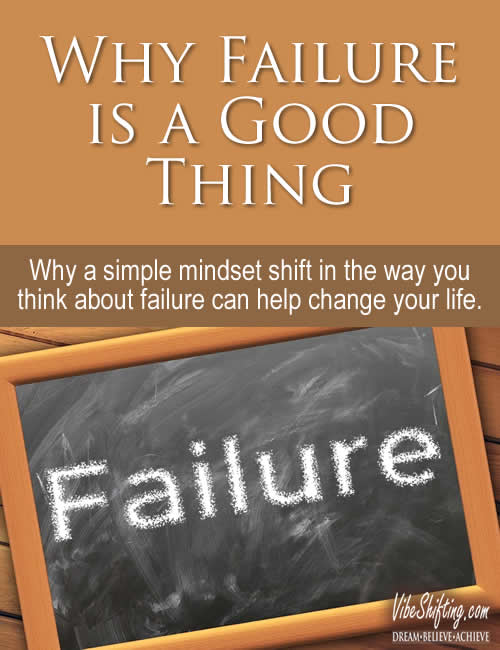 Have you ever had a big dream or a goal – something that you were really super-excited about, and every time you thought about it, it just fired you up and made you feel like anything was possible?

You see, for a lot of people, the fear that we might fail at something that is really important to us is enough to prevent us from ever even starting. We’re so afraid that it won’t work, that we don’t even try to make it work. We doom ourselves – and our biggest dreams – before we’ve even begun.

Now, why is this? Why are we so afraid of failure? Why do we think that failure is such a bad thing?

Obviously, failure can hurt. It bruises the ego a whole awful lot and this can make a lot of people want to shut down their dreams to avoid risking further pain.

Failure is a good thing (really)!

But I think what we really need to do is wrap our heads around a whole new way of looking at failure. What would happen, for example, if you tried to shift your perspective a little? What if, instead of viewing failure as a big calamity, you started to think of it as just another part of the plan?

Because the reality is that failure is NOT a bad thing; it can help us to improve on an original idea; it can help us to realize that we need to head in a different direction; it can even act as a magical force that allows us to realize previously unknown reserves of strength and determination that steel us to do whatever we need to in order to succeed. There are a lot of really good things that we can gain through our failures.

With this view, failure is actually seen as a good thing because it means you’re out there doing something! Think about it for a moment: the only people who never fail are those who never even make the attempt to do anything with their lives!

Success is a process (that includes failure)

We need to start thinking of failure as a normal part of the process that is success. What if, for example, multiple failures are actually stepping stones to that big dream that we’re after? What if it’s getting through those failures that provides us with the building blocks that we need to create our path to success?

I read a book to my kids recently, it was called “The Most Magnificent Thing” by Ashley Spires, and it’s a kids’ book, but I think the message in this book is one that all of us need to take to heart. In the book, this little girl decides she’s going to make the most magnificent thing, and she works so hard at it. And she just can’t get it right. Over and over and over again, she tries and she fails. And she gets more and more frustrated and angry with herself, until she finally gives up in tears.

But then she looks at her long string of failures, and she realizes that in each of those failures, there’s something she can use. And she takes all those little bits of good things from all her failures and she uses them to create her most magnificent thing. It’s a little different than she had expected, but she realizes it’s exactly what she wanted.

Never give up on something you want with all your heart just because you failed the first time or the first dozen times you tried. We learn through experience, and every time we fail at something, it’s an opportunity to create an even better version of the original dream.

Allowing yourself to fail

Also remember that if you never try anything new, you’ll never do anything new, either. It takes a certain amount of risk and a certain amount of fear to build the extraordinary; big dreams never get built in people’s comfort zones, and if you want to achieve great things in your life, you have to realize that you’re not going to be great at it right out of the gate. No one is. You learn by doing, as you go along, and as you make mistakes and fail.

Give yourself that gift. Allow yourself to try new things, and be prepared to embrace your inevitable failures. Celebrate them, even. Because they mean that you are on your way to creating your own magnificent thing – they’re a measure of your willingness to do what it takes to build your biggest dreams.

And if you’re willing to learn from them, your failures will only serve to help you on your quest to create a life that really means something to you. Failure is a good thing. Shift your perspective on this one, and it will change your life.