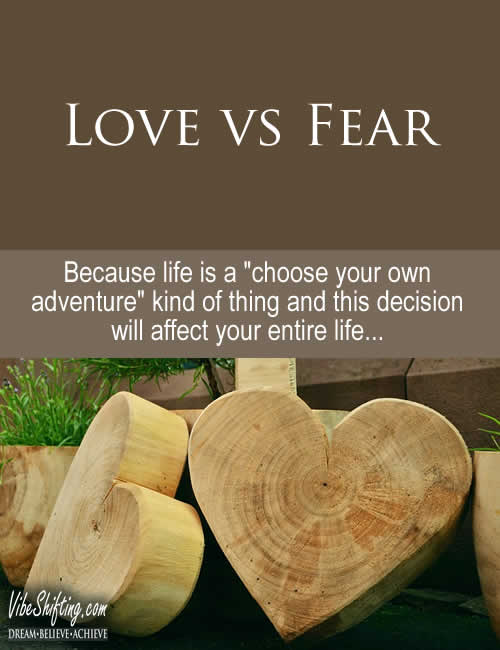 Last week we talked about how the realization that your mind, is a powerful force shaping your reality can be really scary for some people. When you realize that your thoughts, beliefs, and expectations have such an enormous impact on how you perceive the world around you and on how you experience your world – for some people it can be paralyzingly frightening. But it comes down to a choice between love vs fear.

The thing is, that very fear of your own power, is affecting your ability to change the way you create that world of yours. If you see the power of your own mind as something to punish you for not being strong enough to control them, and if your fears about your own abilities are running rampant through your mind, it’s not a wonder that the situations you create in your physical world would be less than ideal.

The fear itself acts as that filtering lens we talked about, that filter that makes it impossible for you to even be aware of anything in your reality that doesn’t match that fear. Essentially, being afraid of your power to change your own life just serves to keep you stuck where you are, and it can even make things worse, because when you’re focused on fear and negativity that is what the dominant flavour of your experiences in life will involve.

Love vs Fear: Embracing Your Power

Think about the character of Queen Elsa, from the movie Frozen. She spent a lifetime being terrified of her own power. She hid herself away in her room for years and refused to have anything to do with the outside world. She was so afraid of hurting anyone. But the more afraid she became of her power, the more out-of-control it became; she was so focused on fear that all she could create were more situations that caused fear.

Is love or fear the dominant creative power in your life? Here's why it matters... Click To Tweet

That’s really important – by focusing on her fear, the only thing she could create for herself were more situations that caused fear. Your external reality tends to be a mirror of your inner reality, remember.

In order to change her outer reality, Elsa had to change her inner beliefs and expectations about what the world was like, and that didn’t happen until she realized that love was the answer. Once she chose love instead of fear, she realized just how easy it was to control her power and use it to build positive experiences. She realized how much fun it could be, how much beauty she could create with it, and how much joy that power could bring, not only to herself, but to all the people of her kingdom.

When you strip away all the window dressing, all the fluff, and all the things that you think are “complications”, every single choice in your life comes down to that choice between love vs fear. It’s a deliberate choice, and one that will have a profound impact on your life from here on in.

You can choose to live in love and focus on the beautiful vision that you see inside of you, allowing that to be the dominant creative power in your life, or you can choose to let fear take the lead. It really is up to you.