1509 How to Let Go and Trust the Process 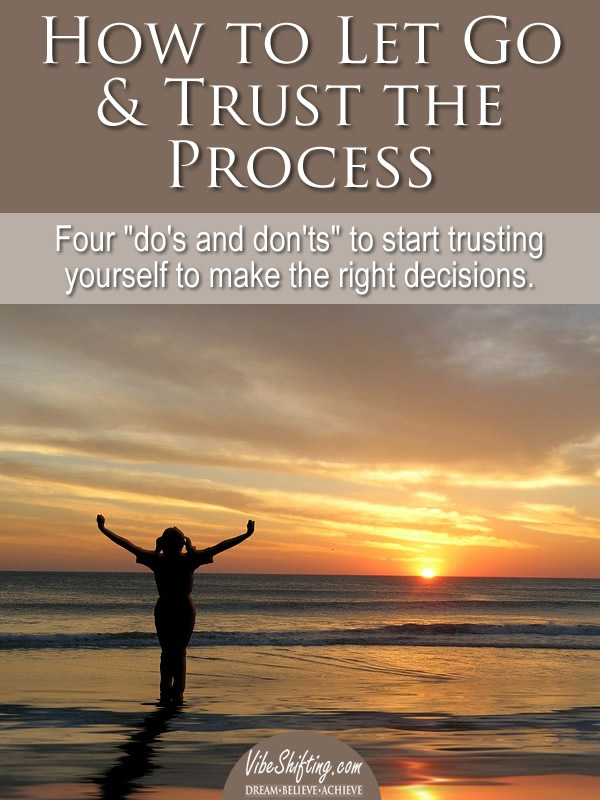 Today we’re talking about how to let go and trust the process. As human beings, we have a tendency to want to control every little detail about the things we’re trying to manifest in our lives; we want to know exactly what’s going to happen and when, at every step of the journey. When we’re faced with big decisions, the tension and stress that we feel over not knowing which way to go and how it’s going to turn out can be magnified exponentially.

Learning to trust the process, and letting it work for us, is critical to success in creating the kind of outcomes we want in life. But how do we just let go and start trusting that things are going to work out the way we want them to? When big decisions loom, how can we trust ourselves to make the right ones?

Well, there are a few “dos and don’ts” to keep in mind that can help with letting go…

Here’s something to think about: no matter how bad things have looked for you in the past, you’ve managed to get through it. You have survived absolutely everything so far – your track record currently stands at 100%. Not too shabby. And the odds are good that no matter what happens – no matter what decisions you make or what path you choose to follow at this particular juncture in your life – your track record will most likely remain the same. No matter what happens, you are highly likely to survive it. So what’s the panic?

I always like to remember Mike Dooley’s concept that we all have a cosmic GPS system built into us that is always tied into the Universe itself. No matter where we go, or how many “wrong turns” we take in life, the Universe is ALWAYS capable of recalculating a new path to the destination we want. No matter where we are or where we have ended up in life, it is ALWAYS possible to get to where we want to be. In this view, making the wrong decision is nowhere near as big a deal as we often think it is. Made a decision and it didn’t work out well? No worries – just refocus on the destination you want and the Universal GPS System will find an alternate route to get you there!

Do focus on the process.

And the really important thing to remember about paths is that they only come into existence as you are walking them. While you may be desperate for the reassurance that would come from knowing what your whole journey is going to look like before you take your first step that is never going to happen. You will never be able to see your whole path laid out before you because you haven’t created it yet. The only way to create that path is to start walking.

And even if, while you’re walking, it may feel like you’ve taken a wrong turn somewhere, keep the faith that one day you will look back on this part of your journey and see how perfectly it fit in and made sense as part of the greater experience of your life. No matter which fork in the road you choose to take, this decision that you’re struggling so much with right now cannot be the wrong decision, because it will be integrated into larger tapestry of your life process, along with everything else you have experienced.

This is something I talk about in my upcoming book about fear, actually, and oh, boy is this a biggie. And we’re all guilty of it. When we’re stressed out and don’t know what to do, and we’re scared about making the wrong decision… what’s the first thing we all do? We start the opinion polls. We ask everyone around us what they think. And everyone, of course, is happy to give us their two cents. But then what happens? Nine times out of ten, you end up even more stressed out and unhappy than you were before you started your opinion poll!

What often happens is that you end up offended by the implied or explicit view that you’re doing the wrong thing; that you shouldn’t even be considering this; that only a foolish person wouldn’t take the other party’s well-intended advice. If this is the case, then odds are that you already know what it is that you want to do or which decision you want to make. You’re just looking for someone to back you up and tell you that you’re not crazy… and when they don’t, your feelings are hurt and you’re resentful.

What can also happen is that you get conflicting opinions from different people and you end up even more confused than you were before. In either scenario, asking other people for their opinions hasn’t helped you make your decision… it’s just made the whole thing harder for you, so why go there in the first place? The key thing to keep in mind here is that you are the only person who knows what’s best for you.

This is not to say that you should never talk to someone else before making a decision – not at all – sometimes bouncing ideas off someone before taking action on something is really beneficial. But you need to know what you’re looking for when you start asking for those opinions. If you’re really unsure about something, for example, say you’re considering signing up for a really expensive course that you think might help you with some aspect of your life, but you’re not sure if you want to spend that much. Instead of asking people what they think, don’t mention the course at all; instead, ask people if they have any recommendations or suggestions about where you could find information about topic X. There’s no outside judgement in that, and you might end up with a bunch of alternatives that you hadn’t considered that could make your decision easier! But don’t ask for people’s opinions on whether you should do something or not. That never works out well.

There’s a saying out there that you should meditate for twenty minutes every day unless you are too busy, in which case you should meditate for an hour. I don’t know if I’d go that far, but the principle is sound. When you’re completely stressed out over the need to do something, but can’t decide which course of action to take, it’s really not the best time to take action at all.

What I have learned from experience is that when we’re in that paralysis mode where we can’t figure out which way to go, but we’ve built up so  much tension with the belief that we should be doing something, the best thing to do is to do nothing. Making any kind of major decision when we’re that stressed never works out in our best interests – it is absolutely the wrong kind of energy to be putting out there while trying to make important choices.

Imagine yourself standing in a pond or a stream, and imagine your ideas as fish darting about in the water. If you’re floundering around all over the place, all you’re going to do is churn up mud, which will cloud the water and make it impossible for you to see those fish you’re trying to catch. So the best thing to do is to stand completely still and let the mud settle, until the right answer swims over to you. Be still. Meditate. Clear your mind. And the answer will come to you on its own.

So, to sum this all up for you, if you’re struggling with a big decision and wondering how to just let go and trust the process, then keep in mind these four “do’s and don’ts”: don’t panic and remember your track record; do focus on the fact that your life is a process and in the long run, there are no bad decisions; don’t ask people for opinions on whether you should do things or not (instead, ask for specific recommendations); and finally, do nothing – if your mind is in turmoil and you really don’t know what to do, stop churning up mud. Become still and let the answers come to you.