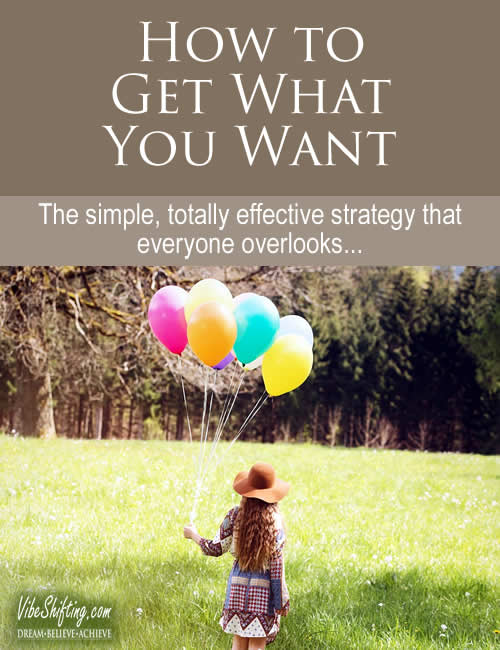 Today we are talking about how to get what you want in life. And I’m going to share with you the single biggest thing that I have learned about just how to do that. Are you ready? Because here it is – the single most effective thing that you can do to help you achieve your goals, get closer to your biggest dreams, and get what you want most in life. And that thing is simply this: ASK for it.

Huh? How could it possibly be that simple to get what you want, you’re wondering. Well sometimes it just is. We humans like to complicate things and tell ourselves that things are harder than they really are, but sometimes it’s the simple things that really are the most effective.

Letting the world in on your dream

Sometimes, we need other people to help us achieve our goals. And when other people are involved, the best thing to do is to ask them for what you want. But when you’re working towards a dream that’s really important to you and you have a big emotional investment in it, sometimes that’s a tall order

Asking for help means letting other people in on your dream. That’s why most people won’t. Click To Tweet

Asking for help means letting other people in on your dream – it means letting that fledgling concept of yours step out into the limelight where other people will see it and judge it. And that can be an absolutely terrifying thought. What if people – gasp! – don’t like it? What if they say mean things about it? What if they think it’s a stupid idea?

These are thoughts that can leave even the most enthusiastic dream-builder with heart palpitations, so most just won’t do it. The fear is just too great, which is unfortunate because the potential returns, if you muster up the strength to get through that fear, can be phenomenal.

This fear of asking people for things is one of the biggest stumbling blocks impeding our ability to build our dreams.  We know how busy people are and we don’t want to be a bother. We feel like we don’t have anything valuable to offer in return. Or we’re afraid that the other people will just flat-out say “no” to our request and reject it outright.

All of these are fears that I had to deal with while working on my book, fearLESS: How to Conquer Your Fear, Stop Playing Small, and Start Living an Extraordinary Life You Love. Part of writing a book is promoting it; whether you’re self-published or published through a traditional publishing house, it is the responsibility of the author to promote their own book (this, incidentally, is something that tends to surprise people who are newly signed with traditional publishers and didn’t do their research beforehand).

If you don’t ask, you’ll never get

So here’s my story with all of this: One of the things that helps to promote a new book is getting a bunch of people to provide testimonials for it (testimonials are those blurbs on the cover and in the first few pages where other people give their glowing reviews about the book).

If you don’t go after what you want, you’ll never have it. If you don’t ask, the answer is always no. If you don’t step forward, you’re always in the same place. ~Nora Roberts

So I knew I needed to get some testimonials for my book.  But who should I ask? Who could I ask? What are you even supposed to say to people to get them to do it, especially when you know how busy everyone is? I was asking for favours with nothing to give in return and I wasn’t comfortable with it at all.

You will get rejections (and that’s OK)

I started off by making a list of people who I would love to have review the book. People I admired. People who had audiences of their own that would benefit from my subject matter. People I thought would enjoy the book themselves. I pulled my master list together then I took a deep breath and started reaching out to them all.

Start thinking of NO as part of the process of getting to YES. #entrepreneur Click To Tweet

And yes, I did get a lot of rejections. There were a LOT of no’s. Some people were too busy, some people had other things going on in their lives, some people couldn’t because of existing contracts with other publishers.

Some people never even responded to me at all. When the first few no’s came in, I did feel bad, and I did start to doubt myself. But then two things happened: I realized that they weren’t personal; and 2) I started to build up an immunity to “no” – it just didn’t bother me anymore, and just became part of the process of getting yesses.

Getting to the yes

And I did start getting yesses, and they were pretty darned exciting! People were telling me they loved my book, and some of them were even telling me that they would be happy to help me promote it (which was even more exciting!)

Was that worth coping with a bunch of no’s? You bet. One good yes from the right person can make all the difference in the world when it comes to building a dream.

In a similar vein, I decided that I really wanted to get my book into an actual brick-and-mortar bookstore. If you Google that, you’ll learn that it’s considered pretty darned difficult to do for a self-published author, but I was determined to at least give it a go.

I personally went to different bookstores in my city and talked to the managers to ask about consignment. Did I get rejections? You bet. But I got a yes, too. And that one yes inspired me to keep going and keep asking. And then I got another yes. I got my self-published book on the shelf in two different bookstores in the first two weeks of asking. And I still have a list of other consignment managers that I plan to contact, so my yes tally isn’t even finished yet.

What helped with this round of asking for help was to shift my perspective on “no”; I decided to view my “hunt for yes” as a game. And the no’s that I got just made me smile and made even more determined to get a yes with the next ask.

So to sum this up for today, yes, it can be scary to ask people for things. We don’t want to impose. We often don’t feel like we have anything of value to give in return, especially when we’re first starting out. But just by asking for what we want, we send a specific energy out there into the Universe that helps to further our alignment with what we want.

So make it a point to do the super-scary things that currently have you stalled. Speak up, take a risk, and ask for what you want. You’ll be surprised at how many people will say “yes”.