1516 Why Competition is Irrelevant 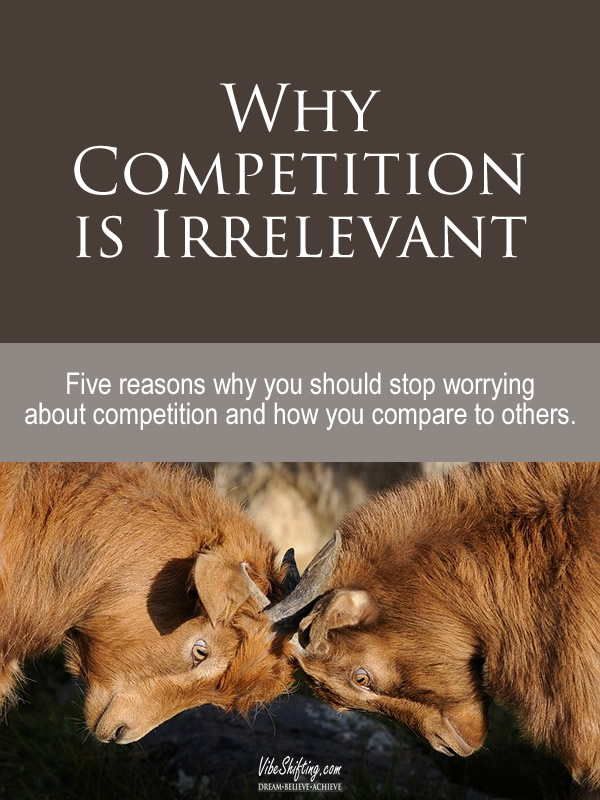 Today we are talking about competition. I’m seeing a lot in the networking groups I belong to about how tough it is out there to build a dream or get ahead when everyone else is trying to do the same thing. It seems like there are a lot of people out there expending a lot of energy fretting about what everyone else is doing and whether it’s going to impact their own ability to get to where they want to be in life. Here’s why I think competition is irrelevant and why you should stop worrying about it.

The Asians are coming

I’m going to start this off with a story. A few weeks ago, a colleague gave a speech at my Toastmasters club about the difference between academic focus in Asia and North America. His speech was called “The Asians are Coming”, and his view was that we need to force our children to study math and science and engineering and we should insist that they be pulling straight A’s, because right now they can’t possibly compete with the talent being churned out of Asian countries. He said that he was shocked when his son started high school, and the teacher wouldn’t tell him where the boy placed compared to everyone else. His view was that, unless we know how our children compare to everyone else’s children, how are we going to know whether they’ll be in the running for the “right” universities or the “right” jobs when they graduate?

He went on to say that Asian children not only go to school during the day, they are taking remedial and extended classes after hours and on weekends in order to ensure that they have the top grades in their classes. Children in these countries are apparently ranked according to how their performances compare to every other child in the class. Names and marks are posted publicly so that every child and every parent knows exactly where everyone fits in the academic pecking order. He said that if we don’t start doing this, then we need to beware because the Asian graduates, whom he felt were better educated and more disciplined, would be taking all the jobs. Now, the gentleman who was giving the speech is originally from India, so I guess he grew up with this sort of system and considers it normal.

But the biggest question in my mind as he was giving his speech was what the mental health data on all these kids living with that kind of pressure would show us. In the United States, for instance, Asian-American women aged 15-24 have the highest suicide rate of any ethnicity for that age group. And between 1996 and 2006, Asian students accounted for only 14% of the general student population at Cornell University, but almost 62% of the suicide victims over the span of those years.

The energy of competition

Let’s look at this whole issue from a different perspective: in terms of the kind of stuff that I deal with on my blog, this drive to be better than the rest of the world is just not a good kind of energy to be in alignment with. What are you focusing on when you’re worried about leaving the competition in the dust? What is it that you’re attracting to yourself when your focus is on the fear that someone else might do something better than you? Or the fear that you’re not living up to expectations and not doing well enough in your endeavours? This is all negative focus. All it’s going to do is bring unpleasantness to you. And you need to let all of that go.

As always, what we focus on is what expands. In other words, if all our energy is centred on fear of failure; fear of not being good enough; fear of not living up to standards; fear of not achieving — all this does is bring more fear into our lives; it attracts situations to us that make us feel more of those things that we are afraid of. So we end up on this downward spiral of feeling like we don’t measure up and that we’re never doing well enough to achieve what we want to or what’s expected of us.

5 reasons why competition is irrelevant

1. Competition is a sign that there is a demand.

Competition is a good thing! If there is no competition for what it is that you want to do, odds are that there isn’t a big market out there for it. Play the numbers. You could be the only person in the world who can train dogs to whistle and tap-dance, but if you signed up every single one of the, say, ten people in the entire world who might want to hire you to do that, then you’re still going to find yourself in a bind.

On the other hand, there may be tens of thousands of people providing business coaching out there but if there are, say, 100 000 000 people around the world who are desperate for business coaches, then even if you get only one quarter of one percent of those people as your clients, that’s 250 000 clients.  Competition isn’t a bad thing – it’s a sign that there’s a healthy market for what you want to do.

Someone in one of my networking groups made a comment quite a while back, sharing her misgivings about starting a blog for her makeup business. On the one hand, she wanted to write the blog, but on the other hand, she felt that it would be a waste of time and would just get lost in the overwhelming numbers of beauty blogs already on the internet. “Does the world really need yet another beauty blog?” she wondered.

My answer to her was this: “You’re absolutely right. The world definitely does not need yet another beauty blog. What it needs is YOUR beauty blog. Your unique perspective, personality, and way of doing things.” And that’s the key – it doesn’t matter how many other people are out there doing what you do; if you stay true to who you are, not one of them will do it the same way that you will. It’s your own unique way of approaching things that will make what you do stand out from everyone else out there who is also doing it.

This one is similar to the last point. You need to stop worrying about competitors because if your focus is always on how other people are doing what you want to do, you will fail to develop your own unique signature and style – and it’s this personal stamp that really is what sets you apart from all the rest. What makes you the right person for one client may make you the wrong choice for another client. But it is your differences that make you appealing to your ideal clients.

So figure out what makes you different from your competitors and push that. If everyone else doing what you want to do is a “Type A” personality who really rides people, but you’ve got a more gentle personality and prefer to lead people to what they need to do rather than push them there, then use that. Not everyone wants to work with a drill sergeant, so use your unique strengths to attract the people who would be a good match for your particular strengths and ways of doing things.

4. Competition should only ever be with yourself.

Instead of worrying about what everyone else is doing, focus on doing what you do to the best of your abilities. Pour your energy into increasing your own skills in the areas that you thrive in and using that to improve your ability to help your clients, rather than on panicking over the fact that your competitors are doing something different and worrying whether you should be doing it too just because they are. Just let all that go and focus on continuously being a little bit better at what you do than you were the day before.

When you’re trying to build a dream for yourself, focusing on how others are doing isn’t going to help you to improve your own skills or odds of being successful.  You need to bring your awareness inward and dedicate yourself to being the best that YOU can be, regardless of anyone else around you.

5. Your desired outcome is the focus.

Bring yourself back to your dream, goal or vision: What is that you want to achieve? Instead of wasting your energy worrying about everyone else in the field and whether they’re going to do better than you, remember why you want to do what you do. What’s your touchstone; your reason for wanting to achieve this goal in the first place? At the end of the day, how do you want to feel about what you’ve done that day? How do you want the people you’ve worked with to feel? These are the things that should be your focus, rather than your fears about not measuring up to some arbitrary and impossible set of outside standards.

There will always be people who are better at what you want to do than you are. Likewise, there will always be people who are worse at it, too.  If you get caught up in competing with others, you will either always  be feeling as if you’re not good enough, or you’re going to get a swelled head. Your worth as a person is not and should not be dependent on how you compare to anyone else around you. So bring your focus back to what you want to see happen in your life, and stop worrying about everyone else. There are only so many hours in a day. You can use them to fret about competition or you can realize that competition is irrelevant and use those hours to understand yourself and your clients better and work towards building something that really matters to you.