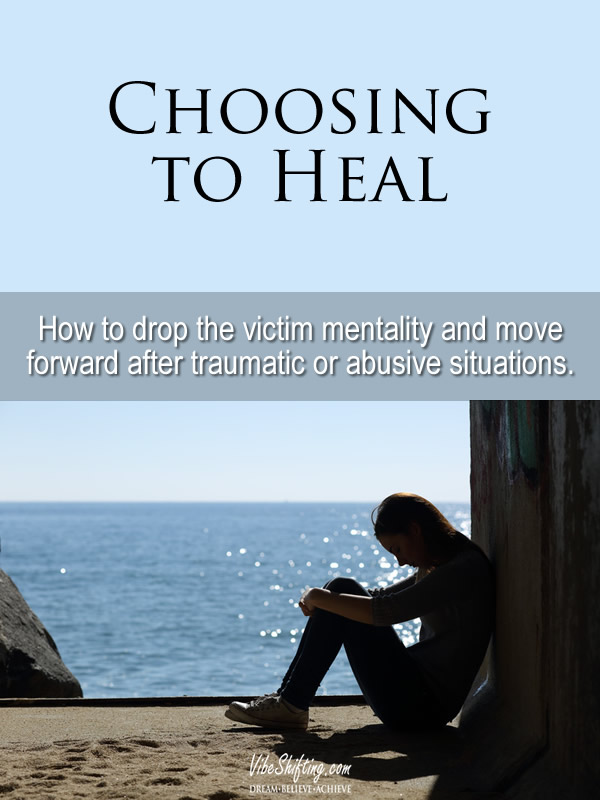 Choosing to heal from a traumatic situation is a choice between moving forward and staying forever trapped in the darkness. It’s a choice to live your life on your own terms, rather than letting the past continue to dictate the course of your days.

This is probably the most raw and personal post I have ever written, and it took an awful lot to decide to actually publish it. If you’ve suffered trauma in your own life and you still find others’ stories triggering, or if you’re just not ready to drop your addiction to a victim mentality, then please skip this one.

Why I wrote this article

I wrote an article quite a while back in response to a reader’s question about bullying and the Law of Attraction. The reader had actually sent in the question several weeks before I wrote the response, which was unusual because back then the volume was low enough that I was pretty quick to respond to reader questions. That article, however, was different; it was really, really hard for me to write because it actually brought up a lot of stuff from my own life; demons that I thought I had dealt with and put to rest a long time ago. But they came back with a vengeance when I started trying to put a response together for the reader’s bullying question.

I ended up writing two articles, in fact. The one specifically about bullying that actually got published… and this one. I actually wrote today’s article over a year ago, but I couldn’t bring myself to publish it then; I just wasn’t ready. And then last week, I had a conversation with someone that made me realize that maybe there are people out there who need to hear it. So today’s the day. This is a post about choosing to heal after surviving abuse. In my case, it was child abuse, and it happened a long time ago…

A childhood of trauma

I was seven years old when my mother was killed in a terrible car crash that also left my father in the hospital for over a month. I was eleven years old when the house I had grown up in was gutted by a fire and my cat, who was my best friend in the whole world, was killed in it. Almost immediately thereafter, I was plunged into yet another traumatic situation that I could not control, and could not escape from, and it was a situation that I would be trapped in for the next seven years.

What started off as rampant psychological torment soon progressed into physical assault. My world was shattered, twice in very short order, and there was not a damn thing I could do about it; I was only a child, after all.  And I was smart enough to know that if I ran away at my age I’d likely end up on the street, hooking to survive; where I lived, no one could legally hire a child under the age of sixteen for any kind of real job. So I stayed where I was, becoming more and more damaged as the abuse continued, day after day after day.

Out of suffering have emerged the strongest souls; the most massive characters are seared with scars. ~Khalil Gibran

To be clear — I wasn’t getting beaten to a pulp, and I never suffered any broken bones myself, although my assailant did break a wrist in an attack on me. (To this day, I still have no idea how that happened as I was significantly underweight at the time and the other person was a lot bigger than me.) My physical injuries, fortunately, were limited to scratches and bruises. I think that was part of the reason it took me so long to understand what was going on. Because I was well aware of how bad child abuse could be and because I knew what other people were going through, it took a long time for me to accept and understand that what was happening to me was also, in fact, abuse.

In any case, there was no one I felt I could turn to for help. And all of my pain and anger and fear and desperation turned inward. I started dieting because the food I ate was the only thing I could control, and I became very, very good at it; I was soon diagnosed with anorexia and almost landed myself in hospital because of it. I was thirteen years old the first time I can remember wanting to kill myself, and I was officially diagnosed with clinical depression at eighteen, something that I still struggle with today. Child abuse is devastating to those who are victims of it, and the emotional scars can last a long, long time.

Survival and choosing to heal

But you know what? I survived. I got through it; broken, maybe, but still alive and still stubbornly clinging to hope. It’s taken me a long time to deal with what I went through – and I’m not going to lie to you, there are things that I am still trying to understand and get over today, twenty years after getting out of that abusive situation. But every day I make a choice to look for the positive and to focus on the kind of life I want to build. I know that getting up every morning just to relive the past isn’t going to help me or anybody else.  So I don’t do it.

The most authentic thing about us is our capacity to create, to overcome, to endure, to transform, to love and to be greater than our suffering. ~Ben Okri

This is why it bugs me when people get all huffy about the idea of choosing to heal, or of choosing to be happy after having suffered from trauma. Because these things are choices, whether you want to believe it or not. No, you did not have a choice when you were a child. And no one chooses to be abused. Ever.  But once you are out of your situation, once you become an adult and are able to make your own decisions, then you most definitely do have choice about how you’re going to live your life. You can crawl into a shell and relive every trauma you’ve ever experienced over and over again until you can’t see or feel anything else, and you can spend your days blaming your abuser and everyone who did nothing to help you out of the situation for creating your crappy life.

Let go of the victim mentality

If you want to stop being a victim, then you need to make better choices. Don’t like the bitter pill you’ve been chewing on all these years? Then spit it out and try something sweeter. Tough love, people. If you want to create a better future for yourself, then you have to stop making excuses for yourself based on crap that happened in the past.  Yes, it sucks big time that any of us had to deal with bad childhoods. But it happens.

Within tears, find hidden laughter; seek the treasure amid the ruins. ~Rumi

Accept the fact that, yeah, you got dealt a rotten hand, and then choose to do something meaningful with the rest of your life anyway.  You’ve seen some of the worst aspects of human nature – you’ve lived it – so you know exactly what it is you don’t want in life. Flip it around and focus on what it is you do want and work to build more of that. Use what you’ve been through to make the world a better place for everyone. Your experience leaves you uniquely positioned to help others, if that’s what you’re inclined to do. Something meaningful, something beautiful, can still be born out of your pain and suffering, if you choose it.

It is those of us who have been broken that become experts at mending. ~Steve Maraboli

I’m not saying it’s easy and I’m not saying that choosing to look for the positive means that you’re never going to relive that old pain again. I try very hard to look for the positive and to focus on the light, and some days I’m more successful at it than others. Some days I’m not so good at it at all. Some days I get angry with myself for not being able to pull myself out of the funks I find myself falling into. Some days I realize that I have every reason in the world to be in those funks — I have been through hell and back more times than I care to count — and I just let myself feel it. Some days I’m scared that I’m heading back into full-blown clinical depression and I just feel like crying.

But most days are OK. Some days even really good days. And some days I’m even able to turn on the sun and bounce through the day like the happy shiny puppy that I want to be. And those are the days that help me to keep going because they are the ones that show me that happiness is possible. And every day I try again, because I know what a difference it makes, and I know that giving in to the darkness would mean that the person who hurt me all those years ago won. And there is no way in hell I’m going to let that happen.

Choose to create something amazing

Child abuse is not a choice; it is devastating and the fallout lasts forever. I didn’t choose what happened to me. It wasn’t my fault, and there’s nothing I could have done that would have made the situation any different. But what’s done is done, and the past cannot be changed; it can only be accepted. And I can choose to either continue to be a victim of that past, or I can choose to create something good out of it; I can choose to use the shattered pieces of what became of my life to build something wonderful.

Yes, it’s harder when you have all of that history to contend with but I have to believe that just means that whatever it is I create with it will be all the more amazing. I am making a choice; I am choosing to heal. I’m doing it every single day. And so can you.