Everyone is Scared (So Don’t Let it Stop You!) 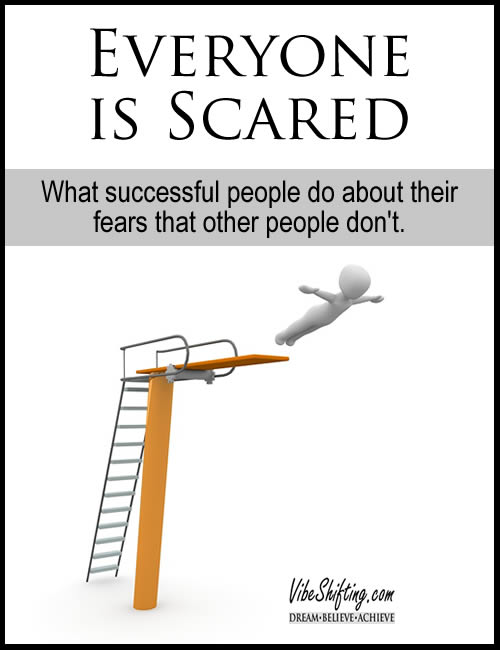 When you look at people like Richard Branson, or Arianna Huffington or Anthony Robbins or Warren Buffet or Oprah, what do you think, and how do you feel? These are all names that we associate with success. Massive success. Wealth. Power. Fame.

When we see this level of success, most of us tend to automatically assume that we could never get there ourselves. It’s so far out of our own reality that it seems impossible. These people seem “other” to us. As if they were endowed with some magical personal characteristics or abilities that we do not and could never hope to have.

These people are so confident, in some cases, almost to the point of brashness. They always seem to know exactly what they’re doing and where they’re going. They never seem to doubt themselves or show any hint of fear. They seem utterly fearless to us.

But really, they’re not.

And that fearlessness is what sets them apart (or so we think). Because we know how many fears we ourselves have. We look at the lives of these “others” and we compare ourselves to them and we are envious and afraid. We wish we could be like them, but we don’t believe it is possible. We just don’t have the kind of fearlessness we think is necessary to achieve that kind of success.

What successful people do differently

Now, they’re not as scared as you are. But that’s not because they’re fundamentally different from you. It’s just because they have a LOT more experience in facing down their fears. They have a better understanding of where those fears come from, what they mean, and what to do about them. They’ve trained themselves not to hightail it in the opposite direction whenever they get scared. The biggest difference between these “others” and you is that they do not let their fears call the shots in their lives.

Change the way you look at fear

And that’s what you need to do. Change the way you look at your fear. Instead of allowing your fear to be a roadblock between you and your dreams, start looking at it as a blatant, larger-than-life, flashing neon sign saying “everything you want is this way”.

What we fear most is often the key to our greatest potential and our greatest gift. It’s often the most direct path to your true purpose in life, and the guidepost that allows you to rediscover that that unique gift that you brought to this world; the gift that only you can give.

Everyone is scared. Everyone feels fear. The difference between success and failure is what you choose to do when you feel your fear. Allow yourself to feel your fear, but don’t let it stop you.