Committing Yourself to Your Dream 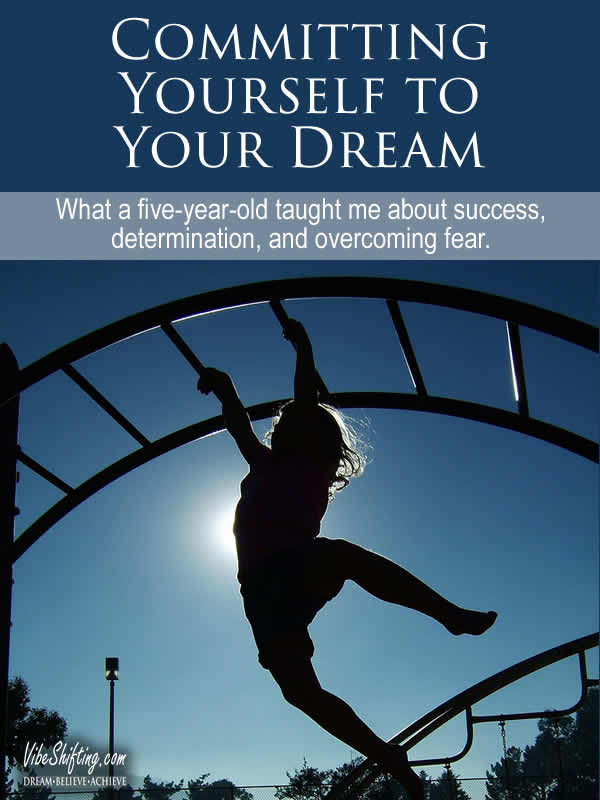 I recently learned an interesting lesson about the importance of committing yourself to your dream and what it really means to know that you’re going to make something happen or achieve a specific goal. My teacher for this particular lesson was a little kid, and she taught me an awful lot about success, determination, facing your fears, and making big dreams come true.

You’re going to be scared

I took my kids to the park recently, and it was fascinating to watch my daughter, five years old, conquer the monkey bars for the first time. She’s never been able to do them on her own before, but on this particular day, she was adamant that she was going to cross those bars by herself.

She looked scared with her feet dangling so far off the ground, but she was determined to succeed: Click To Tweet

So I sat on the bench and watched her as she climbed the two-bar ladder and teetered precariously on the top rung, stretching herself as tall as she could while trying to keep her balance, and then finally catching hold of the first bar and hanging from both arms. She looked scared with her feet dangling so far off the ground. But she was staring up at the next bar with such determination that I stayed put on my bench, watching.

I could see her reaching out her hand to grab that next rung… big blue eyes going wide with fear as she felt herself swaying, unsupported in midair, fingertips just brushing the bar before she lost her grip and fell to the ground with a startled yelp.

I jumped to my feet, ready to run to her, but she picked herself up and looked up at those monkey bars. Determination set in her little face and she climbed back up that ladder, reached out for the first bar above her head again, stretched as tall as she could possibly make herself and grabbed it. Again she reached out for the second bar… and again she fell to the ground without making it.

…but you get up again

She sat there looking dejected for a few seconds before she went through the whole process again. Again and again she tried and again and again she fell to the ground. Every time, she was sooo close to grabbing that second bar but it remained, elusively, just outside her grasp.

And then, on about the sixth attempt, she was finally able to swing herself to the next bar and dangle from it. And there was such surprise on her face. Such joy. She was so proud of herself… absolutely elated at having finally been able to “do the monkey bars” on her own.

It’s not about “trying”

Some people would say she achieved this goal because she didn’t give up trying. I think she did it because she wasn’t focused on trying… she was flat out determined that this particular day would spell her success. And she wasn’t prepared to go home again until she made it happen.

They’ll tell you that you can’t

We tell ourselves all sorts of things when it comes to our dreams:

We let the outside voices and opinions, and the limitation of what’s already been done prevent us from doing what we know, deep inside of us, that we are meant to do.

You have to know that you can…

Or, at least, that’s what happens until we become determined to ignore all that crap and do what’s in our hearts despite it all.

The point at which we become certain that what we want WILL BE is usually when it does. Click To Tweet

…and nothing’s gonna stop you

I think, on some level, my daughter understood that.

She had a goal in mind – a dream in her heart – and she wasn’t going to let anything stop her from making it happen even though everything was against her:

But none of that mattered to her. She wanted the monkey bars, and she was going to conquer them no matter what. She didn’t care if she was too small, she didn’t care if no one else her age could do it, she didn’t even seem to care how many times she fell. She just got up and changed her approach a little bit every time.

Launch yourself into your dreams

And in the end, she did it. It wasn’t a big dream as far as dreams tend to go… but it was important to her. And she made it happen. And now, she knows that she can. And when the next dream comes along, I have no doubt that she will launch herself into it and make it happen for herself, too.

And that’s what it means to commit yourself to your dream. You need to be determined. You need to get yourself into that space where you know that it’s going to happen. You need to be able to ignore all the outside voices that say you can’t. And, yes, you need to be willing to pick yourself up off the ground over and over again.

Monkey bars or mansions; it's all the same. This is what it takes to #succeed in building a dream: Click To Tweet

And sometimes, the best ones to teach us this are little kids.

Have you ever had an experience where you “just knew” that something was going to happen? A moment where you knew with absolutely certainty that you were going to achieve a goal that you had never been able to achieve before?