Is there an easier way to achieve your goals? 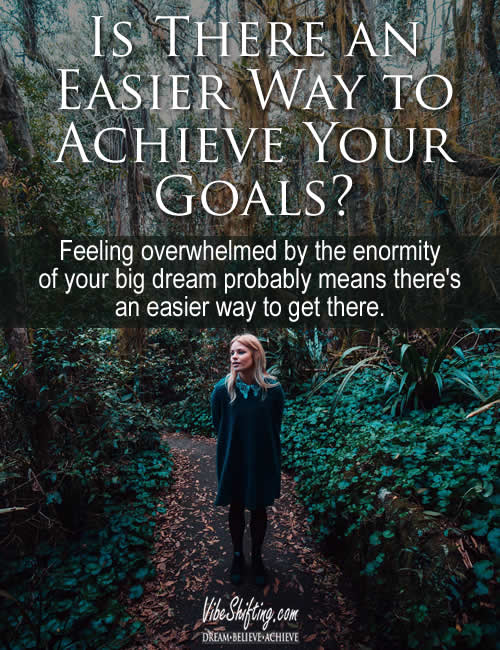 Do you ever wonder if there’s an easier way to achieve your goals? Do you ever feel as if you’re somehow making things harder for yourself than they really need to be? Do you ever get hit with that “there’s got to be a better way” feeling when you’re just feeling overwhelmed by the enormity of what you’re trying to build or accomplish?

Here’s a secret: when you’re feeling that way, it’s kind of a big clue that there IS a better way.

It harkens back to that concept of responding versus reacting to situations. When we are in reaction mode, we’re completely in that blind, automated way of functioning. We’re using the more primitive parts of our brains and behaving in a pre-conditioned way to a situation.

When we respond to a situation, however, we’re using the more evolved parts of our brains and behaving in a more thoughtful and reasoned manner. We’re thinking about the situation first, before acting on automated instinct.

So today’s mantra is: THINK.

When we take the time to think about a situation and assess it properly, we can often find a better way to deal with it. We often find that our initial response was incomplete.

By taking a step back, we can see the bigger picture, and we realize that there are other avenues open to us that can help make the obstacles we’re dealing with easier to overcome, or even help us to avoid them altogether.

For example, it snowed all day on Sunday. I mean ALL day. There was a good foot of snow on the driveway when I went out to shovel at around 8:00 pm that night. It took me about an hour to clear it away.

The plow woke me up at about 4:20 the next morning. It left a pile about three feet deep, and equally wide, at the foot of my driveway. So I got up to go shovel it because I knew the ex would be dropping the kids off in a couple of hours, and there was no way he was going to be able to get the car into the driveway over that enormous bank.

If you’re feeling overwhelmed, it’s a clue that there’s a better way of getting there. Click To Tweet

I got about ten minutes into it (cursing profusely at the evil snowbank and thinking how much I loathe winter, and just generally getting myself into an absolutely foul mood) before I realized that what I was doing was ridiculous. Clearing a 3x3x6 foot patch of heavy, compacted snow would take me hours. Literally hours.

It would make far more sense in this case to call a one-off snow removal service and shell out the $30 to have someone else deal with it. Also, given that the snow plow had already gone by, my ex would be able to safely park on the street, so it really wasn’t critical that the driveway be accessible.

My point here is this: Sometimes we make things more difficult for ourselves than they have to be. Sometimes, we tell ourselves that we can’t do what we want to do in life because there’s something in our way. Sometimes we expend so much emotional and physical energy fretting about and fighting against an obstacle that we miss the obvious: there’s a better way to deal with it.

Because sometimes the enormous obstacle that we see in front of us can be avoided if we just change the way we think; if we approach it from a different angle; if we open our minds to alternative solutions. 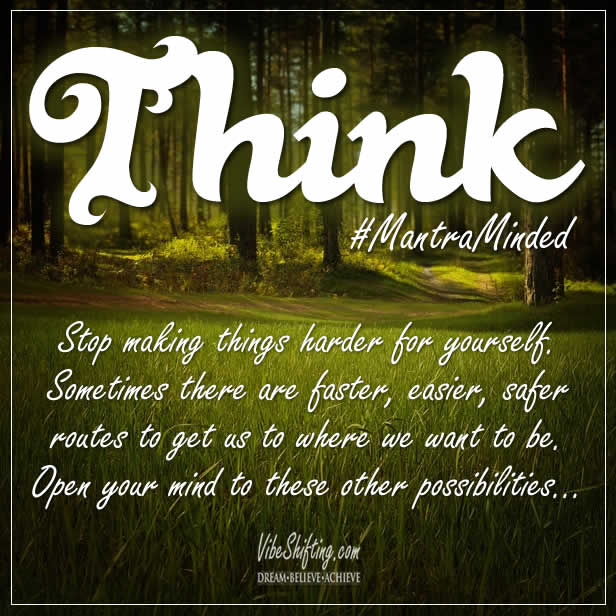 And sometimes, we pour our energy into one thing, thinking it’s the right thing to do, when in fact it would make more sense (and get us further towards our dreams) if we poured that energy into something else, instead.

Know where to focus your energy

For example, we stress out over the latest social media thing that we’re “supposed” to be doing to reach our target clients in a mistaken belief that we “need to be everywhere” (even though it makes more sense to concentrate on refining what we’re already doing, rather than scattering our efforts even further).

Or we worry incessantly about how competitive the field we want to be in is and convince ourselves that we’ll never be good enough to make it happen because of obstacles A, B and C. And then we stare so long at those obstacles that they’re the only thing we can even see anymore and we start to self-sabotage every attempt we make to get to where we want to be.

Know where to focus your energy in order to achieve your goals. #think #mantraminded Click To Tweet

In the case of my snowbank, I could have spent half a day shovelling it, and lifting hundreds of pounds of snow onto the already-shoulder-higher mountain of snow on my tiny patch of front lawn. But that would have resulted in hours of wasted time, and most likely an injured back that would impact my ability to function at all for at least a week.

Far better it was to just call for help and let someone with the proper tools deal with it while I went back inside, had a cup of coffee and wrote an article.

Find the easier way to achieve your goals

In other words, never waste your energy fighting a losing battle. Instead, THINK your way through it before you start panicking or throwing yourself into frantic, wasted effort.

When you have to cross a beach, you can either slog your way through the loose sand or you can walk along the edge of the water where the sand has been packed by the waves and is easier to walk on.

When you’re walking through snow, you can flounder through the deep stuff, or you can walk where other people have already broken a trail.

When you’re crossing rocky terrain, you can try to pick your way through the ankle-twisting smaller rocks in an effort to move in a straight line, or you can zig-zag from one large, stable boulder to the next.

If you think there’s only one way, you’ll miss the faster, easier, safer ways. #success Click To Tweet

In all the above cases, if you refuse to give up, you’ll eventually get to where you’re going – but one means of travel will get you there faster, easier, and with fewer injuries than the other, even if sometimes you seem to moving in a different direction than your end goal.

But if you’re completely focused on where you want to be, you might miss the easier routes. You might convince yourself that there’s only one way of getting there. You might not even see those faster, easier, safer roads.

So open your mind. Before launching yourself into desperate action, ask yourself if there is a better way to handle the situation.

Brainstorm different possible solutions. Assess the best ones. And then act accordingly.

Sometimes you’ll find a way around the obstacle on your own, and sometimes you’ll realize that the best thing to do is ask for help. Either way, you’ll save yourself time and effort. And you’ll be back on track to your goals faster than you had ever thought possible.