The Right Kind of Action 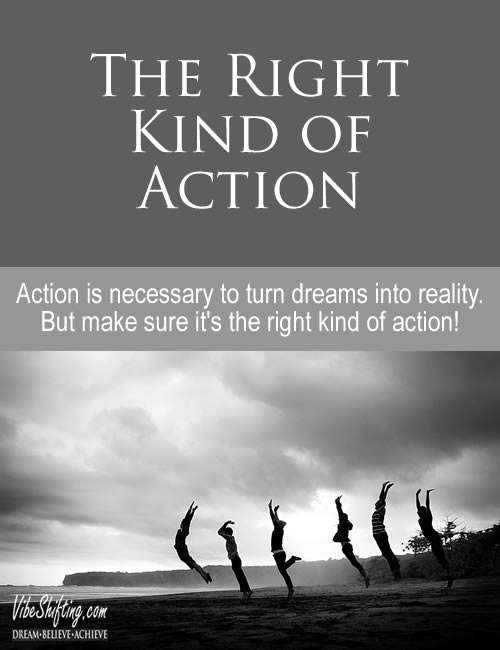 You’ve been told that you have to take action in order to make your dreams a reality. In fact, I’m one of the people who keeps telling you this ad nauseum. And that’s because it’s important.

You can’t make a dream come true just by wishing that it was true, or by just thinking happy thoughts about it. It just doesn’t work that way — you have to start moving so that the Universe has a chance to work on your behalf. If you’re out there doing things, it’s much easier to line possibilities up for you than if you’re say, sitting at home on your couch watching inspirational Oprah clips from the 90s.

But the thing about action is that it has to be the right kind of action. This is super important, and it’s something that so many people get wrong. So many people “you must take action”, so they rush out and try to force things to happen by doing, doing doing. Sadly, while that is action, it’s not the kind of action that’s going to help you achieve your goals. In fact, when you try to force things to happen like that, you’re more likely to mess things up and inadvertently throw all kinds of roadblocks up in your own way.

The wrong kind of #action can mess up your dreams. Make sure you're taking the right kind! Click To Tweet

I know you’re dying to find out more, so watch the video and get the whole scoop! (And hey, if you enjoy the vid, why not subscribe to my YouTube channel so you never miss a drop of VibeShifting video goodness!)