Become a Dreamer Who Does 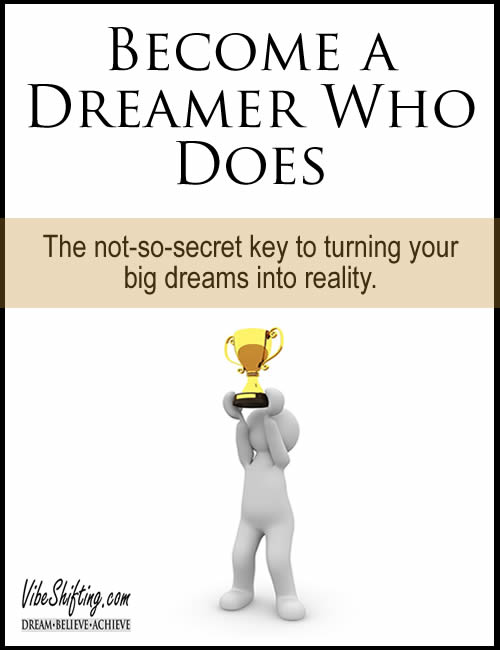 Most people like to daydream about things – all the “what ifs” that fire the imagination and make life more exciting — but they’re not generally willing to put in the kind of work and take the kind of risks that are necessary to actually build those dreams in reality. They’re just not prepared to become a dreamer who DOES.

But for those who are willing to commit to making big things happen in life, there’s an understanding that it’s going to take a little sweat equity to get there. That doesn’t mean that the process of building your dreams has to be hard or painful, but it does mean that you are going to have to get off your couch once in a while in order to make it happen.

Action is critical to your success.

In other words, the people who are willing to do what it takes to make their dreams come true prove it with their actions. If you say that you want something, but your actions aren’t backing that up, then you don’t want it badly enough. You need to align what you do with what you say you want if you ever expect to have anything to show for those goals of yours.

Something we’ve talked about at length in previous videos and blog articles is that success does not happen overnight. It usually comes from years of dedication and willingness to do the work to actually build in reality, that vision that once existed only in your mind. You’ve got to be willing to walk the talk if you really want to live that dream.

A dreamer who does gets her hands dirty!

There is an awful lot that goes on behind the scenes of what we like to think of as “overnight success” stories; all the nitty-gritty, un-glamourous, stuff that we just never hear about. There is fear and there is failure; there are ups and there are downs; there is exhilaration and there is despair. There is a dedication and commitment to the dream, and a determination to solidify the insubstantial vision into something real by taking consistent, ongoing action.

This doesn’t mean big, huge, scary leaps and bounds towards your end goal. Sometimes it happens that way, but usually progress towards a goal happens in the little ongoing steps and actions that we take every day to get ourselves closer to where we want to be. It’s those little steps, added together over time, that really make the difference.

It’s about becoming a dreamer who does – someone who understands that wishing is not enough to change reality, but that getting your hands dirty and doing the real work behind the scenes will result in great things down the road.