1621 Focus is the Key to Productivity 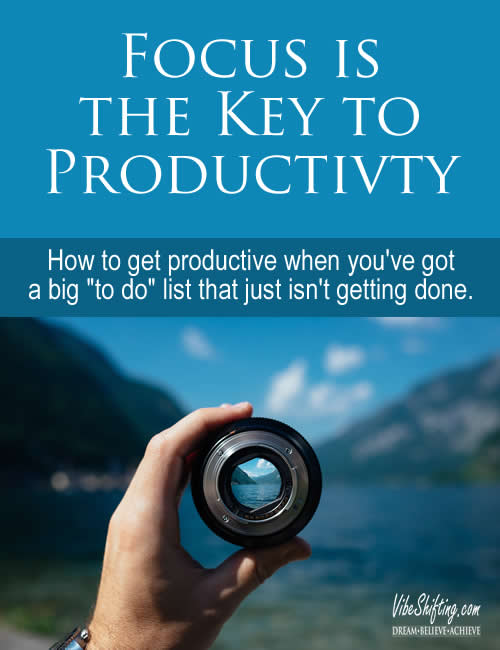 Today we’re talking about the key to productivity, and that key is FOCUS. Being able draw your attention in to one thing without getting distracted by competing priorities and other shiny things.

Back in the spring, so April, May, June – I was finding myself scattered. I couldn’t seem to concentrate on getting anything done in my business. I had loads of lists and mind maps and all sorts of things that I wanted/needed to get done, and all sorts of cool things that I had “in the works” for Vibe Shifting… but none of it ever got to the launch stage, and I just couldn’t seem to get myself to actually make any progress on any of them.

Spinning your wheels (and getting nowhere)

So much to do, and yet I couldn’t keep myself focused long enough to get any of it done. And the guilt really started piling up – I’d start working on consolidating all my lists, then I’d start working on a blog article, then I’d realize I still needed to do the graphics for another article, then I’d think that I really needed to do more promotional stuff for my book, or at least update the web site. And it just felt like a constant whirlwind.

It was that classic scenario where you’re spinning your wheels and it feels like everything is “go go go!” but at the end of the day, there’s just nothing to show for it.

And this went on for weeks. Until I just had this lightbulb moment — one of those “physician, heal thyself” moments, where I realized I was not following my own advice. (Sometimes, I really think I would spare myself a lot of distress if I would just take some time out to reread my own blog once in a while!)

I realized that what was happening was the scatter effect – I had sooo many things on my to-do list, and I was trying to make sure that they all got dealt with, and I was madly flitting about from one list item to another, that the result was that NONE of them got dealt with – and more stuff just kept getting added to the pile.

This is a classic productivity mistake, and quite frankly, I really should know better by this point, but this kind of scenario tends to creep up on us, and it’s something that we all do. We all deal with this.

And, as we talked about in last week’s podcast, the really important thing to remember is that when you’re struggling with productivity, multi-tasking is the kiss of death. You can’t make progress on ANY of your to-do items, until you narrow your focus and just get ONE of them done.

“If you chase two rabbits, you will catch neither one.” ~Russian proverb

When you’ve got so much going on all at once that your brain is pretty much on overload – this is not the time to try doing many things at once. Though you have many things to do, you have to understand that trying to work on them all at once scatters your energy to such an extent that whatever action you try and take is going to be so diffuse that it has little to no effect.

That’s the thing with multitasking: If you’re constantly interrupting what you’re doing to work on something else, it takes time to shift your focus over to the next project and familiarize yourself with that new kind of task.

And if you’re doing this all day – flitting about from one task to another all the time, all those bits of refamiliarization time really add up over the course of the day.

The more times you switch your focus around, the more that “distraction factor” adds up, and the LESS time you’re actually spending getting stuff done. Focus is key to productivity.

You have to focus your energy in order to make it effective – in order to channel that energy into actual results. In other words, to borrow an electrical term, you have to stop working in parallel and start working in serial in order to get the results that you want.

It’s about prioritizing. You may have a lot of really important things on your “to do” list, but when you’re in overload mode you have to pick ONE thing to concentrate on at a time.

It can be the most important thing, or the thing you think you can get done fastest, but just pick ONE thing to concentrate.

“The key is not to prioritize what’s on your schedule, but to schedule your priorities.” ~Stephen Covey

Pick that thing that you’re going to work on NOW and the focus yourself on that alone until it is done and you can cross it off your list.

Then, and only then, do you move on to the next thing.

So, for example, in my spring-overwhelm case, I decided that what I most needed to do was to get my summer content pulled together before the end of the school year so that I could keep my blog/podcast and YouTube channels going while the kids were off school because I knew that with the kids home all day, my writing time would be sporadic. And I knew that not updating my blog would cause me stress, so that became my first priority.

I also knew that I really wanted to get my new book series started, and having the blog content prepared for the summer already would give me the ability to dedicate myself to book writing whenever I did have time to write over the summer.

So what I did was give myself five days to pull together all the video and podcast scripts and blog articles, and just get those all drafted. I decided that everything else would be put on hold. So, the book outlines, the workshop content, the new training programs, the research and updates to my first book – everything else that was on my “to do” list got put on hold and I focused completely on getting those seven articles drafted in three days.

And I got them done.

I focused on each article until it was done before I moved on to the next one. And it worked so well. I got all the content done by the end of June.

And here’s the really great thing: not only did I get all that done (so, I made progress), but getting such a big priority done also gave me a boost of inspired action energy to get the next priority done, too, and I got the draft of the first book in my new series done. And that in turn inspired me to get the outlines for several other books in that series done, which inspired me to get the draft for a stand-alone book done, too.

So there was kind of a cascade effect there, which was awesome.

When things go off track

Now, I’m not saying that everything turned out perfectly, because it didn’t. For those of you who’ve been with me for a while, you know that the blog and the podcast pretty much ended up in hibernation mode for the summer.

So what happened there? If I managed to get all the articles drafted by the end of June, what the heck happened? Why didn’t they get posted to my site as planned?

“Be like a postage stamp—stick to one thing until you get there.” ~Josh Billings

Well, that is a classic example of an epic batch-processing fail.

But I didn’t. And that’s where things fell apart.

If you’re going to batch process stuff, be sure you have a clear idea of ALL the batches that need to be accomplished to reach your deadline. You need to know what your COMPLETE process looks like, or else you end up with a backlog at certain points along that process where your flow gets constricted.

So that’s what I want you to keep in mind next time you’re dealing with an impossibly huge “to do” list. I want you to take a step back, figure out what your process and what your focus points will be along that process or flow. And then pour yourself into each focus point to get everything done.

“We can do anything, but we can’t do everything… at least not at the same time. So think of your priorities not in terms of what activities you do, but when you do them. Timing is everything.” Dan Millman

Decide on ONE thing to work on first and then just get it done – let the other stuff simmer on the backburner while you get ONE thing done. THEN move on to the next thing and get it done.

Work on one focus point at a time, and don’t scatter your energy by multitasking and flitting around from one priority to the next. Get results on one task, and then move on from there.

Your ability to stay focused on one thing at a time – and get it done — is critical to getting you closer to your biggest dreams and goals; focus is the key to productivity!