1603 Crazy Enough to Change the World 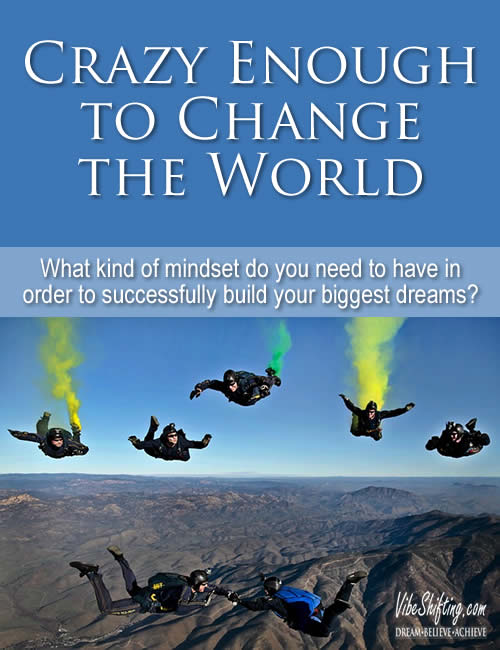 Today we’re talking about the kind of mindset necessary to build a dream and change your world. There’s a quote out there from Steve Jobs that I love, and he said that “it’s the people who are crazy enough to think they can change the world who actually end up doing it”.

If you’ve got a big dream in your heart, you’re going to have to be a little crazy to make it happen, at least according to the current standards of society. Building a dream takes a kind of dedication and commitment to a long-term vision that most people just aren’t willing to put in. We’re an instant-gratification kind of society, and if it’s not happening now, we tend to lose interest quickly.

The kind of mindset you really need

The mindset that you need to stick with something for the long haul, even when you’re not seeing results, is what differentiates the successful from those who are not. You have to be willing to push through those initial, totally un-glamourous foundational stages before you get to the part where you’re living the kind of life you want.

And it can be very frustrating, especially when the vision within you is so clear that you can almost reach out and grab it. It’s frustrating when you know what you want and you’re working so hard towards it and you’re just not getting the kind of results that you want.

That’s where the crazy comes in. Because this is the point at which most people give up in the belief that “it’s never going to happen”. They become susceptible to all the “I told you so”s and unsolicited advice from everyone around them, and they make the decision to pack it in and “be reasonable”.

They opt for the safe route because they don’t know what else to do.

Sometimes, one more step is all you need

But what if these people just had to stick it out a little bit longer to start seeing the results they were after? There’s a cartoon out there, I think I’ve got it on one of my Pinterest boards actually, and it shows a tunnel in which a man with a pick axe has turned his back and is walking away from his digging. But what he can’t see is that there is only the smallest sliver of dirt left between him and an enormous cache of diamonds.

He had been digging his tunnel for so long without finding anything, that he gave up in despair… but if he had just gone the tiniest bit further, he would have found more than he had ever even dreamed of in the first place. If he had just been a little bit crazy and kept going when everyone else would give up, he would have made his dream a reality.

Reconnect with your centre

I’m not saying it’s easy, because it isn’t. When you’re not seeing those results despite everything you’ve already poured into this thing, and you’re up against a wall of outside opinion that tells you to give up, and you’re dealing with your own inner gremlins who are telling you that maybe this was a bad idea to begin with… pulling your mental and emotional resource together enough to keep going is one of the hardest things that you will ever do. And it may very well feel like the crazy, irrational thing to do.

But it’s at times like these that you need to take the time to reconnect with your centre. Tune out everything outside of you and focus. Take a good look at what you’ve been doing and see it there are tweaks or changes that you can make. Look and see if there is another path that might get you over, under, or around your current obstacle. Seek advice or assistance if you need to. Most of all, reconnect with what your gut is telling you. If this is still the right direction for you, you will know it in the deepest part of you.

Most people won’t take the risk. Most people won’t embrace crazy. Most people are not willing to work through the discomfort that comes with pushing the boundaries of their safe little comfort zones in order to grow enough to create the kind of life they like to daydream about it.

This is what differentiates success from failure; this is what spells the different between idle fantasy and concrete reality: the willingness to do what it takes to make it happen, even when the outside world is telling you you’re nuts.

So go ahead. Be a little crazy. Crazy enough to change the world…