Is Law of Attraction Real? 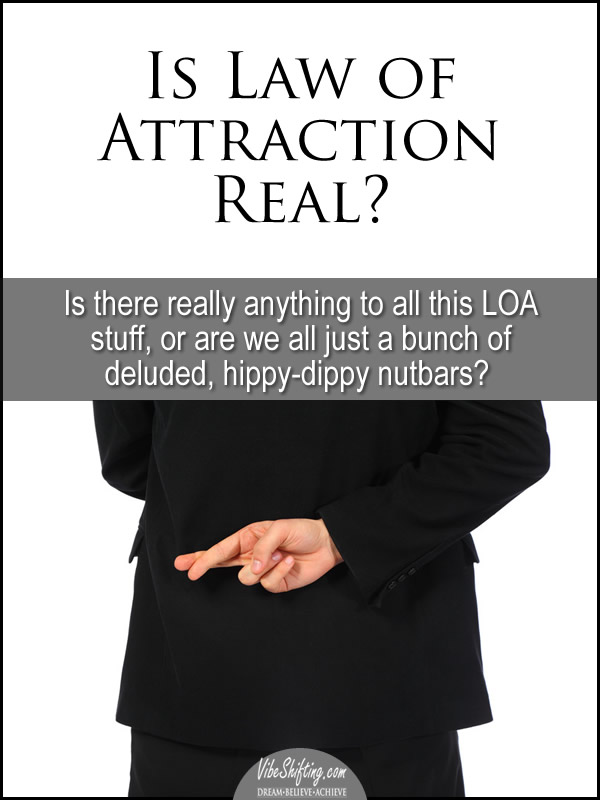 In the Vibe Shifter’s Tribe last week, one of our group members mentioned that she was afraid that everything she was learning about spirituality would turn out to be a lie. Which leads us to today’s post about whether all of this stuff that we keep seeing and hearing about Law of Attraction and creating our own reality is truth or just a pretty fiction that we’d all like to believe. In other words, we’re asking: is Law of Attraction real, or is it all just a big fat scam?

For those who are new to this whole concept of being the ultimate creators of our own reality, it’s all pretty heady and exciting at first. When you first come across this stuff, you feel that instant connection to it. It resonates. Deeply.

But as you start paying more attention to it and experimenting with it, and maybe you’re not having the kind of “success” with it that you want to have, you start doubting yourself, and you start wondering: is this stuff for real, or am I just turning into one of those hippy-dippy dreamers who’s going to end up broke, bitter and disillusioned if I let myself get sucked into it any further?

When I first started out on my own journey, I was reading a lot of Abraham-Hicks stuff. And I came across a lot of stuff on the internet that was slamming Esther and Jerry Hicks as frauds who were milking the whole “channeling” thing for all it was worth.

And I really started to doubt everything I was learning. What if they were lying? What if what was ALL a lie? What if all this stuff just resonated with me because I desperately wanted answers in my own life? I didn’t want to be some gullible, flaky, New-Agey nutbar with stars in her eyes and no concept of the “real world”.

If it works, who cares where it came from?

But one day it occurred to me: who cares if Esther and Jerry Hicks are lying about Abraham? Whether Esther really channels Abraham, or whether she just believes that she does, or whether she just made the whole thing up as a brilliant marketing scheme…. it really was irrelevant. It didn’t matter.

Because the material she was providing — what she was saying — WAS important. And it was changing people’s lives all over the world. There are no end of people out there who will tell you how much of a difference Esther and/or Abraham have made in their lives, how much things have improved for them, and how much happier they are since they started implementing the practices she/they describe. So what did it matter where that information came from?

In my opinion, there are too many stories of how this stuff has made radical changes in people’s lives, all over the world, for all of this to be coincidence. In my opinion, this stuff works — whatever it is and whoever came up with it, it works. And that, to me, is far more important than whether some of the people out there who are hawking this stuff are just doing it for a quick buck. (And I am not, in any way meaning to imply that Esther/Abraham fall into that category, by the way — I don’t believe that they do, in point of fact.)

Use your head and trust your gut

But if there are people out there who are just looking to make as much money as they can by taking advantage of desperate people, how do you protect yourself from the crooks and the creeps? Especially when you’re coming to this stuff from a place of vulnerability and are in need of spiritual and emotional healing?

When you come across those shyster types of people, you’ll know; just trust your gut – you’ll get that “ick” feeling the second you come across them. Just trust that instinct, move on and find someone else to learn from, instead.

Yes, there are an awful lot of snake-oil salesmen out there who have jumped on the bandwagon because they sense a fantastic opportunity to make lots of money off of other people’s misery and desperation, but there are also a great many teachers out there who do teach this stuff from a place of honesty and a real desire to help people improve their lives. (I highly recommend Melody Fletcher, for instance. She’s got a huge waiting list, but she is absolutely amazing.)

So, is Law of Attraction real or not?

I personally do believe that all this Law of Attraction stuff is real. In my experience, there are downsides to positivity and optimism when they are adhered to without any rational thought. But for the most part, a positive outlook on life leads to a far more pleasant experience of that life. I know from multiple experiences in my own life that there are forces at work in this world that we do not fully understand yet. And I also know what a difference the principles of LOA have made in my own decades-long struggle with clinical depression. And that’s proof enough for me.