1612 The Problem with Pessimism 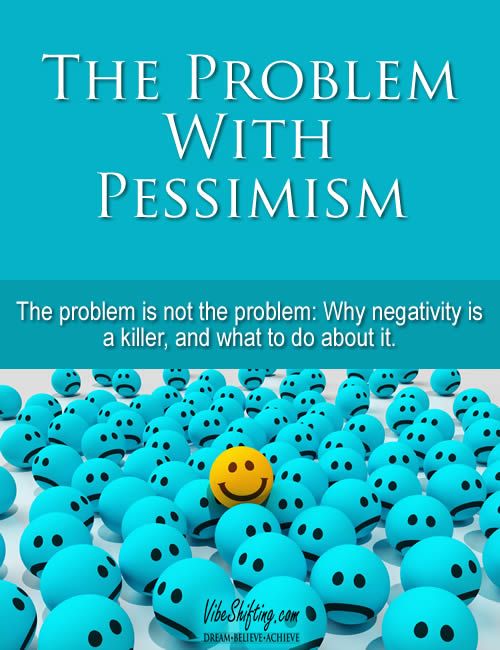 Today we’re talking about the problem with pessimism, or why pessimism is such a counterproductive mindset and perspective to get stuck in when you’re trying to build a dream.

I see so many people out there who have such high ideals about what the world could be – when it comes to whatever cause they believe in, they have astounding amounts of energy and passion and even the organizational and motivational skills to really have an impact and change the world… if they did it right. But so often what happens is that they’re just not doing right.

The world needs dreamers who become doers; those who turn what COULD be into reality. Click To Tweet

They are so focused on outrage and negativity being “anti” whatever that they’re actually working against themselves. You can’t build something beautiful by focusing on scare-mongering and worst-case scenarios. They are pouring their energy into creating more of what they don’t want, and they don’t even realize it.

Focus on love, not hate

The bigger problem with this is that when this kind of pessimism and fear takes root at a societal level, the energy that gets poured into the “what we don’t want” is multiplies by millions and millions, and that, as the good Doctor would say, is “extremely very not good”.

I was once asked why I don’t participate in anti-war demonstrations. I said that I will never do that, but as soon as you have a pro-peace rally, I’ll be there. ~Mother Teresa

What we focus on expands and what we resist persists. To put it in different terms, if you want to make any kind of change, focus yourself and all your energy on what it is that you want to create, or what you want to see more of, rather than focusing on what you hate.

What kind of tomorrow do you want to see?

This whole concept is beautifully illustrated in a movie I caught a while back that helped restore my faith in Hollywood, in the sense that it was the first time, in a very long time, I’d seen something that didn’t glorify doom, gloom, pain and misery.

The movie was called Tomorrowland, starring George Clooney, and it was a movie about our collective addiction to fear, disaster, and general apocalypse, and how our belief that the world is going to hell in a handbasket is creating a self-fulfilling prophecy.

Truth is, most people will NOT build their dreams b/c #complacency is so much easier. #entrepreneur Click To Tweet

It talked about how people seem so much more willing to believe in the worst because it’s easier and it demands nothing of you today. Such an important point: people don’t want to change their negative views because if they believe that the worst is inevitable, they don’t feel the need to get up off their asses and do anything to make things better. So they smugly complain about “the state of the nation” or the “state of the world” and then go back to their celebrity magazines.

That takes bravery. It’s scary to change your beliefs. And this is something I talk about in my book, fearLESS  — most people will NOT build their dreams because complacency and “same old, same old” is so much easier. And it’s this very attitude that will determine what the world we are living in will become.

To paraphrase Captain Jack from the Pirates of the Caribbean movies, the biggest problem the world faces right now is NOT the problems that we have; it is our ATTITUDE towards those problems.

The biggest problem, and the biggest challenge that humanity faces is PESSIMISM… the belief that nothing can change, which then becomes a self-fulfilling prophecy causing us to sit idly by and refuse to even TRY to make things better

Change your focus, change the outcome

The important thing to remember here is that we have the ability to change our focus, at will. All we have to do is decide – and that is what will make the difference.

As they said in Tomorrowland, if we change that channel we’re all on – if we can change our beliefs and our focus – we can change the outcome. You have to believe that something is possible before you’ll take the actions necessary to make it happen.

If we cannot even envision a better tomorrow, how can we possibly build it? This is so important, and it is something that I’ve been teaching over and over and over again on my blog for years – it’s even part of the Vibe Shifting tagline: “Dream. Believe. Achieve.”

But everyone knows the world is a mess!

Now, I know what you’re thinking: “But everyone KNOWS that the world is falling apart! All you have to do is watch the evening news and you can see it happening!”

An excellent reason NOT to watch the evening news. The media has admitted to the “if it bleeds it leads” philosophy with regards to their broadcast material. Your news outlet is specifically tailored to showcase the worst elements of human nature, and the most shocking, horrifying stories it can find, no matter how unusual or statistically unlikely they are to happen to anyone else.

And do you know why that is? BECAUSE YOU KEEP TUNING IN AND WATCHING THAT CRAP!!! They are giving the people exactly what they want to see.

The biggest challenge that humanity faces is #PESSIMISM; the belief that nothing can change. Click To Tweet

Let them know you don’t like sensationalist stories, and they’ll start giving you more balanced look at what the world is really like. And for the record, please note that world is NOT falling apart at the seams. Statistically, we are currently living in the safest time in all of history.

And if you have not yet read the book Abundance: The Future is Better Than You Think by Peter Diamandis, I highly recommend it. It’s a wonderful reminder that whatever problems humanity has created for itself, we have within us the means to fix those problems. In fact, we are ALREADY fixing those problems. Go read the book. Really. You can thank me later.

Get off the misery train

What I want you to take away from today’s episode is that a negative outlook – on your dreams, on your life, or on the world – will never help you to create a positive outcome to anything. And this really is the problem with pessimism; it twists your mind and your energy to create a self-sustaining misery train out of whatever you’re focused on.

Look for the ones who haven’t given up. They are the future. ~from the movie ‘Tomorrowland’

Remember that whenever someone tells you that something can’t be done, or that it’s impossible, it just means that they don’t have the imagination and ingenuity to dream up a solution, or the determination to actually go out there and make it happen.

Remember also that what the world needs most are dreamers who are willing to become doers — who can see what could be and who are then willing to turn that vision into reality. Something that I say in my book is that everything begins with a dream. Every great achievement, every scientific advance, every artistic triumph that this world have ever see… it all began as somebody’s dream.

So dream your dreams and don’t let yourself get sucked into pessimism Believe that you have within you everything that you need to create those dreams. Then go out there and make them happen. Because this is how we will change the world.