The Snowball Effect of Fear 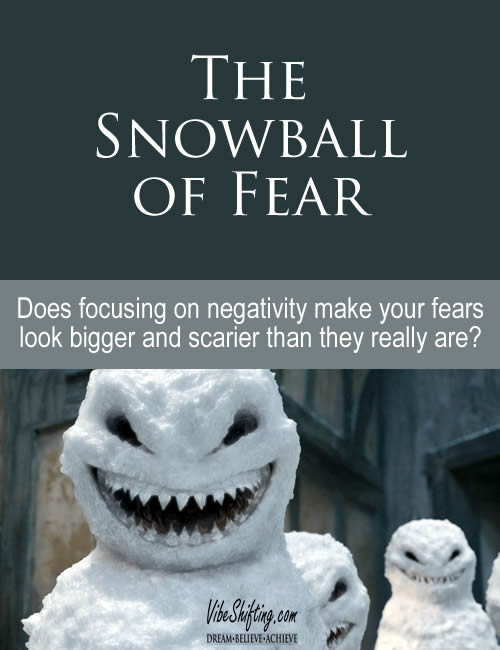 Negative thought processes act like a downward spiral. Dwelling on one negative thought almost magnetically draws more negative thoughts to itself, and then the whole process picks up speed and gets stronger with time, creating a kind of snowball effect that just magnifies that fear into something far worse than it really is.

Sucked into the spiral…

The problem is that once you get sucked into this kind of negativity spiral, it can be really hard to pull yourself out of it. As I said, it gets stronger the longer you stay in it. And because your thoughts affect your emotions, this is a one-way ticket to Depression-Ville and Anxiety City. You can’t be in a positive mental place when you are thinking those kinds of thoughts.

What’s even worse is that once the negativity takes root in your mind it affects your perception by triggering your Reticular Activating System, or RAS for short, which is a filtering system in your brain that decides what you pay attention to and how important the incoming information is.

When #negativity becomes a habit, it's hard to even SEE anything that isn't negative! Click To Tweet

Essentially, your RAS decides what you can ignore and what to pay attention to – it’s super important when we’re talking about fear, and you can learn all about it in my book, fearLESS: How to Conquer Your Fear, Stop Playing Small, and Start Living an Extraordinary Life You Love.

And what happens is that when you start making negativity a habit, your RAS gets triggered to focus on negativity, making it extremely difficult for you to even see anything that isn’t likewise negative.

Think about your dream-based fears in the same way. The more you concentrate on what scares you about your dreams, the bigger and stronger those fears will get. Shift your focus to the outcome that you want to see, however, and that is what you will draw energy to.

Our world, in a very real and tangible sense, is a mirror of our own feelings and beliefs, reflecting what already exists on the inside.  What we see happening around us is always interpreted through the filter of our own emotions and beliefs. Psychologists call this phenomenon confirmation bias. It’s the tendency for human beings to look for or to interpret existing information in a way that confirms their preconceptions.

We see what we already believe the world to be. But change our beliefs & we change what we see. Click To Tweet