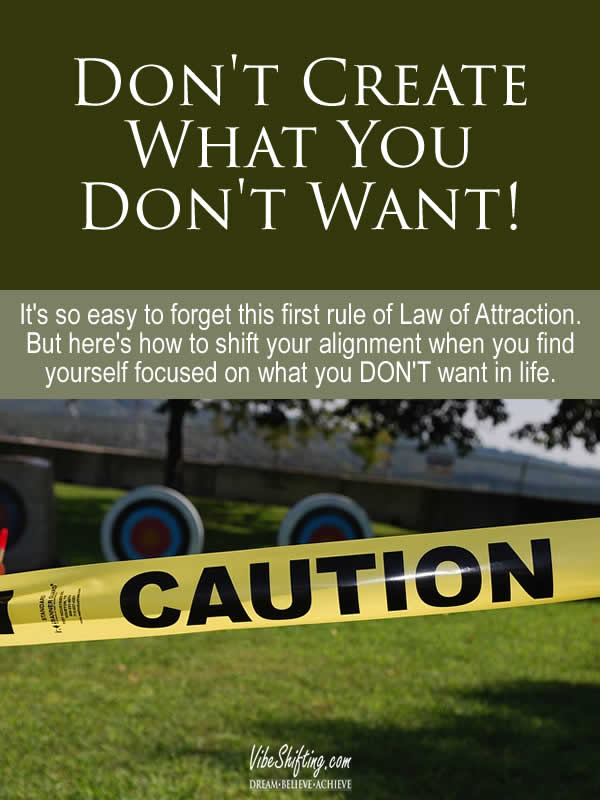 There is one cardinal rule when it comes to Law of Attraction and maintaining your alignment with what it is that you want to manifest in life, and that rule is: don’t create what you don’t want! So obvious, so easy… and yet this simple little rule trips so many of us, so very often; even those of us who know how this stuff works. I just spent the weekend learning a hard lesson in bad alignment and paying attention to what it is you’re drawing to yourself with your thoughts. Here’s what happened…

On Friday afternoon I walked in my door to discover a message from my doctor’s office. All it said was to call them back. I did, but the office was already closed for the weekend. So I started worrying… I had had a routine screening test done a couple of weeks before and hadn’t thought anything of it, but now I was freaked. Doctors don’t bother calling you unless something is wrong. Was there a problem with my screening test? If it was actually positive, did that mean I had cancer? Oh dear god, I did NOT need this – not now. I was already stressed out enough as it was.

My eldest child, seven years old, had been sick with a fever, running between 103 and 105 for ten days straight. It started out as a viral infection and there was nothing to do, the doctor said, but wait it out with plenty of rest, fluids and medication to keep the fever in check.

About a week into his illness, my five-year-old started running the same fever. Two children with high fevers and terrible coughs that kept us all up at night and nothing a mother could do that seemed to make it any better.

Then they developed new symptoms and we discovered that both kids now had bad ear infections on top of the original viral infection, and my oldest had also developed bronchitis. Antibiotics all around. And of course the stuff the little one had to take tasted horrible and made her retch every time she had to take it… so she didn’t want to take it all.

And to top it all off, I was still dealing with complications from the dental surgery I had a few weeks before, AND I was starting to feel sick myself, so I REALLY did not need to spend my freaking weekend worrying about medical test results.

Then I got mad. I really resented the doctor’s office staff for leaving that message in the first place. Who the hell calls a patient up five minutes before walking out the door for the weekend and leaves an ominous “please call us back” message with NO useful information whatsoever?

Would they not realize that would leave said patient in a state of anxiety and fear FOR THE WHOLE WEEKEND? If they weren’t going to give me any info until Monday, could they not have just put off calling me until the following week and spared me two days of panic?

Memories of the past, fear of the future

At one point my kids were downstairs watching a Disney movie and I found myself in my bathroom in tears, exhausted from dealing with sick kids, feeling sick myself, wondering if I was now going to have to deal with a cancer diagnosis, and whether I had the strength to put myself through cancer treatment, knowing full well what those treatments had done to my father and how they hadn’t saved his life anyway. And I wondered what would happen to my kids if anything happened to me.

Fear is always in our thoughts about what COULD happen in the future. Stay centred in the present. Click To Tweet

It was at that point that I looked into the mirror and realized what I was doing. And I knew that it had to stop.

This was NOT the kind of vibration I wanted to be putting out. I realized that by giving in to fear and anxiety, I risked drawing to myself exactly what it was that I did NOT want. I had to put a stop to this; I had to shift my thoughts and shift my vibe.

First off, when I realized that I was aligning myself with what I didn’t want, I thought about what it was that I DID want, instead. I focused myself on the best possible outcome to this situation: a normal test result.

I also tried to be gentle with myself. No getting angry for falling into this negativity trap – I recognized how tired I was, and that, because I was already worried about my kids and about how much school they had missed, that I was already primed for more worrying. 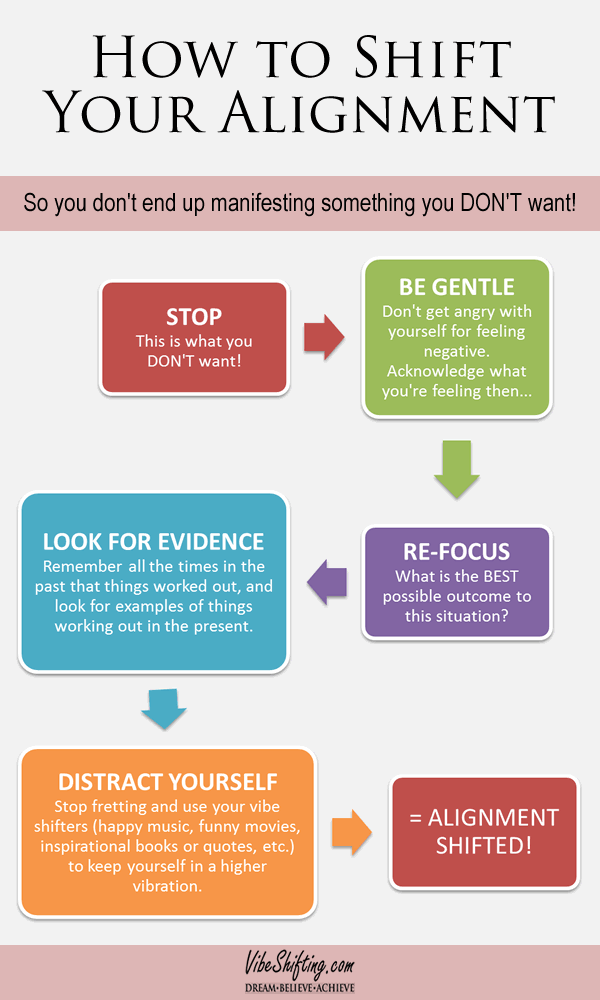 I acknowledged that there was not a damned thing I could do about it one way or the other, and that I would not know for certain what the call was REALLY about until Monday. And that, because of this, I needed to let it go… anxiety and fear come from living in the future; in thoughts about what COULD happen, even when such things are not currently happening, and may NEVER come to pass. Why get myself all worked up over a “maybe, possibly, hypothetically”?

Don't get upset over 'maybe'; until u know for SURE, assume the best rather than the worst! Click To Tweet

I realized that, while it’s true that doctors don’t generally call with test results unless there is an issue, it doesn’t mean that that is always the case. Until I knew otherwise, that call could be about anything… for all I knew, one of the kids could have dropped a mitten or something last time we were there and they were just calling to let me know they had found it.

And then I tried to remind myself that every single time I have ever worried about a medical test in the past, it has ALWAYS turned out OK. Always. No matter what happened, I would be OK. And so would the kids.

Living in the now

So I dried my tears, washed my face, and went downstairs to curl up on the couch with my monkeys and watch the rest of “Bedknobs and Broomsticks”, determined to put it out of my mind and just enjoy the weekend.

“We just wanted to let you know your test results were normal,” said a cheerful receptionist, “have a nice week!”

Fear is always in our thoughts about what the future may hold, even when those things might never happen. I need to remember that next time… before I start panicking for no good reason whatsoever.