1804 Spinning Your Wheels and Going Nowhere 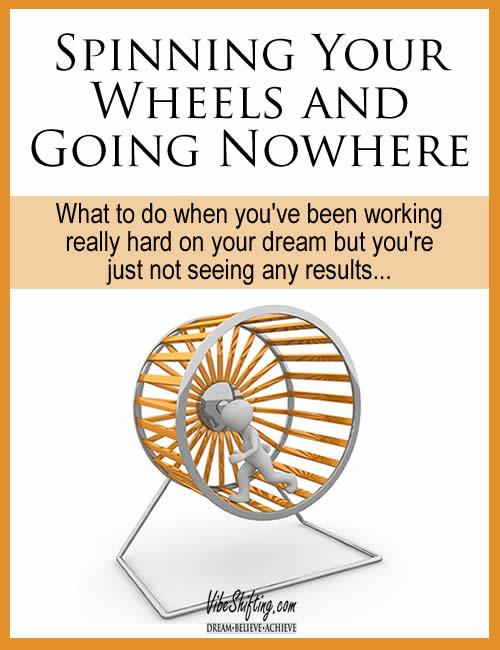 One of the things I mention frequently in my work is the idea of consistency – of making sure you keep working towards your big dream on a regular basis because even small progress adds up over time. But what do you do when what you’ve been doing just doesn’t seem to be doing anything at all? What do you do when it feels like you’re spinning your wheels and going nowhere, and none of your efforts seem to be working?

When you’ve been pouring your heart and soul into something and you’re just not seeing any results from it, you can be left feeling disappointed, disheartened and disillusioned. Because sometimes, even with inspired action on our side, the results we want from what we’ve produced with our inspired action just don’t seem to be manifesting the way we want them to.

In this scenario, we get into this space where we’ve been working really hard on this dream of ours, and we’re actually getting things done, but it just hasn’t been giving us the kind of returns we had hoped for.

For example: You want to be the next JK Rowling and make a billion dollars off movie rights and merchandising for your spectacular book series. So you dedicate yourself to writing your first couple of books and everybody who’s seen the drafts loves them.

At the same time, you’re diligently working to build your platform and figure out your market so you can entice an agent to represent you and shop your book around to all the big publishers you’re certain will love your book if only they would actually read the damned thing.

In other words, you’re doing everything “right” and everything you’re “supposed” to be doing to get yourself a traditional book deal that could lead you to your dreams of Billionaire-Writer-Movie-Mogul-Dom.

But no one is showing any interest in you or your book series. And none of the agents you’ve queried have even responded to you.

As another example: Maybe you’ve been getting all sorts of compliments on the hats and scarves you knit so you decide you want to start selling your wares on Etsy.

So you knit up a storm of stock, take some beautiful pictures, set up your store and list your items. Heck, you even set up Instagram and Facebook accounts for your fledgling business and start showing your stuff to the world, and actually attract thousands of online fans who consistently “like” and “share” your beautiful merchandise pictures with all their friends and family.

But no one is actually buying anything.

In either case, or in any number of cases just like these, one thought then starts to echo through your mind: “This isn’t working.”

So you start to wonder what you’re doing wrong.

You’re doing everything you should be doing. You know that your stuff is at least on par with what others are offering in your field, and they seem to be basking in all sorts of spectacular success. But for whatever reason, you can’t seem to get over that last hurdle between you and your own success. 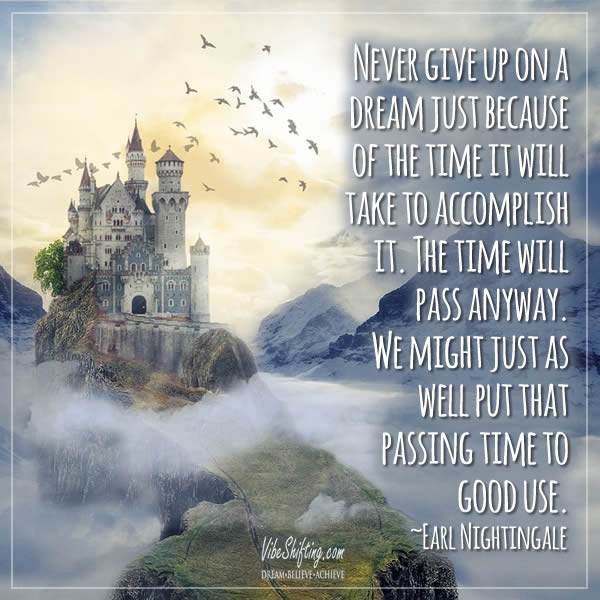 Second-Guessing and Stuck in Place

You start second-guessing yourself and your abilities.

You start to think that maybe you don’t really have what it takes after all, and perhaps you should just give up before you make a total fool of yourself.

Any time you try and work on your dream, you end up unable to concentrate and incapable of taking any further action towards your goal because you’ve started to wonder what the point is anymore. Nothing you’ve done has worked so far, so why bother continuing?

And what happens is you end up stalled. You don’t know what to do that will actually “work”, so you end up doing nothing. And then inertia kicks in – the longer you you’re stuck in place doing nothing, the harder it is to start doing again.

A Matter of Time

But here’s the thing: Very often it’s not that things aren’t working – it’s that you haven’t given them enough time to work.

We live in an instant-gratification kind of world where our Twitter streams are updated in real-time and everything is on-demand. And we expect that building our dreams should work the same way, too. And maybe for the super-savvy, always-aligned Law of Attraction masters out there, it does.

But it doesn’t work that way for most of us. Most of us are not able to keep ourselves aligned enough to make things happen that quickly – not the big things, anyway.

And we’re just not used to that. We’re not used to waiting for anything anymore. So when our dreams don’t start giving us tangible returns on our time and energy investments into them, we automatically start thinking that something has gone wrong.

And so we give up on our dreams too soon.

And the really sad thing is, if we had just kept going a little longer we would have started to see those returns-on-investment that we had been expecting.

You can have all the right ingredients at hand and do all the right things to mix those ingredients into a cake… but if you don’t give it enough time to cook and pull it out of the oven too soon, you’re going to end up with formless batter rather than the cake you wanted.

And that formless batter is part of the process; it’s the soupy stage before the cake happens and you have to be patient while it quietly cooks itself into solid form. But if you don’t know that about cakes, you might come to the conclusion that “cakes just don’t work for me”.

Working hard but still not seeing #results? Maybe it’s because you haven’t given it enough time. Give your dreams a chance to manifest! #podcast Click To Tweet

Everyone has heard the story by now of JK Rowling’s road to literary stardom – the first Harry Potter book was rejected a dozen times before being picked up by Bloomsbury. If she’d given up too soon, none of us would know what muggles are or wish we had pet owls delivering our mail for us.

What this means is that you need to give your dreams a chance to become what you want them to.

It means staying the course even when you’re not yet seeing results from your efforts.

It means not walking away when you’re feeling down because everyone else seems to be so much farther ahead than you are.

It means never giving up on something that is truly important to you.

It means having faith in yourself and in that dream that still shines within you.

Put Your Time to Good Use

So when you’re feeling overwhelmed and wondering whether any of your hard work is ever going to start paying off for you; when you’re doubting yourself and whether you should have ever started down this road in the first place, remember that, like cake batter, your dreams will turn into something awesome as long as you’re prepared to let them “bake”.

As American radio host Earl Nightingale once said: “Never give up on a dream just because of the time it will take to accomplish it. The time will pass anyway. We might just as well put that passing time to good use.”