How to Make Divorce Easier 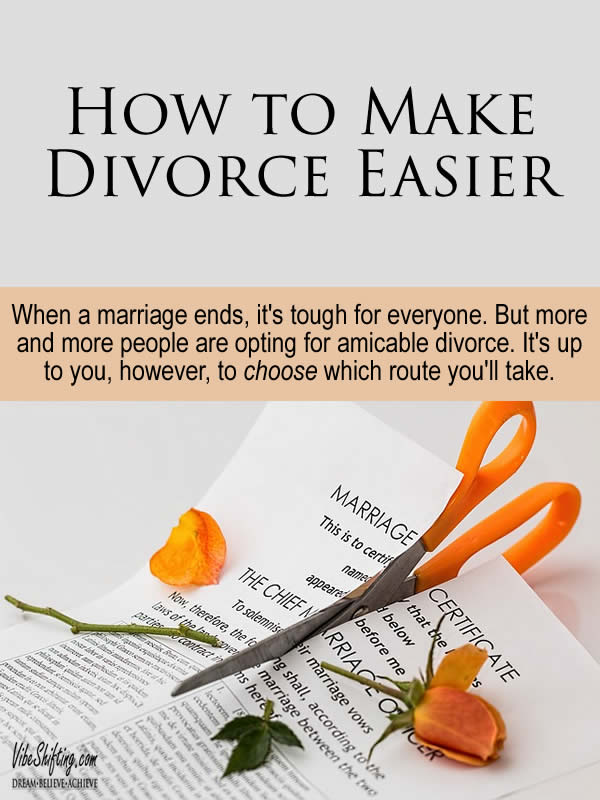 About a year ago, my husband and I split up. Aside from the obvious upheaval, grief, and having to adjust to new circumstances, it’s been surprisingly painless. Most people would think so, I suppose — my ex and I are still friends, we help each other out as much as we can and we don’t hate each other. And, for some reason, that tends to confuse people.

I was at the dentist’s office a while back, for example, and at one point she looked at me very seriously, with a touch of admiration in her voice, and said that it was “really wonderful” how my ex-husband and I were doing things, especially where our two children were concerned.

I looked at her in surprise for a moment and said, “Well, what’s the alternative? Traumatize everyone?”

She said that she had been talking to my ex last time he’d been in and he’d said much the same thing. Then she said that when her own marriage had ended things were very different. She told me that there had been a lot of anger and bitterness involved, and that it had been difficult for her son.

On one level, I do get that. And I know that that kind of situation still tends to be the norm for most people. I also know a lot of people find our situation kind of mind-boggling. They seem to think that when a marriage ends, it automatically has to end in nastiness, vindictiveness and hatred.

For those people, I suppose it probably would. But here’s the thing: as with everything else in life – this is a choice, and there are other options. And, in my experience, more and more people are choosing the alternatives, rather than defaulting to the traumatic route.

How to make divorce easier on kids

I think the key is acknowledging that you’re no longer going in the same direction. If you can recognize and accept that you’re now moving down different paths  — and wish each other well — you can still have some sort of a relationship with that person, even if it’s no longer a romantic one. This is especially important when there are children involved. The children will adjust to a greater or lesser degree depending on how the adults in their lives behave.

Making #divorce easier is a choice; decide what's more important to you: revenge or a new start. Click To Tweet

If you’re nasty and constantly fighting and bad-mouthing each other – your children’s other parent, whom they love – there are obviously going to be problems. (Duh.) If you can find a way to still be friendly, or at least civil, towards each other, however, it helps to makes things easier on everyone.

(Note: I’m not talking about cases involving abuse here. I’m not suggesting that anyone try to be friendly with someone who has been abusive, and if you’re in that situation, get the hell out, any way you can.)

In my case, we worked out our own separation agreement without resorting to lawyers or mediation services. We both recognize how important it is for our kids to have both parents in their lives, and we communicate constantly where the kids are concerned, be it school, health, or general concerns of any kind.

If there are special events for the other person’s family, we’ll adjust our custody schedule to make it work. Likewise, we make things work for major holidays and the kids’ birthdays so that both parents can be there, regardless of whose week it is, and the kids also call the other parent to chat a bit about their day before they go to bed every night.

I think the key to making divorce easier is thinking about what’s important to you. Both my ex and I realized that we had a choice about how we were going to this; once the inevitable was accepted, we had to decide that we were going to make this as easy as we could for all of us. We could either choose to cling to the past and make things messy and painful, for both us and our kids, or we could do what we needed to in order to make things work as smoothly as we could.

That meant not holding onto anger, revenge, bitterness, or grief. It meant focusing on what we wanted our lives and the lives of those we cared most about (again, our kids) to be like as we started our next chapters. We both understood that the kids needed both of us involved in their lives. And we made it a point to make that happen.

Perhaps it’s an experience thing. My mother died when I was a little girl, and I remember how hard it was to grow up without her in my life. I also know how important my own father was to me, and I have no desire to deprive my children of theirs. They need their dad, and he needs his kids. Nothing that has happened between him and I can or should change that.

Making divorce easier is a matter of choice. Just because you can’t live together anymore, doesn’t mean you have to hate each other or go out of your way to make each other even more miserable than you already are. Understand that whatever happened between you is over and done with, and don’t create any kind of crossfire when you know your kids are the ones who will get caught in it.

Be the grownups that you are, figure out how you want your relationship to work from here on in, and then work to make it happen. Align yourself with that vision and then act as if it’s already that way.  Most of all, understand that it is hard for all of you, and have patience for all involved, including yourself.