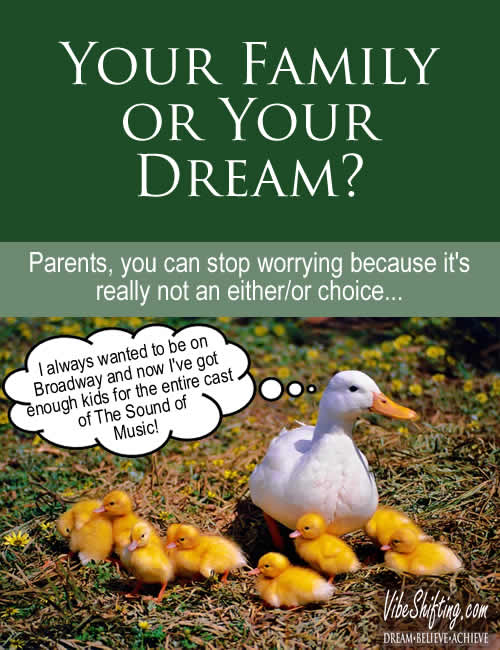 Today we’re talking about whether being a parent means giving up on your dreams. Many parents, especially mothers, struggle with this conflict and wonder if being a good parent and being there for your kids means that you have to let go of the dream that’s still in your heart. But do you really have to choose between the two? Does it really have to be your family or your dream?

At its core, this struggle is really a problem with assumptions. So often we assume that sacrifices must be made in order to be successful with our dreams, and that those sacrifices will adversely affect the people we care about most – especially our children.

Is your dream still the same?

These assumptions are especially rampant when we are in a situation where we regret not having taken chances or having seized opportunities that came by when we were younger, or where, for whatever other reasons, a long-held dream still hasn’t come true for us.

But one of the biggest issues with long-term dreams is that we sometimes get these blinders on – we cling to the original vision we once had, without ever updating it over time. We compare ourselves up against a standard that we had years, even decades ago, without ever stopping to think about whether or not that dream is still what we want today.

Getting clear about what you want

What I’m getting at here is the importance of clarity. The key is to get clear on what you really want in life. And part of this is assessing whether the dream you used to have is still the dream you want today, because so often we cling to an old dream out of nothing more than habit. Now, I’ve said before that dreams don’t die – and they don’t  — your dreams will always be with you. But they can, and do, evolve over time, right along with us.

So you have to be careful about saying things like “well, I always wanted to be an Olympic gold medalist, but now I’m 40 and have three kids so it will never happen”. And the reason you have to be careful with this is that at 40, do you really still want the exact same dream that you wanted at 18 or 20? Remember that Muhammad Ali quote: “The man who views the world at 50 the same as he did at 20 has wasted 30 years of his life.” This does not mean that you have to give up on your dream – not at all! But you need to assess whether the particulars of your dream have changed at all in the intervening years, as your experience and perspective on life has changed.

What you really want vs what you think you want

The reality is that you’re not likely to become the Olympic athlete you wanted to be at 16 if you’re starting from zero at 40 years old. But at the same time, at 40 it’s probably less about the allure and prestige of the Olympics now than it is about proving to yourself that you can do it. You may not make it to the Olympics at 40, but you CAN, absolutely, take up a sport for the first time at 40, get really good at it, and even win medals if that’s important to you.

They key here is that if you’re feeling like you have to give up your dream for your kids’ sakes, you need to get to the heart of what it is that you really want. In my new book, fearLESS: How to Conquer Your Fear, Stop Playing Small, and Start Living an Extraordinary Life You Love, I talk about the fact that what people think they want and what they really want are often two very different things. And a lot of the time, the struggles we have in this area are because we’ve lost touch or lost clarity about what our dream really is, or what is has become.

What does success mean to you?

So, for example, if you always wanted to be a rock star but figure there’s no way for it to happen now that you’re doing the soccer mom thing, the first thing to do is to sit down with yourself and get clear on what that really means because there a lot of different ways to be a rock star. You need to get clear on what “being a rock star” means TO YOU. Not to your mom or to your husband or to the 17 year old next door or to the people who track sales numbers for platinum records. You need to know what your own personal, very specific definition of “being a rock star” is.

If your dream is to perform live on stage with a band in front of tens of thousands of screaming fans, that’s a different view of “rock star” than someone who dreams of making a great living with her music while touching other people’s lives. And while that first definition does involve a lot of travel away from home and family that might not appeal to someone with small children, that second definition can be fulfilled in lots of ways that don’t involve missing out on those all-important soccer games. And if you understand that, a lot of the internal struggle and conflicted feelings get cleared up right away.

It doesn’t have to be your family OR your dream

Let’s a take another look at our rock star example: For a lot of parents who have aspirations in the performing arts or similar fields, one of the biggest things that concerns them is this prospect of being away from their kids for extended periods of time and missing out on special moments. There is an automatic assumption that in order to be a successful rock star, you’re going to have to be on the road a lot. But if you start to question those automatic assumptions, you start to see that maybe they’re not as valid as you originally believed.

This has never been truer than it is today. One of the biggest factors that puts so many people’s dreams within easier reach than they might think is the Internet. The Internet has opened up so many avenues of opportunity in so many fields it almost makes my head spin! In the Internet age, we can collaborate with like-minded people on the other side of the world at the click of a button, and what used to automatically require extended travel doesn’t necessarily have to anymore. A lot of stuff can now be accomplished virtually, in an online forum, without ever having to be away from home. And for our hypothetical rock star mom, this is huge.

If she just wants to perform, make money, and touch lives with her music, then maybe she could do it as a YouTube star, for instance. I just read a story about a 55 year old woman who makes over $100K a year through her YouTube channel where she teaches people how to crochet! She even gets recognized at craft shows now, where people routinely ask for her autograph and to be photographed with her. So, it can be done – it’s being done.

Thinking outside the box

Getting clarity on what your dream really is right now, at this point in your life, is so important because it so often dissolves that feeling or that fear that because you haven’t “made it” in the sense of what other people, or society, or even a younger you from 20 years ago, thinks “making it” means – when you realize that your current definition of success is different from what it used to be or what other people think it means – it can be very liberating. It takes a huge weight off your shoulders and allows you to start working on what really matters to you – unburdened by all those heavy “should’s” you didn’t even realize you were carrying around.

When all that weight is gone and you’re free to focus on what’s important and on what your dream is NOW, you’re much better able to then go out there and start making progress and making it happen.

So instead of despairing about all the reasons you believe that your dream can’t happen because of your family responsibilities, I’m going to challenge you to start getting creative with all the ways it COULD happen. You don’t have to pick your family or your dream! You just need to learn to think outside the box about what opportunities and avenues for success are available. And don’t limit yourself to what traditional success in your field used to look like, because these days, it can be so much more!