Intuitive Eating: Opting Out of the Food Wars 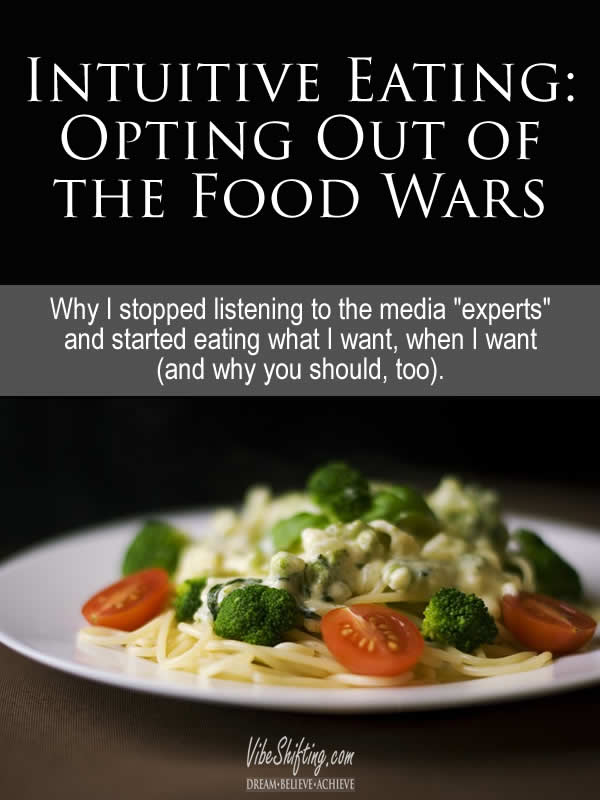 I was about twelve years old when I was diagnosed with anorexia. I was scandalized – all this work I’d done to lose all that horrible baby fat that made me “pleasantly plump”, and now I was being told that I had to stop dieting? I was even being threatened: if I didn’t start gaining weight I was going to be sent to the hospital. Well, we’d just see about that.

A matter of control

I got pretty crafty. When a doctor’s appointment was looming on the horizon, I’d grudgingly allow myself to gain the minimum pounds needed to ward off a referral to the in-patient eating disorders clinic, but as soon as I walked out of that building, I ate nothing in order to lose it all again as quickly as possible.

I was proud of the fact that I only ate once a day. #dieting #anorexia #nomorediets Click To Tweet

I was proud of the fact that I only ate once a day. And there were days when even that one sad excuse for a meal didn’t happen. In hindsight, food was a control thing for me. There were awful things happening in my life at that time, and I guess that my food intake was the only thing I had any power over.

The pressure to diet

This struggle with dieting, control, and body-image would last for the next five years. Ever since then, I’ve had issues with diets. I hate them. I refuse to have anything to do with them. I think they’re the worst possible thing that anyone could ever do to themselves. They not only mess up your body, they mess up your mind.

But the pressure to diet is everywhere – especially for women. Sometime I still get twinges from those days: How the hell do all these celebrity women manage to have babies and still have rock star bodies? Seriously… does cellulite just not exist in Hollywood, dammit?

The “right” way to eat

Add to that, the endless bombardment of different diet plans out there and the hordes of die-hard adherents who all shrilly insist that everyone should be eating according to whatever diet they happen to be on themselves because theirs is the way that ALL human were MEANT to eat.

Worse yet, every single diet out there seems to have scads of anecdotal stories backing up its shining claims, and every single diet seems to have (some amount of) actual research behind it. The vegans insist we should all ditch meat, the paleo people think we should eat lots of meat, the keto people think fat is the way to go, the Mediterranean folk want us to eat more fish, and the grain-brainers want us to give up our toast. Everybody these days seems to hate gluten (even though it’s harmless to most people) and anything involving carbs. And let’s not forget that, apparently, all natural sugar is now Evil Incarnate and we should all be using substitutes (?!).

If you listen to the media, the only thing left to eat anymore is lettuce. #dieting Click To Tweet

What’s a girl to do when faced with such contradictory information? If you listen to every soap-box howler out there, about the only thing that’s safe to eat anymore is lettuce (as long as it’s organic and locally grown, of course).

All of this was actually causing me a great deal of anxiety. Is the dairy causing the acne breakouts? Is the wheat causing weight gain? Is this chicken going to be the tipping point to environmental disaster? Is the arsenic in this rice going to kill me before the pesticides on the kale or the oxalates in the almond flour do?

And then I realized that stressing myself out over food was stupid. I was being drawn back into the whole mentality that had spawned my childhood eating disorder once again. I was starting to fear everything I ate, which was really not a good vibe to be in.

Recently, I just got fed up with the whole thing. I’m tired of worrying about what I eat. I’m tired of being afraid of everything I ingest. I’m tired of people telling me what they think I should and should not be eating. I am so tired of seeing the food that I eat, or don’t eat, as a battle for dominance over my own body.

Tired of fearing food & meals being battles for dominance over your own body? #intuitiveeating Click To Tweet

When I was dieting as a child, my very concerned French-Canadian grandmother came to me once and said that some of the greatest pleasures of life were good food and good company with which to enjoy it. And that’s what I want food to be again; I want to go back to seeing it as something positive, enjoyable, fun, and even creative.

So now I’m trying to leave the whole dieting industry behind. I try to eat what I want, when I want; I try to enjoy what I eat, and to not care what anyone else says about it. It’s called intuitive eating, and it’s about learning to listen to your body and not to the media, or the endless stream of “clean eating” gurus that keep popping up, or to the opinions of everyone and their Uncle Bob, who all think they know the “right” way for people to eat.

I’ve decided that the right way to eat is simply this: to eat what makes you feel good, inside and out. And above all, to enjoy and be grateful for whatever it is that you choose to eat, without fear and without guilt.