How Should Can Make You Sick 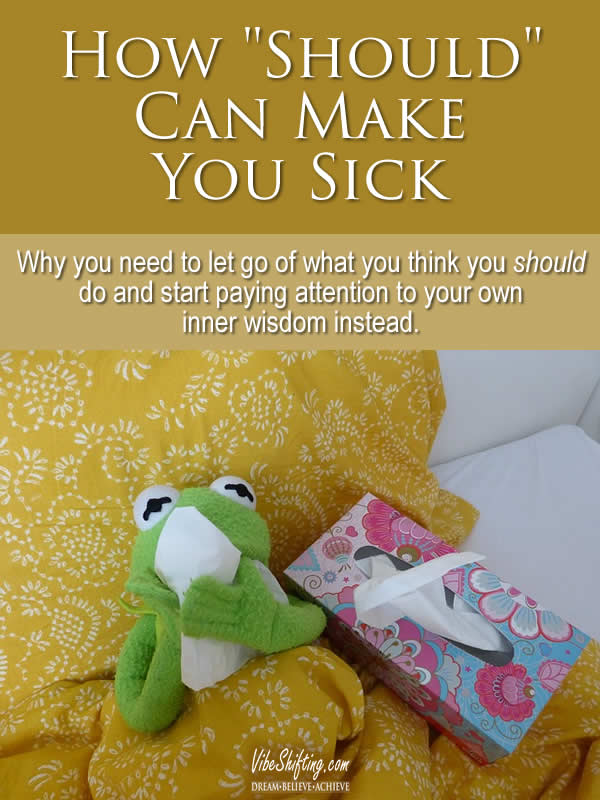 They say that those who don’t learn from history are doomed to repeat it. When it comes to the “big” lessons that we need to learn this statement is so true. If we don’t learn what we need to from the experiences we have in life, the Universe will oh-so-helpfully keep repeating them for us until we do.

A question of alignment

In my case, such lessons usually involve illness. Most recently, my diagnosis of pneumonia, which flattened me for four full weeks, brought me back to a lesson I apparently still haven’t learned.  I talk a lot about how “should” is a bad thing, and there’s a reason for that. “Should” means you’re not aligned with whatever it is that you’re feeling “should-ish” about.

Should means you don’t really want to.

Not wanting to means you’re not aligned with it.

If there’s a lot of ‘should’ in what you do, you’ve got an #alignment issue. Click To Tweet

It means that, perhaps, there is another avenue of possibility that could be better for you; something else that could be more helpful for you to do instead.

And yet, the “should” asserts itself anyway, overriding that inner wisdom and pushing us down a dangerous path

Sometimes, you really do need a break

The thing is, sometimes we need a break; a vacation or a change of pace and scenery. We just need to not be doing what we usually do for a while.

But we don’t give ourselves that needed time off because we “should” be more productive than we are; because we have important things that “should” be done.

Because other people have become far more successful than we have, in far shorter timeframes, so we “should” get our act together and make things happen, even if we don’t yet know how. We think that we “should” be further ahead than we currently happen to be and that, therefore, we don’t deserve time off.

Or maybe it’s that we’re afraid of what other people will think or say if we pause; perhaps we’re worried that they will think we’re lazy or not working hard enough to be successful; we fear the “I told you so” smugness of the people that we think expect us to fail.

Or perhaps we do give ourselves the tiniest of breaks, but we don’t allow ourselves to actually enjoy it – we don’t actually let ourselves turn all that stuff off. We spend the time berating ourselves for not doing more. We’re thinking about what we “should” be doing rather than decompressing and de-connecting from it all, which means our tiny little break isn’t actually a break at all.

We’re so caught up in our “shoulds” that we tell ourselves that we can’t let go without a truly valid reason.

So the Universe obliges.

It gives us a very valid reason to take that time off and time away – it makes us sick so that we have no choice but to stop.

Learn to listen to your #InnerWisdom before you manifest an #illness that forces you to. Click To Tweet

The sad thing is that it’s almost a relief; if we have a real, possibly even serious, illness with a doctor’s confirmation and medical tests and antibiotics to PROVE that we need to rest, only then will we allow ourselves that time to shut down.

Only then will we allow ourselves the self-care that could have prevented the illness in the first place.

In short, should can make you sick if you don’t pay attention to it.

So listen to your inner wisdom; if you’re finding a lot of “shoulds” in your thinking, it’s a sign that you need check your alignment. It’s a sign that you need to slow down and reconnect with what it is that you really want in life; to remember your why and to align yourself with what’s really important to you before the Universe hands you an unarguable excuse for avoiding those “shoulds” that you didn’t really want in the first place.