1802 Parallel Realities in Your Real Life 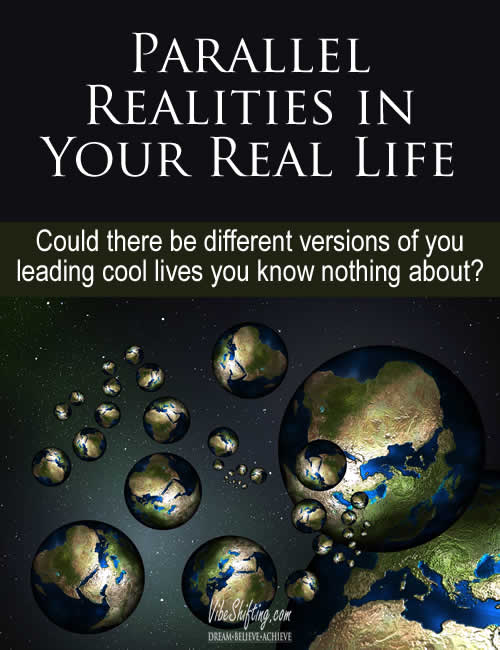 One of the more interesting aspects of quantum physics is the theory of the multiverse, or parallel realities in which different versions of ourselves could exist, all of whom could be leading lives of their own that we know nothing about. In today’s podcast episode, we’re chatting with guest expert Joanna Hennon about how this theory impacts our real lives.

In part two of our interview, which airs next week, we’ll be talking about the disconcerting personal experience with a sudden shift in her physical reality that first got Joanna interested in these parallel realities, and about how you can access and use the information you get from them to draw more success into your current reality.

Nathalie: Welcome back everyone to The Vibe Shifting Show! I have another special guest for you today. We’re talking with Joanna Hennon.

Joanna is a Soul Smart Success Mentor. She helps people to easily create more success by using the wisdom and power we all have access to at soul level. Joanna believes that living life from a place of soul power in tune with your higher self and your guides, and using the Law of Attraction with intention will literally change your life. Welcome Joanna. I’m so excited to have you here today!

Joanna: Thanks for having me! I’m really excited to talk to you.

How do parallel realities impact your daily life? Find out in this #podcast episode! #LawOfAttraction Click To Tweet

Nathalie: I know! We’ve sort of known each other online for a while now, haven’t we?

Joanna: Yeah, I think it’s a couple of years.

Nathalie: This is, I think, the first time we’ve ever actually had a conversation, a live conversation.

Joanna: That’s true! I think I wrote a blog post, a guest blog post for you a few years ago.

Nathalie: You did. You wrote an awesome post about…

Nathalie: Yes, you did. We still have people poking through and reading that one. That was quite a while ago, too, wasn’t it?

Nathalie: Yeah. So I am super-excited because you… you do so many really interesting things. You use the Law of Attraction concepts but you do it from a very soul-centered kind of place, which I think is really interesting.

Joanna: Interesting, yes. That’s one way of putting it. I tend to get guided to stranger and stranger directions, which is great. I love exploring soul power, soul wisdom, anything spiritual and, really, learning to use it here in the physical space. So…

Nathalie: And you actually do the channeling stuff, right?

Joanna: I do! I do do the channeling stuff.

Nathalie: We are going to have to have you back at some point just to talk specifically about that because I’ve always had so many questions about that whole experience.

The Intersection of LOA and Quantum Physics

Nathalie: Which… Sorry, go on.

Joanna: No I’m just gonna say, that’s one of my favorite things to talk about so I’m really happy to be here.

Parallel realities and infinite #possibilities: how to use the energy of super-successful you to improve your current life. #LOA Click To Tweet

Nathalie: Well, I love this concept because it ties in two of my favorite things, which is this whole soul-centered, Law of Attraction… Using that, I don’t know… some people call it the “woo-woo” stuff… but in a very practical way.

And it also ties in a very sort of scientific, quantum physics, cutting edge kind of stuff, too. Now when we talk about parallel realities, what is a parallel reality, first of all? Can we have just a basic definition of that?

Joanna: Oh I don’t know if you can have a basic definition of that!

Nathalie: From your perspective, the way you work with it.

Nathalie: …how do we use this stuff to help make our lives easier or better? So, from that perspective, how would you define a parallel reality? 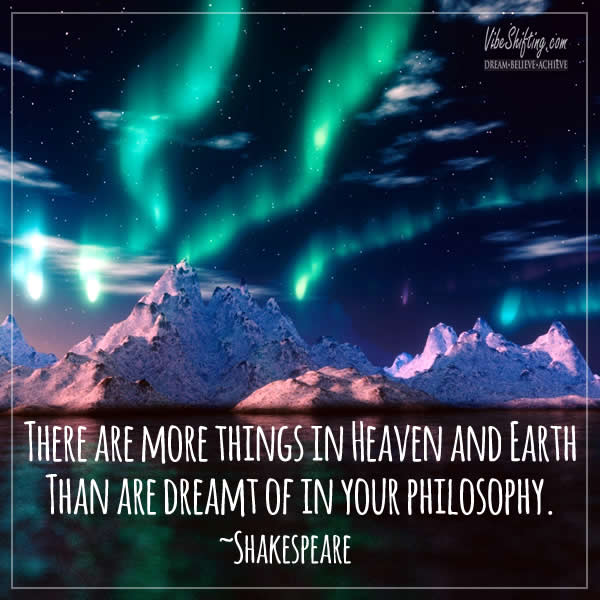 A Matter of Infinite Probabilities

Nathalie: It was a book.

Joanna: It was a book.

Nathalie: It was Mike Dooley’s book.

Joanna: That’s right, it was Mike Dooley’s book. But just the concept of infinite possibilities, of “anything is possible”, we can create whatever we want, that kind of thing.

So perhaps I couldn’t take Donald Trump’s place as President of the United States, right? But…

Nathalie: Neither could I because neither of us were actually born in the U.S. But, you know…

Joanna: But that’s right! Right? So they’re not entirely infinite possibilities for everybody, but we each have a whole range of possibilities including the highest potential ones.

And so when we find that we yearn for something or we dream of becoming something, those things aren’t just dreams – they’re actual possibilities that you, in this lifetime, can achieve, can experience.

'When you dream of becoming something, that’s not just a dream, it’s an actual possibility that you, in this lifetime, can achieve.' #ParallelRealities #LawOfAttraction Click To Tweet

Nathalie: Like a trickle through of energy from one of those alternate realities. Now, I think when we start talking about this stuff… I’m just going to do just a little bit of the technical stuff here because when I look at the stuff that you do within this realm, I think of it in more of the structure of a fractal tree with branches coming off, infinitely.

Joanna: It’s like sliding doors. Have you seen that movie?

Nathalie: No I haven’t seen that one. I think of the… Sliders, that show from the 90s.

The Doctor Who Example

Nathalie: But there was also a Doctor Who episode about this, actually. With the, the one… Doctor Who Number Ten… the one everybody loves the most. The name escapes me at the moment. How can his name escape me? David Tennant!

Nathalie: Oh, you don’t watch Doctor Who. Well, this episode would interest you because it was this concept of this one woman, one of his companions. The doctor always has companions, right? So he travels with this one lady. And it looked at her life and one decision that she made at one point in her past that had repercussions throughout the entire universe. She turned left or she turned right. And one leads to her meeting the Doctor, one leads to her getting a desk job.

So for most of these parallel realities, the theory goes, they’re pretty muchthe same as they are now, there’s very little difference in our lives because whether I took the elevator today or took the stairs or whatever, that’s not going to have huge… Normally that wouldn’t have huge repercussions in your life, right? But some decisions do. 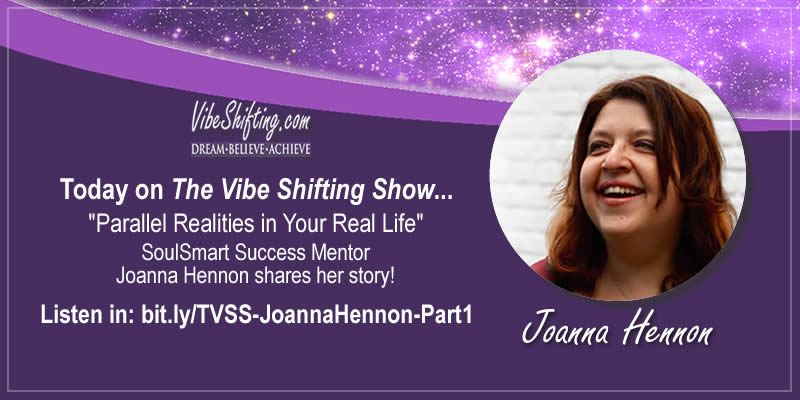 Nathalie: And in the concept of parallel realities there’s this theory that you could… this is less the physics stuff but more in terms of the LOA stuff… there was this guy who used to do this quantum jumping stuff… What was his name? Goldman? Bachman?

Joanna: Yeah, that’s right! There was. I remember coming across that a really long time ago, actually, and kind of not doing anything with it. And, yeah…

Nathalie: But his view was that somewhere along the way, in one of these realities, you became this incredibly successful…

Everything that you’re dreaming of and wishing of and hoping or wishing that your life could have been, in some plane it’s happened. And you can access the information from that plane to help you in this one and that’s sort of like what you do with it, right?

All Possibilities Exist, All At Once

Joanna: Yeah, that’s actually really similar except that I kind of think of all the possibilities as existing. And I take the physics explanation of something only becoming real, or taking on a form, or kind of choosing…

Joanna: All of them exist and it’s like all you need to do is zoom out of this reality and zoom back in on the one you want.

‘All realities exist, and all you need to do is zoom out of this reality and zoom back in on the one you want.’ A #podcast interview with #success mentor Joanna Hennon! Click To Tweet

Bridging the Gap Between What Is and What You Want

Joanna: Yeah, I really like that zooming out and in way of looking at it. And although we talk about zooming in on the one you want and then bridging the gap, because for me that’s the most important bit. Everything else is interesting, but that’s about it.

As you mentioned before, I’m most interested in what we can use to create more success for ourselves, to have better lives. So for me, we can go… we can zoom in on the other reality and notice what the super successful you is doing and then you do more of that. Bring more of her energy into our present day. So then we bridge the gap.

Things like, if you were sure that you saved your document but then you didn’t. Or you were sure your keys were right here, but then they’re not there, but they appear again. These things we kind of… we put down to not remembering, or whatever, but in fact we’re kind of, we’re shifting back and forth between these very similar realities.

Explaining Reality with What We Already Know

Nathalie: You know there’s interesting theories about that, too. About how we… Things like that happen and our brains just kind of create explanations based on what we’ve been taught to expect. So it’s not that they’ve actually shifted… What our brain tells us is it’s not that they suddenly appeared out of nowhere or shifted through from another reality, it’s that well, we obviously didn’t notice those keys sitting there even though we checked, like, five times.

Nathalie: They had to have been there! Even though we checked and they weren’t.

Joanna: Yeah you did, right?

And that’s the thing, though. Most people won’t have the theory of parallel realities as something to call on as, you know, something outside of Buffy, you know. So it’s just… it’s not even an option. It’s not like your brain rejects that option, your brain has to explain things based on what it knows.

Nathalie: What it knows. What it understands.

This has been part one of my interview with Soul Smart Success Mentor, Joanna Hennon. Be sure to tune in next week for part two of our interview in which Joanna shares her personal experience with a reality shift and shows us how to use the clues we get from parallel reality visualization exercises to improve our current realities! 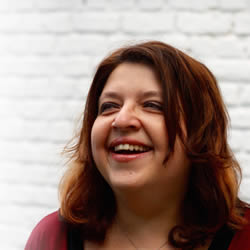 Joanna is a #SoulSmart Success Mentor. She helps people to easily create more success  by using the wisdom and power we all have access to at soul level. Living life from a place of soul power, in tune with your higher self and your Guides, and using the Law of Attraction with intention will literally change your life! To get started, get her free workshop on working with the Super Successful version of you.