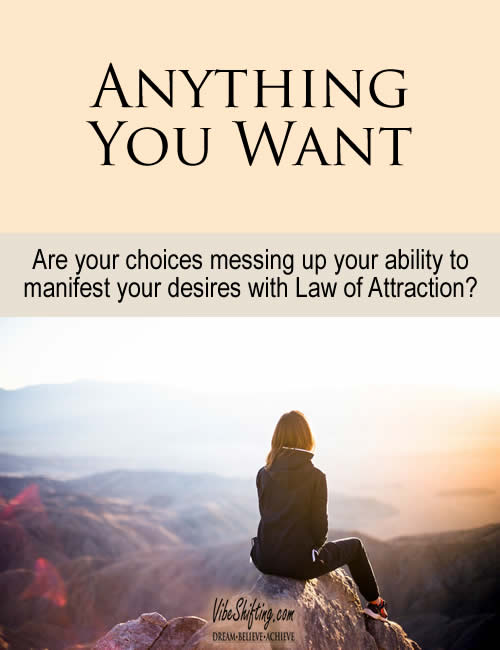 Today on The Vibe Shifting Show we are talking about focus, The Neverending Story, the paradox of choice, and this very questionable idea that Law of Attraction is all about getting anything you want.

So I’m going to start this off by telling you that I’ve been having trouble sleeping lately. Now that, in and of itself, is nothing new – I’m the Insomnia Queen and have had trouble sleeping for as long as I can remember. What’s different about it this time is that, in all the exhausted tossing and turning that I’ve been doing, there’s a question that keeps tumbling through my mind. Over and over again, the same question echoes: “What do you want?”

What do you want?

Because on the surface the question seems simple, but if you dig just a little bit it makes no sense. It’s too big, too broad; it encompasses too much. I’ve been thinking about this a lot lately. And I think that this very question is part of the reason so many of us run into problems when we start trying to consciously apply Law of Attraction principles in our lives.

And some people think that Law of Attraction is just that. That it’s all about getting anything you want. It’s an easy conclusion to draw, I suppose. From author Barbel Mohr’s concept of “cosmic ordering” to analogies comparing the Universe to a giant vending machine or a radio that you just have to tune to the right frequency, all our ways of talking about LOA seem to tell us that we can get anything we want from the machine if we can just figure out how to punch the right code into the damned thing.

I think the real problem we run into with the conscious application of LOA is not so much lack of alignment or that we’ve put “the wrong code in the machine”, it’s the fact that most of us have no idea what it is that we really want. The problem is that we automatically associate “anything” with “everything”.  This is not an alignment issue because you can’t even begin to get aligned with what you want if you don’t even know what you want. It’s a clarity issue rather than an alignment issue.

In thinking that we can have anything we want, what often happens is we start getting lost in the overwhelming possibilities and things start to go wrong precisely because of the system overload resulting from too many choices.

In his book The Paradox of Choice, author Barry Schwartz says that living in an abundance-minded society gives us too many choices and has the counter-intuitive effect of causing significant psychological distress. He even claims that our having too many choices in life is a prime cause of depression in the modern world. These findings, incidentally, are mirrored in many psychology studies that show a “choice overload effect” where too many options actually decreases people’s motivation to make choices and also lowers their satisfaction with the choice they do end up making.

In other words, that thorny issue of “everything” causes havoc in the system because if we think we can have anything we want, we often get mired in analysis paralysis and that whole fear-of-missing-out thing – how do you choose what you want when absolutely anything can be yours?

You get so worried about choosing the wrong thing that you hesitate to choose anything at all. It’s like the kid who gets so many presents on Christmas morning that he can’t decide which one to play with first, so he ends up not playing with any of them because he’s just so overwhelmed.

All at Once or In Sequence?

Now, I’m not saying that you can’t have everything you want. What I’m saying is that, if you’re having problems getting results with your deliberate attempts at using LOA, it might help to prioritize your desires a little.

The problem here is that, in looking at the concept of “everything”, we automatically gravitate towards “everything all at once”, rather than “everything, but in sequence”. Think of it as the difference between a massive pile of Lego dumped all over your floor, and using those random pieces to actually build something.

What You Really and Truly Want

Here’s another example for you: In the second half of Michael Ende’s classic novel The Neverending Story, after Bastian successfully saves the magical land of Fantastica from the terrible Nothing, the Childlike Empress rewards Bastian with a special gem on which is inscribed the words: “DO WHAT YOU WISH”. Bastian tells his lion friend that this must mean he can do anything he feels like.

Confused, Bastian asks the lion how he can figure out what he really and truly wants if it’s a secret hidden even from himself. The lion then tells him that he can do so by following his wishes, “from one to another, from first to last”. But he cautions Bastian that this is the most dangerous of all journeys because there is no other journey on which it is so easy to “lose yourself forever”.

The danger, you see, is in losing yourself in the pursuit of your wishes themselves without completing the journey that is leading you to what you want most. What you want now is a breadcrumb, leading you to your next desire, and then the next and the next, until you uncover what is at the heart of them all, the golden thread that ties them all together. 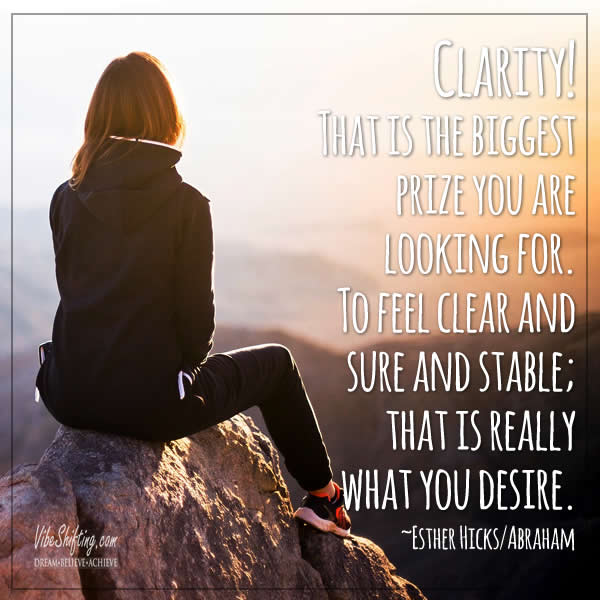 So, all those things that you want – or think you want – they’re all fine. And you can have them. But you need to stop trying to manifest them ALL, all at once. That’s where the confusion is coming in. We get scared that if we aren’t focusing on all the things and experiences we want, we won’t be able to get the ones we aren’t focusing on. We then scatter our energy all over the place trying to focus on too many things. The reality is that you can have all those desires, but focusing on one at a time is easier than trying to do everything at once.

Focus is Critical to Getting Results

In one of my books – can’t remember which one at the moment – I used the analogy of a piece of paper lying in the sun versus focusing that sunbeam onto the paper through a magnifying glass. The former will produce a warm piece of paper, but the second will ignite that paper into flames. Focus, in other words, is critical to getting results.

It’s like being a writer. As a writer, you have all sorts of book ideas running around in your head, and you want to work on all of them because they’re all just so cool. But if you’re constantly flitting around from idea A to idea B and idea C and back again, you’re never going to complete any of them. Far better it is to focus on getting idea A written out THEN moving on to idea B, and so on, in sequence. Furthermore, as you finish one book, you almost always find that it generates a whole bunch of new book ideas to add to your list!

You Create Your Path

This is why I think it’s important to be open to new desires, and why I say that there will always be a new desire and a new dream. Once you’ve achieved one dream, there’s supposed to be another. Again, these are your breadcrumbs, your trail, your journey, your path. Just like the lion in The Neverending Story said: Follow your desires or your dreams from one to the other as they reveal themselves to you.

And that’s the real secret in all of this: “as they reveal themselves to you”. Your path is never going to be laid out in front of you in its entirety. The path unfolds before you as you move forward. Even as you walk your path you are creating it, one step at a time.

Becoming Who You Want to Be

Your wishes, the individual desires themselves, are not the endpoint. They are leading you to something else. And each wish, in its fulfillment, teaches you something about yourself or pushes you to develop something within yourself. Each desire builds upon the last and they all work together to turn you into something more than you were before.

The point in all of this is that it has never been about getting anything you want. It has always been about becoming who you want to be.