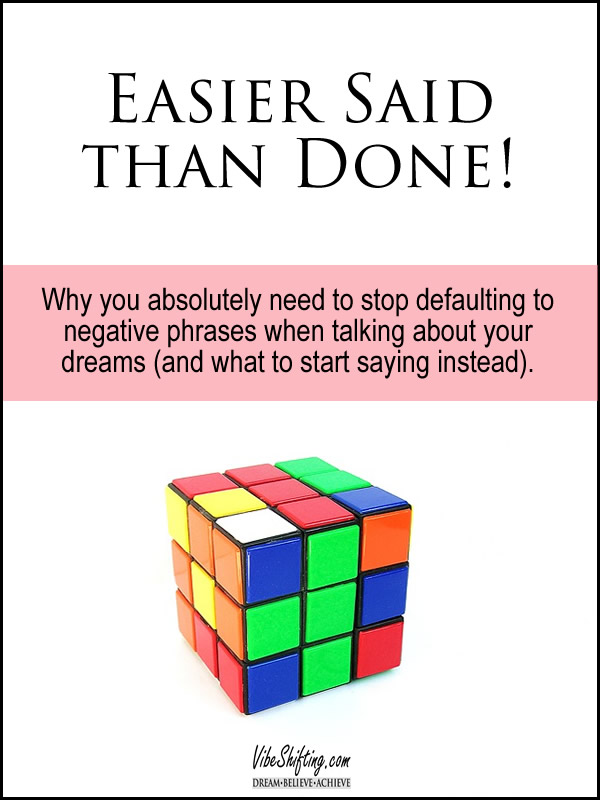 Have you ever seen something written somewhere, or had someone give you a piece of advice that you know would be helpful, but your instant response was: easier said than done! It’s something that I used to catch myself doing fairly often in the past, until I realized just how counterproductive it really was.

“But it’s just a phrase!” you’re saying “It doesn’t really mean anything!”

But think about it. If you’re trying to build big dreams and amazing things in your life, “ easier said than done ” is not the kind of mindset you want to get yourself stuck in! It’s little thoughts like this that end up negatively colouring our entire worldview and programming our subconscious minds into believing that what we want is impossible.

It’s about your subconscious beliefs

In short, when you keep defaulting to negative phrases like that, you’re reinforcing a subconscious belief that what you want is hard; you’re training yourself to expect difficulties and roadblocks and problems of all sorts.

And what you’re focused on is what you tend to bring into your life. In other words – expect to encounter problems, and you will; expect that achieving your goal is going to be really hard, and it will be; expect that your dream is impossible to reach… and you’ll never get there.

Worse still, when you start to believe in your heart of hearts that something you very much want in life is very much out of reach and you’ll give up trying to get there. You can’t keep up your motivation and determination to succeed if you don’t think there’s any point to it – that there will never be a reward for your efforts.

What path will you choose?

When you default to “easier said than done”, you’re opting for the path of least resistance and will find yourself on the road to mediocrity and broken dreams.

Why not choose the other path instead? The one that says your dreams are possible and that you will get there? Why not start cementing in the subconscious belief that says “where there’s a will, there’s a way”?

Start training yourself to look for and work for the positive in life. Start moving towards that dream and focus on what you CAN do, today, to bring yourself even the tiniest bit closer to your dream (and there is always something that you can do). Just start moving and let inertia work its magic on your behalf. (And object in motion tends to stay in motion, after all!)

And start changing your automatic response patterns when possibilities open themselves up to you.

I’ve picked up a new mantra lately – it’s a phrase that guest writer Joanna Hennon used in response to a comment about her post on connecting with your spirit guides, and she said: “It’s just as easy done as said.”

Give it a try. Next time you think of some daring action you could take to help build your biggest dream, instead of getting scared about it, tell yourself that it’s just as easy done as said. It’s a much better mindset to get yourself stuck in…