Building the Foundations of Your Dream 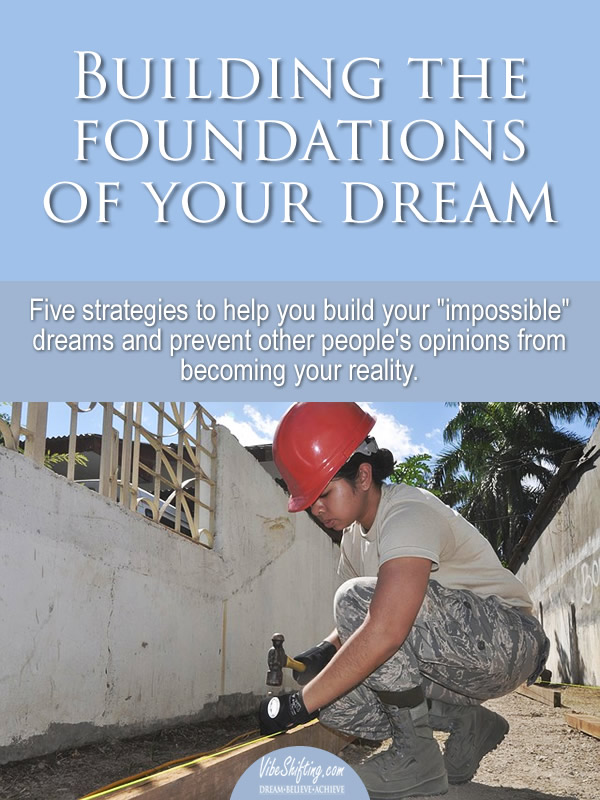 Has anyone ever told you that you’re flighty? Do people tell you that you’ve got your head in the clouds or that you need to stop dreaming and start paying attention to reality? Have you ever been told that it’s childish to concentrate yourself on the impossible when there are so many more pressing concerns in daily life?

You see things and you say: “Why?” But I dream of things that never were, and I say: “Why not?” ~George Bernard Shaw

Sucks, doesn’t it? It makes you feel bad. And it makes you doubt yourself. And wonder if there’s something wrong with you because you see what could be and want to create it, when other people see what is and assume that’s the way it always will be. You get people telling you that you’re being ridiculous often enough and you start to believe it yourself.

Dreams are the beginning of everything

But the thing is that they’re all wrong. All of those people who tell you that your dreams are unimportant or impossible – every last one of them is wrong. Dreams are more important than any of those people will ever understand, because dreams are like seeds. They are the beginning of everything new that has ever or will ever be created.

Dreams are like seeds; they are the beginning of everything new that has ever or will ever be created. (Tweet this!)

Everything begins with a dream. Every new method of doing things, every scientific advance, every artistic triumph… none of these things exist in a vacuum. They don’t just pop into existence out of thin air – they start as an idea and a dream in someone’s mind.

The thing with dreams, though, is that they are just that – dreams – until they are created in reality. They are like the architectural blueprints for a building; just a potential until you start pounding wood and nails together and pouring concrete. The dream is the vision, but in order to live it, you must build it.

The foundations of your dream

I’ve talked at length about the importance of taking action to turn a dream into reality. This is because action is the catalyst that most easily allows the Universe to line up all its magic for you. When you’re moving – that’s when you start finding all those “coincidences” and synchronicities throwing themselves your way. Your actions, in effect, are the foundations of your dream.

If you have built castles in the air, your work need not be lost; that is where they should be. Now put foundations under them. ~Henry David Thoreau

In order to start building those foundations and start kicking things into serendipitous motion, here’s the five-step crash course:

1. Hold the vision. Focus yourself on your vision. Get clear on what you want this dream to look like and use this vision as your motivation and compass point to keep you going in the right direction.

2. Map your milestones. Take a good look at that grand vision and decide what the major milestones are that need to happen in order for the dream to be realized. Figure out a logical order for the really big steps along your way.

4. Break it down. Once you’ve identified your milestones and gap areas, start reverse-engineering your success. In order to meet each milestone or to secure the skills, contacts, or resources that you will need, what has to happen? What action steps (e.g. networking, research, outsourcing, content creation, etc.) will you need to take in order for each milestone to be realized?

5. Just do it! Break your action steps into smaller and smaller chunks until you have simple tasks that you can accomplish, and then start doing them! Post your baby-step action items for your first milestone on the wall where you’ll see them often so they’ll motivate you do get them done. Pick one item to do TODAY and get it done!

Never let anyone else’s opinion about what is and is not possible become your reality. Your dreams are not impossible. And they’re definitely not ridiculous. In reality, your dreams could be the start of something that could absolutely change your world. Without dreams, nothing changes, nothing grows, nothing evolves into anything more. So dream. Dream big. Build those castles in the air!

Just remember to put foundations under them and start building, too…