There Is No Try: Do or Do Not 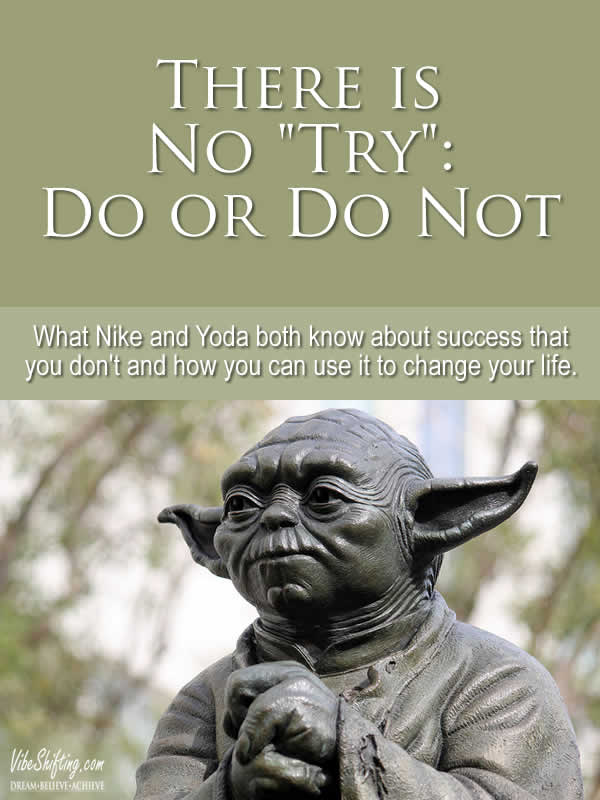 The title of today’s post, of course, comes from the quote by Yoda, the great Jedi Master himself. It’s from that scene in The Empire Strikes Back where Luke has crashed his ship into the swamp on Degobah, and he’s standing on the edge of the swamp trying to figure out what to do about it and Yoda tells him to use the Force to get his ship out. Luke hesitantly says “All right…I’ll try…” and Yoda immediately snaps “No! Try not. Do or do not. There is no try.”

In other words, if you want something badly enough you’ll find a way; otherwise, you’ll find an excuse. If you have a dream that’s close to your heart you form it into an actionable goal, and then you’ve got to be willing to do what needs to be done in order to get it done. DO it. Don’t TRY to do it. (A difference there is, hmm?)

If you really want to make something happen you have to commit to it, big time. If you want to achieve your goals, then take a page from Nike and “just do it”! Make a promise to yourself that, come hell or high water, you WILL make it happen. And then get moving. Whatever you do, don’t tell yourself: “I’ll try.” Trying is great for things that aren’t that important to you; for instance, when you want to venture out into new areas like trying new types of cuisine, or trying a new activity that isn’t particularly important to you. But trying has no place when it comes to going after your biggest dreams and goals.

Why There is No Try

“I’ll try” is a self-protecting phrase that gives you an “out” or an escape clause “in case” it doesn’t work. It’s like giving yourself permission to lay the blame at someone else’s feet if you “try” and then fail, because if you tried, then it must have been “too hard”, or someone else didn’t “do their part”, or whatever. It’s an attempt to save yourself the pain of having to face the fact that if you failed it was because you didn’t make it happen. But the words themselves imply and assume imminent defeat, and they show that you lack the confidence and the will to put forth the necessary effort to make it happen. They are a big clue that your focus is on failure rather than success. And what you focus on is what you tend to bring about.

'I'll try' assumes defeat. Don't set yourself up for failure; decide that you WILL make it happen! Click To Tweet

But if you realize that you really do want it then don’t give yourself that back door of “try”. If you decide you want to follow a dream, then decide already and commit like crazy to making it happen! I AM. I WILL. I CAN. These are your power mantras – use them, and feel the energy and vibrational boost it gives you, just by changing your words. Your words are tied to your thoughts, and your thoughts create your world. Change your words and it will change your thoughts, your beliefs and, therefore, your world.

Get clear about what you want, and believe in your own ability to make it happen. Trust yourself and trust the Universe! Do you remember what happens right after Yoda lifts the ship out of the swamp with the Force? Luke says “I don’t believe it!” And Yoda, wisest of Jedi Masters, replies: “That is why you fail.” So BELIEVE… and then DO. There is no try.