When Are You Too Old to Build Your Dreams? 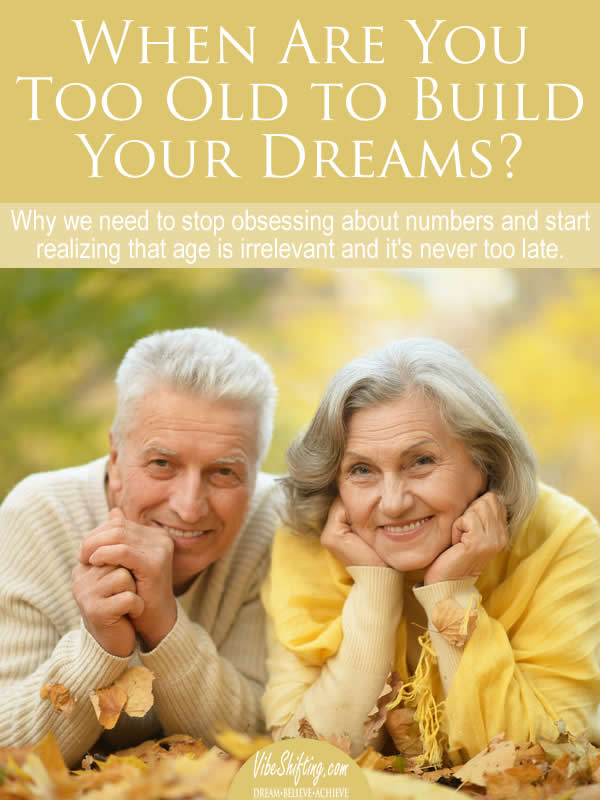 Is it ever too late to achieve a big goal or make a dream come true? When are you too old to build your dreams? An awesome reader left a comment on last week’s setbacks post that touched on something I feel very strongly about. He felt that age does play a factor in our ability to build our dreams and that older people should adjust their goals to take into account the limits of their lifespan. Specifically, he says:

While I generally agree on not letting other people make you feel your age limits your dreams, there are certain circumstances of age that do need to be taken into consideration on building dreams and what kinds of dream. It is like a one legged man determined he will regrow the leg that is missing. Probably not. Now he might get an artificial prosthetic, but an original leg, not without a lot more scientific breakthroughs than we already have. In the same manner a 90 year old probably needs to adjust some on dream building, like “In the next 40 years I will achieve such and such” Probably not.

Focus on possibility rather than fear

So here’s my take on this: When I first read this comment, I thought “Why are you focusing on the fact that at 90, you’re not going to last another 40 years?” Stop focusing on the scary or negative aspects of a situation and focus on the joyful, positive things, instead. Align yourself with possibility rather than fear.

If you’re 90, you’re probably not going to launch a new career as first soprano with the national opera company, but that doesn’t mean that you can’t start singing opera if that’s the dream that’s in your heart. If you’re still healthy and active, you absolutely can still get involved with your local musical theatre company and start singing in front of an audience for the first time.

It’s about what you CAN do

And that’s just off the top of my head. The point is you CAN do a whole lot of stuff to build your dreams or achieve your goals as an older person… but only if you stop focusing on all the stuff you CAN’T do and stop spending your days counting your remaining breaths.

The nature of the dream

Yes, it’s true that someone who is 70 or 80 or 90 is not going to become the Olympic athlete that they dreamed of being when they were 18. But the thing to keep in mind is that most 90 year olds have changed and grown over the course of the years such that the dreams they once had when they were 20 or 30 no longer interest them.

And this shift in focus is completely normal — your dreams are supposed to grow and change with you, and what was desperately important to you twenty years ago may no longer hold any interest for you whatsoever, while other things that you’d never considered back then suddenly are very important to you.

Fixing our attitudes about aging

I think the biggest problem that we have with aging is that we have a problem with aging. For the love of all that is, why do we do that? Why do we make age such a big freaking deal? Age is just a number. Nothing more.

But the more you fear it and dread it, the more problems you’re going to have with it. The biggest consideration that age has on our dreams is attitude. As with all things, when you stop believing you can do it… you almost certainly won’t.

Nobody grows old merely by living a number of years. We grow old by deserting our ideals. Years may wrinkle the skin, but to give up enthusiasm wrinkles the soul. ~Samuel Ullman

Beyond attitude, the next biggest impact on people’s ability to achieve their dreams is health. And if you can take care of yourself and stay healthy, then there is no reason why your age should have any bearing on your ability to make your current dreams a reality for yourself.

There is no reason why your #age should prevent you from building your #dreams! Click To Tweet

I personally knew a woman who was playing tennis every week into her 80s. And I’ve seen interviews with body builders and marathon runners who didn’t start in their fields until they were in their 50s or 60s.

Your life is yours to live, right up until you give up doing so. This is one of the things that drives me absolutely batty about retirement homes… all those people with so many stories, so much experience, so much expertise, so much wisdom… and they’re all sitting around waiting to die because that’s what old people are expected to do, and it’s what they expect of themselves. And it’s heartbreaking.

Don’t go there! Stay true to yourself and to your dreams. And know that whatever it is, there’s a way to do it. If you’re in that older age-group category (whatever that means to you), and you’ve decided that one or more of your dreams are impossible, then reconnect with your why, and reconnect with your touchstones. Get to the core of what your dream really is… and then get creative. Above all, remember that it is never too late — even if you do happen to be living in a retirement home!

Get to the core of what your dream really is, and then get creative! It’s never too late. Click To Tweet

Now I want to know what YOU think: are you or someone you know second-guessing your ability to succeed based on other people telling you that you’re “too old” to do it? Do you believe that “old” people need to give up on their dreams and be more realistic? Sound off in the comments below!