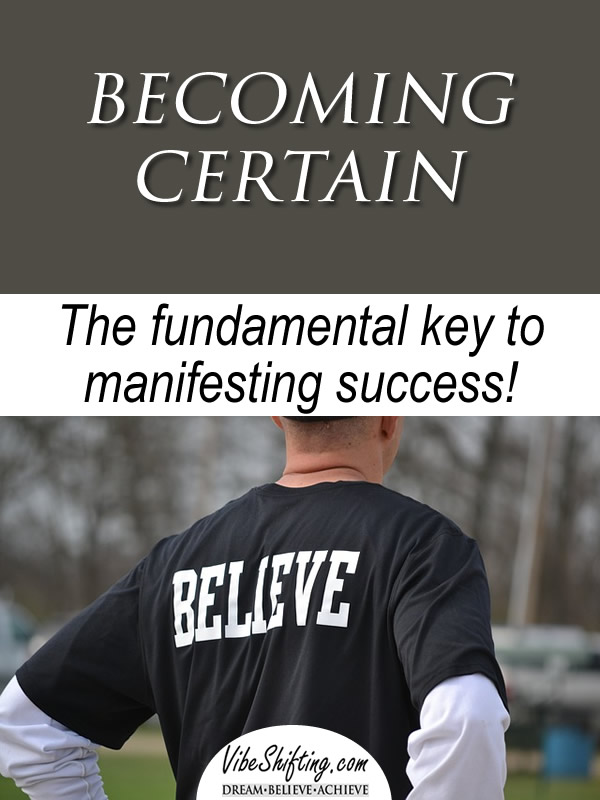 There’s a quote from Wayne Dyer that says “I’ll see it when I believe it.” And this, I have discovered, really is the fundamental, core truth that predicts the successful outcome of what you’re trying to create. Becoming certain that what you want is going to happen is the ultimate key to manifesting success.

What does becoming certain mean?

So what does this actually mean? It means that when you believe, at a fundamental, core level, that what you want will happen, that’s usually the point at which it does. Your beliefs and expectations have to be completely aligned with that desire before it can materialize in your physical reality. It may not be right that instant, but it usually happens fairly quickly once you have that calm, unshakeable certainty.

It’s not a zealousness thing – there’s a calmness to it; a sense of implacable, inescapable finality to it. It. Will. Happen. There’s no doubt, but there’s also no a sense of over-excitement or anything like that… it’s just a sense that it’s a given, and you don’t need to worry or fuss about it at all.

My own experiences with certainty

In my own life, I have had so many experiences with this phenomenon. Here are just a few:

– I just knew I was going to go to the University of Toronto, even though I was being told it would make considerably more financial sense to go to one of the schools in town, instead. I got accepted into my program of choice, on my campus choice, and I also managed to get jobs with the University during the school year, and great-paying summer-student jobs back home that paid my tuition and residence fees. I graduated with a degree in Cognitive Science.

– I just knew that I was going to get a government job in the computer science field when I graduated with that degree, even though I had no idea which department it would be in or who I’d be working for. I got hired three weeks after starting my job search, into a position that ended up leading me into the world of the Internet and web design.

– I just knew I was going to go to teacher’s college, even though I didn’t have the faintest idea about how I was going to make it happen. I talked to a friend who was a teacher, and she was so excited about the prospect of me becoming a teacher, too, that she walked me through the entire application process, telling me exactly what to expect and how to structure my application responses to what they were looking for. I was accepted and graduated with my second degree, a B.Ed in primary/junior education.

– I just knew I was going to marry a particular person, even though I had actually asked him out at one point and been turned down. I still had the feeling that this was going to happen (and I promise there was not creepy stalking involved or anything!), so I just continued on with my life as usual and stayed friends. We started dating the day I moved to Kingston to start my B.Ed., and got married a few years later. (Now, we did get separated recently, but that’s a different story!)

– I just knew we were going to buy a particular house that we’d seen in the listings, even though he didn’t think we’d be able to afford it and refused to even look at the listing because of that. Circumstances shifted around us and money came to use in very unexpected ways to allow us to make the kind of down payment that would leave us with mortgage payments we were comfortable with. We bought the house.

– When my marriage ended, I just knew that someone was going to rent me a townhouse that would be perfect for me and my kids, even though I had no idea how I was going to convince anyone to do that without a “real” job for proof of income. I got a great rental in an awesome location that has everything I wanted, plus several extras (like a walk-in pantry!) that I hadn’t even thought to ask for.

When you believe it – really believe it, that’s when it tends to happen. Time and again, this phenomenon has been proven to me. It’s like one of those universal laws that just is.

But why is certainty so important? Because it sends a signal out into the Universe that THIS IS. It’s like sending a wireless signal to a printer; once the request to print has been sent, you don’t worry about it and wonder if it’s going to work – you just know that it will. So you don’t even bother thinking about it anymore, really; once that request is made, it’s just a matter of waiting for it to actually print out.

All the tools and techniques that we use – the visualizations and affirmations and scripting exercises – all of these tools are really just designed to program our minds to come to this conclusion, this certainty that what we want is inevitable. It’s all about becoming certain.