1520 How Can People Be Horrible at What They Love? 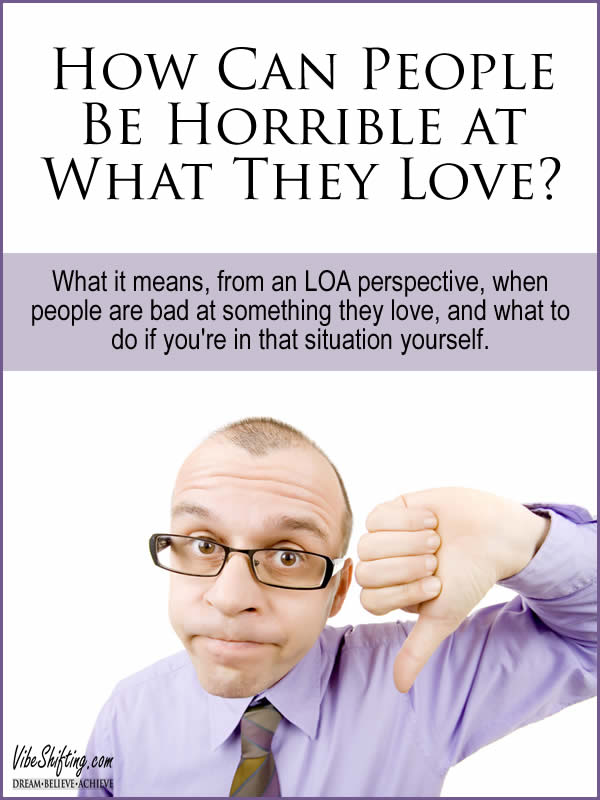 Today we’re talking about what it means when people are really horrible at what they love, and what to do if you’re in that situation yourself. And we’re answering a question I received via Facebook, from an awesome reader who asks:

Do you ever watch any of those singing contests where some contestants come on and they LOVE singing but they are terrible and have no sense that they are? How in those cases is their passion so out of alignment with their purpose? I just get confused by those people. And I hate the TV shows for making them look bad, too!

So, no I don’t watch those shows anymore, but I used to, and I do remember seeing some of those people. And you definitely want to keep in mind that anytime you watch a show like that, what you’re seeing is manipulated to induce a particular response in the viewing audience. The producers of these shows pick and choose which auditions you get to see and which parts of the audition you get to see. My understanding of the genre is that very little of “reality programming” is actual reality, so I suspect that some of the shock value of these “bad auditions” is designed specifically so that people will be just that – shocked.

Now, having said that, yes, there are people who absolutely love doing something (whether it be singing or dancing or what have you) and are awful at it, in terms of whatever the rest of the world considers technique or talent. They can’t sing in key, they can’t move their bodies to the beat, they can’t colour inside the lines to save their lives.

So what gives? Why would people be drawn to things they suck at? If LOA is true, then shouldn’t they be naturally awesome at the things they love to do? Yes and no.

Is it their performance or your taste?

First off, always keep in mind that when it comes to anything artistic, there’s a lot of individual taste and preference that comes into play in terms what people consider “good” or “bad”. For example, Picasso is considered one of the great masters of the painting world. So is Van Gogh. But I don’t personally like most of either of their stuff, and never have. There are an awful lot of other people, however, who think their art is exquisite and would probably scoff at the landscapes and more realistic pieces that I prefer.

And those who were seen dancing were thought to be insane by those who could not hear the music. ~Friedrich Nietzsche

When it comes to music, some think opera is the height of sophistication and taste, and other people hate it. At the other end of the spectrum, some people actually like death metal and other people (like me, for instance) avoid the genre like the plague. If your voice lends itself well to opera, you’re probably not going to be a great death metal artist, and vice versa.

Likewise, if you’re watching a hip hop dancer attempt a ballet piece for the very first time, you might conclude that she sucks at dancing, when in fact, it’s just not her particular style. And if you happen to be great at both hip hop and ballet, you might still struggle with ballroom. It’s all a matter of perspective and experience.

But what if they really do suck?

“OK”, you’re saying – “I get that. But what if they really do suck? If it’s not just that they don’t have the experience? What if they are completely tone deaf and trying to sing, for example?” Valid question. And the answer to that is that what may be happening in such cases is that this may just be part of their own journey; maybe there is something that they want to learn from the experience of wanting something but not having the talent for it.

Maybe they want the challenge of working to get better at something that’s important to them. Or maybe they want to experience a broadening of their focus – from a specific ability to an ability that encompasses something else within the general field. Maybe it’s not really singing that they love, for example; maybe it’s music in general, or it’s being in the spotlight, and they’re just starting to figure that out. Maybe what’s happening is a clarity issue.

We’re going to go into more details on that last point in just a minute, but first I wanted to address the question of what to do if you, personally, are in a situation where you love to do something but you suck at it.

What if I really want to do something and I’m bad at it?

I am always doing that which I cannot do, in order that I may learn how to do it. ~Pablo Picasso

If you’re in the situation where you really want to do something but you don’t yet have the talent for it, dig your heels in and be prepared to work at it. The only way to get better, to improve your craft is to do it. If you love to sing, but you can’t follow a tune, then sign yourself up for some lessons and do all the homework that you’re given. And in the meantime, don’t stop singing – if it makes you happy and fuels your soul, then sing!

But if your heartfelt rendition of “Love Me Tender” leaves your family in tears of auditory pain rather than empathy, then maybe save your serenades for the shower, when you can sing your little heart out without having to worry about other people’s opinions. Or sing while vacuuming the floor. (That’s a great one, by the way – if your lack of ability to stay in key bothers those around you, then volunteer to do the vacuuming and belt those tunes out with the roar of the machine.)

Likewise, if you want to write, but all you produce is garbage – keep at it. Don’t stop writing. You learn by doing. Sign up for a writing class or join a writers circle in your city – you’ll be able to get critiques from others on how to improve your ability. Google story structure, and read as much as you can. Make notes about how your favourite authors put together their stories.

If you hear a voice within you say you cannot paint, then by all means paint and that voice will be silenced. ~Vincent van Gogh

Remember that just because you have a latent talent for something – a potential to be good at it – it does not necessarily follow that you will be great at it from day one. I’m not sure I believe in the 10 000 hour rule for mastering a skill, but that doesn’t change the fact that the more you practice something, the better you are likely to get at it. Talent may be inborn, but skills must be acquired and polished.

And no matter what, if you truly love to do something, then by all means do it. And to hell with what anybody else thinks about it.

But what if I want to make a living at it?

In such cases, I usually advise people to look inside themselves and get really clear about what it is they really want. In the case of a recent email from someone who asked me about the modelling thing, for example, the question is: why does it have to be supermodel or nothing? I actually had to Google this ‘cause fashion really isn’t my thing, but there are apparently only 20 supermodels in the entire world. I suspect, however, that there is a lot more modelling work out there than 20 women can handle on their own.

So, if you love fashion and desperately want to be a model but you’re only 5’2” there are other avenues you could explore. Women of average height and those of us who happen to be shorter than that still buy clothes. And companies do have to show off the real clothes that they actually sell, so there’s definitely a market out there somewhere. It’s a matter of getting creative and looking for those other avenues, or creating them for yourself like Ben Barry did.

Ben Barry was 14 years old and in still high school when his friend was told by her agency that she had to lose weight or they wouldn’t submit her for photo shoots, so he acted as her agent and submitted her photograph for a shoot, which she subsequently landed, and thus he launched the Ben Barry Agency which, in later years, had a big role in launching the Dove Campaign for Real Beauty, which featured many lovely models who would never have made it via traditional modelling agencies.

Or maybe, when you start looking within, you might realize that it’s fashion itself that you love rather than the modelling and you decide to focus yourself on becoming a fashion editor for a magazine or a buyer for a major retail chain.

What is it that you really want?

What often happens when you start looking within is that you realize that what you really want isn’t necessarily what you thought it was. Maybe you realize that it’s not really the fashion or modelling that appeals to you – it’s the notion of becoming famous at something you think is fun to do. Well now – that’s something completely different than what you first thought, and it opens up a whole new range of possibilities, doesn’t it?

So maybe you realize that you love photography as well as fashion, and decide to become the next Annie Leibovitz and amass fame and fortune as a celebrated photographer. Or you discover that you just really love being in front of a camera and make it your goal in life to become the next world-famous late-night talk show host, or the next international YouTube superstar. All of these things could make you famous, and none of them require that you be a certain height in order to do it.

And that’s usually what I find is going on in these kinds of cases – where people seem to love doing something but don’t have the ability to do it well. It’s either a matter of lack of skills and technique (which can be learned if they’re willing to dedicate the time to practice, which they will be if this really is their passion) or it’s a matter of mistaken identity – in other words, they’re not yet clear on what it is that they really want. They believe they want to be a famous rock star, when what they really want is just to be famous, for instance. Clear that confusion up – find clarity – and they will usually go on to discover what it is that they have both a talent and a desire to do. They end up discovering their true passion and purpose, and they end up being absolutely amazing at it.

I’m going to leave you with a quote today – this one is for those of you who have had the experience of struggling with something that you love but feel you aren’t any good at. And it’s from Dale Carnegie and he said: “Develop success from failures. Discouragement and failure are two of the surest stepping stones to success.”

Have you ever been in a situation where you really loved something but weren’t very good at it? What did you do and how long did it take you to get better?