What to Do When LOA Scares You 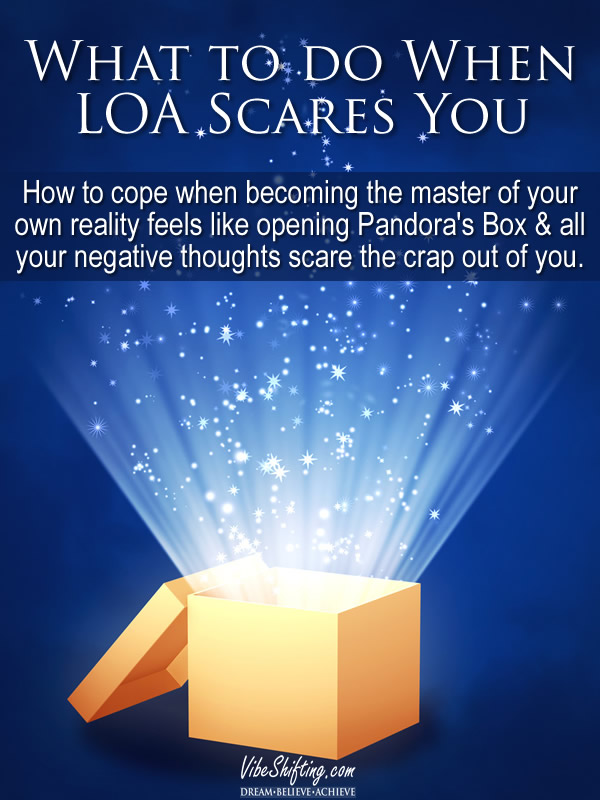 Does the idea of being the absolute creator of your own reality frighten you? Maybe you’ve recently come to the conclusion that all this mindset and LOA stuff really is real, but now you’re kind of freaked out about what that could mean, and you’re wondering what to do when LOA scares you.

Because, sometimes, when people start learning about things like Law of Attraction and how powerful their own minds really are, instead of getting excited about the possibilities, they go the other way and start getting frightened. They become deathly afraid of every negative thought that crosses their minds, and absolutely terrified that if they can’t control their thoughts, terrible things will start to happen.

The paralyzing fear of your own mind

In the barrage of emails I received in December and January, there was one email from a lovely reader who was writing to me from a place of very recent grief, and was also within days of being evicted from her home. She told me that what she liked to call “magic” (LOA) had kept her going through years of struggles, but that she had “opened Pandora’s Box” in an effort to heal and know the truth, and now she was paying for it, with a “life and death struggle” against her own “demons”.

She spoke of fear “shouting in her head and gut”, and “being tested” and “incredible pressure” to get out of her own way. I could feel her fear etched into every word, soaking through her psyche and practically dripping through my own computer screen from the other side of the world.

So much fear of something that could be so beautiful, if she could see it that way.

Legend has it that Pandora’s Box contained all the evils of the world… but there is no evil in this. There is no evil, period. What we tend to think of as evil is a mirror of our own fears. Dissolve the fears, and the evil never existed.

When you think of opening a box of magic, are you more afraid of what could wrong with it, or are you excited about all the beautiful things that you could do with it? Focus on the good — on what you want to see and create and experience. And remember that the magic exists within you… it has always been a part of you and always will be. You get to decided what to do with it.

What can you possibly manifest in your life, if you see the power of your own mind as something there to punish you for not being strong enough? If our fears about our own abilities are running rampant through our minds, it’s not a wonder that our physical manifestations would be less than ideal.

Let’s go Disney for a moment and think about Queen Elsa, from Frozen. She spent a lifetime being terrified of her own power. She hid herself away in her room for years and refused to have anything to do with the outside world. She was so afraid of hurting anyone. But the more afraid she became of her power, the more out-of-control it became.

It was not until Elsa realized that love was the answer. Once she chose love instead of fear, she realized just how easy it was to control her power. She realized how much fun they could be and how much joy they could bring, not only to herself, but to all the people of Arendelle.

What to do when LOA scares you

When you start panicking over your negative thoughts and what they could be manifesting into your life, just stop. Stop, take a deep breath, and remind yourself that the system is stacked in your favour — there is an unbreakable safety net built into our existence here. Think of all the times things have looked bad in your life, and realize that you’re still here and still standing.

When you start learning about LOA and start consciously looking at your negative thoughts, and realizing just how many of them there are, this should tell you how much the system works in your favour – because if you’ve been running that automated negative programming for so long, and are still managing to manifest anything positive into your life, then you KNOW that you are so much better at creating positive things than you are at creating negative experiences. The system is, in fact, set up to magnify the positive thoughts and minimize the negative ones.

Your positive thoughts are far more powerful than your negative thoughts, so when you start getting scared, grab onto that. Let the negative thought pass, and reach for a better-feeling one. You’re not going to be an expert at this stuff right away – none of us are. But you keep trying. And it does keep getting easier.